A country house is a great thing. Silence, clean air, the proximity of nature. But problems are being added. If in the city you are only worried about maintaining the interior of your apartment, then private ownership requires a completely different approach. Landscaping is especially time consuming. We have to cut grass and fight against unwanted vegetation.

Here, a trimmer comes to the rescue, using which you can tidy up the lawn and mow the weeds. There are two main types of such a tool: electric and gasoline. If you have a large plot, then the last option is better. Carrying a long extension cord is a tedious and unproductive task.

In order to cut off too tall grass a couple of times a season and remove weeds in the summer cottage, it is quite possible to choose an acceptable tool for little money. If you operate it in the mode declared by the manufacturer, do not overload it, it will last long enough. Of course, you should not expect excellent ergonomic qualities and high power in this case, but such models usually do not buy for hard work all day long. Usually, such trimmers successfully cope with the tasks set correctly, and small inconveniences in the form of low power or not too comfortable grip are redeemed by budget savings. 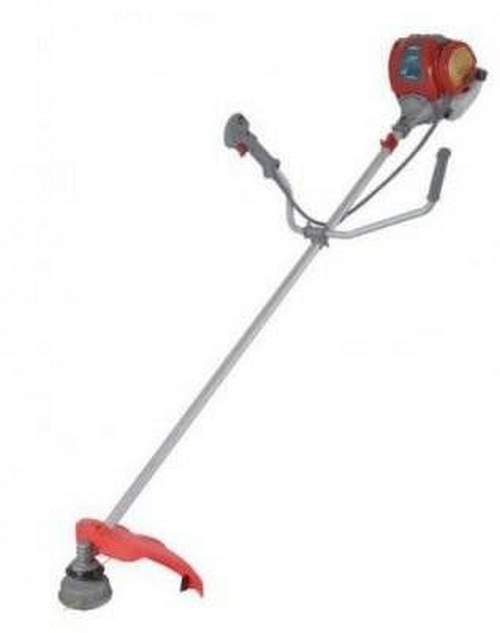 Most petrol trimmer models have a two-stroke engine. That is, their work requires gasoline mixed with oil in the prescribed proportion. Inside the mechanism, the oil separates and goes to lubricate the parts, and gasoline burns out. It is worth noting that two-stroke engines are often used in gasoline powered tools, and trimmers are no exception. There is nothing wrong with that, although it does cause some inconvenience. But here we have a full-fledged gasoline, four-stroke engine, for which fuel does not need to be diluted, and oil is poured into the engine separately. What are the benefits? Firstly, the power is significantly increased. This brushcutter, despite its compact size, has a power of 2.5 kilowatts, which allows it to chop even the thickest grass.

Secondly, the engine heats up less, which is also very important. True, there is one drawback. the weight. This model really weighs more than its counterparts, and only one shoulder strap is included. When buying this petrol trimmer, we strongly advise you to purchase a special belt for carrying on your back.

The review of the best gasoline trimmers for summer cottages got a model of Chinese production. AL-KO 112387. This is a fairly powerful model that perfectly copes with its direct responsibilities for mowing grass, weeds and young shrubs. The fuel tank capacity here is quite large. 0.7 liters. For comparison, the Stihl FS 55 will intervene in just 0.33 liters. However, this should not be considered the main competitive advantage, since a large tank gives the trimmer more weight. In addition, during operation, the device still needs interruptions to avoid overheating of the engine.

The fact that this trimmer was created for continuous operation indicates the presence of such an important function as an anti-vibration system, which significantly softens the load on the user’s hands. The boom of the AL-KO 112387 is not collapsible, which makes the structure particularly robust.

AL-KO 112387 FRS 4125. one of the most popular, inexpensive models that are often bought for domestic, country needs.

To begin with, its rated power is only 1.2 kilowatts, which is not so much for the brushcutter. A knife is provided on the bar to cut large grass, but in reality, the trimmer does very poorly. Simply put, for a summer residence this is a great option, but only on condition that you are not going to chop them with reeds or thick stems of grass. However, this can not be attributed to disadvantages, since in this price category of our rating most trimmers have such technical characteristics and this is the norm. If the tasks that you set are more difficult, you should pay attention to more expensive models.

Thanks to an engine power of 4 liters. with. Krüger, a German manufacturer of grass mowers, can easily cope with both harvesting dense thickets and cutting bushes or harvesting hay. Universality rare for such devices is provided by generous factory equipment: together with the trimmer, the user receives a set of keys, 5 good-quality knives for different mowing methods and 2 fishing reels. It is convenient to work, first of all, due to the surprisingly low weight (7 kg) with such an engine, and secondly, to bicycle handles with rubberized handles and a complete 2-shoulder knapsack belt, which distributes the load well.

Gardeners who, by virtue of experience, can compare several models of similar equipment, including the GTK 52-7 pluses, indicate easy start-up from the first try, almost complete absence of vibration, and a reinforced non-separable bar. There are no complaints about increased fuel consumption or fishing line, discomfort due to noise. on the contrary, the gas trimmer is very economical and creates an acceptable noise level. The official warranty from the company throughout Russia is 12 months, but with proper operation, the device has been functioning properly for many seasons.

The Huter GGT-1000T trimmer from the well-known German brand is distinguished by the affordable price for the product for many. At the same time, the brushcutter has sufficient power (1 l / s), thanks to which it is possible to cultivate garden areas with abundant vegetation.

The anti-vibration system significantly reduces the noise of a working product and dampens vibrations that adversely affect the user’s hands. The device is equipped with protection against accidental inclusion and the trigger gas trigger. Other characteristics: engine displacement. 33 cm³, tank capacity. 0.7 l., Knife rotation speed. 7500 rpm, the width of the mowed strip. 25 cm.