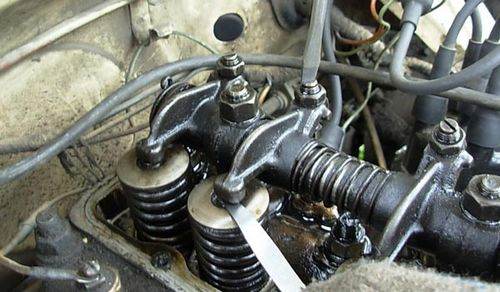 Valve adjustment is the setting of the necessary thermal clearance and is a mandatory procedure on motors without hydraulic compensators. If the specified gap is not adjusted, then the valve starts to knock. Knocking of valves can occur both due to increased clearance and as a result of clamped valves (for example, after incorrect adjustment). In both cases, with a violated gap, the valve mechanism resource is significantly reduced, the engine starts to run noisily, etc.

At first glance, it might seem that the use of hydraulic lifters on modern engines should completely solve this problem, since the design provides automatic maintenance of the required clearance. Unfortunately, the complexity of the system and the increased requirements for the quality of engine oil do not allow us to speak about the high reliability of the timing on units with hydraulic supports for valves in comparison with analogues that do not have such supports, that is, they require the need for adjustment. In other words, hydraulic lifters make operation more comfortable, but the reliability of the mechanism is reduced. For this reason, many automakers (both domestic and foreign) have not used compensators on their engines for a long time. Next, we will look at how to regulate the valves ourselves, since today there are still a lot of cars without hydraulic lifters on the roads.

When to adjust the valve

If your engine does not have devices to maintain the required clearance automatically, then you need to be prepared for the fact that every 30-35 thousand km. These gaps must be checked.

We add that many motorists, especially owners of domestic VAZ models, determine the need to adjust for the appearance of noise during the operation of the valve mechanism.

To begin with, although different engines may have certain differences, the general principles for adjusting clearances are similar for the vast majority of motors.

READ  How to Adjust a Lawn Mower Valve

On motors that involve adjusting the clearance with special adjusting washers, setting thermal clearances is easier. Standard tolerances on such ICEs are up to three times greater. For example, on VAZ models with adjusting washers for intake valves, a clearance of 0.2-0.25 mm is recommended, for exhaust this figure is 0.3-04 mm.

It turns out if the 0.15 mm probe does not fit into the gap between the washer and the camshaft or the 0.25 mm probe. Freely passes into the gap, then adjustment of the intake valves is required. As for the graduation group, then the check is the same, only you should focus on the values ​​of 0.3 and 0.4 mm.

Now let’s move on to the adjustments. On VAZ models, the procedure is performed using a special tool that is mounted using standard nuts and washers on the cylinder head cover mounting studs. Then the shaft rotates until the cam of the adjustable valve “looks up”. Then it is necessary to remove the engine oil, which will be located near the pusher. An ordinary syringe is suitable for this. Removing the oil will make it easier to set the pusher, and it will also be more convenient to remove the washer.

READ  How To Make A Cultivator From A Trimmer

Next, you need to turn the pusher so that a rectangular cutout opens. You can use an awl for this, a screwdriver is also suitable. After that, press the lever of the special tool, after which the pusher will “drown”. Thanks to this action, it becomes possible to install a stopper between the side and the camshaft. Now it remains to pry the puck with the same awl or screwdriver. You can finally remove the washer with tweezers.

Now you need to pick up new washers by thickness or evaluate the condition of the old ones. New washers are marked on the outside. First, measure the removed washer with a micrometer. If the wear is within the normal range, then you can leave the element and move on to other valves. Strong wear of the adjusting washer will require replacement of the part, which is selected from the existing new washers taking into account the required thickness based on previously performed measurements of the removed element. The completion of the adjustment process is considered the installation of a new washer. Washers are put into the pusher so that the marking is at the bottom. After that, the pusher is "recessed" again, after which the clamp is removed.

To avoid the “clamped" valves on the classic VAZ models, it is necessary to take into account the fact that the rear surface of the camshaft cams may not be ideal. This shaft runout is sometimes around 0.04 mm. For this reason, it is necessary to additionally check the clearance. This is done when the cam is in the following positions

To solve the problem, you will need to install the camshaft in a position where the mark on the gear will get the upper direction. Then check the clearances of valves 4, 6, 7 and 8. After that, crankshaft must be rotated 180 degrees, that is, the camshaft will rotate 90 degrees. After turning, you can check the 7, 4, 3 and 1st valves. In this way, the 3rd, 1st, 2nd and 5th valves are checked, and then the 2nd, 5th, 6th and 8th valves. Please note that measurements of all valves should have the same end result. If the results are different, then when setting the gap, it is necessary to take as a basis the place where the gap is minimal (the most "clamped").

Some masters can easily adjust valves on imported cars with the help of a special tool for VAZ, making certain changes to the design of the device. It is also common practice to use only one pusher lock, which is selected in size. The procedure boils down to cranking the crankshaft until the pusher “drowns” the camshaft cam.

It is worth noting once again that for the accuracy of the measurement it is optimal to cool the engine to 20 ° C, and then make measurements. Gaps must be measured at least twice. The camshaft needs to be turned taking into account a full turn. If the gaps do not match, then the measurements need to be repeated. For an accurate determination, it is optimal to have several probes of different thicknesses on hand.

We add that the use of large or smaller shims was highly discouraged. This should be understood as the installation of small washers, as well as a slight turning of elements of a larger diameter before installation. In such cases, a reasonable way out may be the usual rearrangement of the washers already on the motor in places. The fact is that these parts are heavily loaded. The initial mismatch to the required dimensions in a smaller direction and any third-party manipulation of fitting can lead to accelerated wear of the washers, malfunctions in the engine or failure of the internal combustion engine itself.