How to choose an angle grinder.

Each type of grinder has a different effect on the surface being machined. But unlike the tape and eccentric, the angle grinder grinds most aggressively.
Peeling operations are performed by small and large angle grinders with wire brushes installed. They remove scale, rust, old paintwork and slag crust from the metal after welding, while sisal and polymer-abrasive brushes brush the wood.
Grinding with a change in surface geometry, chamfering, and sag removal is performed by abrasive grinding and flap discs mounted on an angle grinder.

The model range of the majority of manufacturers represented in Ukraine: Makita (Makita), DWT (DVT), Proton, Dnіpro-M, Stern is presented in sizes: 115, 125, 150, 180 and 230 millimeters. The number indicates the outer diameter of the tooling to be installed, on which the rotation speed and electric motor power depend.
In everyday life, a tool is classified into: large 230 mm, medium 150, 180 mm and small angle grinders 115, 125 mm. It is believed that the 125s are models for the home, and the 230s for use in construction and industrial applications.
This judgment is conditional, since the size of the circle indicates only the cut to what depth can be performed.

The disadvantages of small grinders.

The weak side of the mini angle grinder is the shallow depth of the tool entry into the material. So at 115mm Sturm AG9511 the disc is immersed at 25-30 mm, and at 125mm Energomash the angle grinder-90111 at 30-35 mm.
This size of the resulting slot is enough for cutting reinforcement, angle and rolled steel with a small shelf, cutting the gates in the wall for wiring and a water pipe. But when cutting, the outer edge of the abrasive disk wears out intensively, reducing with each cut an already shallow diving depth. If the outside diameter of the snap-in is not enough for a small angle grinder, then a workpiece, for example a 57 mm pipe, will have to be cut not at a time, lowering the disk vertically, but scrolling around the circumference. Which is inconvenient, because each time you have to reload the part in a vice.

The advantages of a small angle grinder.

Light weight.
A 125 mm angle grinder, such as the Union UShS-90122, weighing 1.45 kg, is easy to cut tin, for example, when bodywork with a car or tile for decoration. Hands get tired less and the mini angle grinder is easier to control than the average 150, 180 mm and large 230 mm models. It is easier for her to crawl for cutting from different sides to a fixed workpiece with inconvenient access.

Safer work.
During deep cutting of thick-walled parts, during the deviation of the disk plane from the vertical, it is jammed while the tool stops and is thrown to the side. Since 115 and 125 mm small grinders have a small immersion depth of the tool in the material and their own weight, it is easier for the worker to hold the angle grinder in case of jerks.

A strong grip is reinforced with ribs on the non-slip plastic of the case, like the Einhell TE-AG 125/750 or rubber pads, like the Vitals-Master Ls 1272HL.
To turn on without assistance and intercepting with the second hand, the wide Start key is installed on the side and the slide type, like the Stanley STGS9125. It does not need to be felt, it is always in the thumb area and due to this the angle grinder is controlled even through the glove. To increase passive safety on small one-handed angle grinders, keys with a shear force above the average are set, like in the Dnipro-M MSHK-800.

Such a tool is convenient for short trimming and local grinding. For example, in a limited space under the bottom of the car, in the engine compartment, in a position above your head or standing on a stepladder when a worker hardly reaches an object even with his outstretched hand.
Work with wire brushes with one hand is inconvenient, since heavy equipment has a greater moment of inertia and drift.

See also  Can I Install a Non-Diameter Diameter Disc on a Grinder?

Despite the name, even one-handed angle grinders, for which the body is used for the main grip, are equipped with an additional removable handle screwed into two or three fixing points on the gearbox.
Titan PSUM11125E, Proton MShU-125/1150 Semi-Pro are equipped with more powerful electric motors, for placement of which it was necessary to increase and extend the body. With them, the second hand is no longer used to clamp the workpiece. Such a tool is held with both hands, but due to a reliable grip, it has become easier to control the position and wiring of the equipment. Cooling has also improved, since on one-handed ventilation openings partially overlap with the palm of your hand.

Inconvenient for making precise cuts, such as cutting pores in welds of thin-walled pipelines. A weight of 6.7 kg, as with the GA9040RF01, is more difficult to control for accuracy of immersion depth. Large angle grinder cutting discs start with a thickness of 2 mm or less, compared to 0.8 mm for small 125 models.
Even a physically strong worker can hardly cope with the force of a jerk when a tool is jammed. But a cutting depth of up to 85 mm, for one dive without turning the workpiece, can be performed only by large angle grinders, such as DWT WS22-230 D or Titan BSUM20230. Cut through more interfere with the dimensions of the body. You can also go a little deeper by tilting the angle grinder, but the cut will no longer be perpendicular to the surface.

The function of reducing the speed of rotation of the snap is present on all models except the 230s. For example, Intertool WT-0209 under the 180th disk or Dnіpro-M MSHK-1600R under the 150th. But most often it is installed on a small angle grinder with a 125 circle, such as the Proton MSHU-125/1150 Semi-Pro or AEG WS12-125 XE.
On the basic 125 versions, the rotation speed is in the range of 10-12 thousand revolutions per minute and does not change. the angle grinder with adjustment has a regulator in the end of the case or at the top of the main handle, which allows them to be reduced from the maximum to 2800, like the Makita GA5040C, or 6000 rpm, like the Intertool DT-0272.

Why is the lower limit not kept to a minimum?

an angle grinder with speed control provides more opportunities for grinding and polishing, but not cutting. Deep scratch removal is not performed at high speeds. A fur coat or foam head mounted on a rubber sole-sole will be torn off, the rubber platform will start to smoke, the polish will fly off the equipment. Traces of burning will remain on the wooden blank, and the plastic will soften and melt.
The impact of felt, foam rubber, wool, sisal or polymer-abrasive wheel is performed at low, but different speeds and the wider the speed range on the angle grinder, the more opportunities for processing. 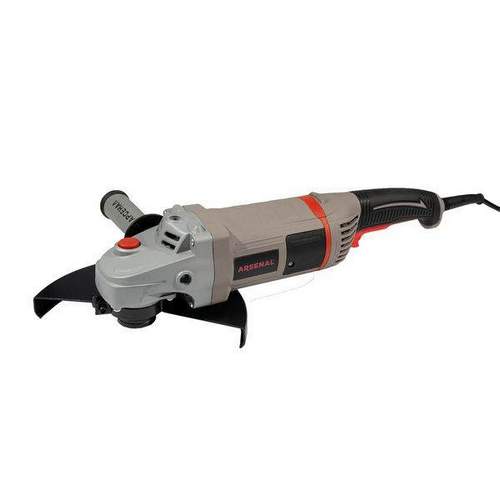 However, the cooling system of the electric motor of the angle grinder depends on its rotation and at reduced engine speeds, the motor, especially under high load, quickly overheats.
For professional models of most manufacturers: AEG WS12-125 XE, Makita 9562CRV, Flex LE 14-11 125 the lower limit is 2800 rpm. On a household tool, you can also find 1000 rpm, like the Titan PSUM11125E. The operation of such grinders requires more attention from the user and periodic inclusion in the maximum idle speed mode to increase the flow of cooling air.

Often, customers want to choose an inexpensive angle grinder with these custom features, like the Makita GA5040C.
By pressing the start key, the user feels a sharp jerk associated with a quick set of speed snap. over, the heavier it is, for example, a cleaning grinding disc, the more tangible the tool is trying to break out of its hands.
The user experiences inconvenience; from the peak load exceeding the rated load 3-5 times, the gears of the gearbox suffer; the mains voltage is sagging. It can knock out electric machines and plugs, “choke” and stall a low-power gas generator if the angle grinder is powered from it without a soft start.

Is the softstart function the same for all tools?

Not. And the speed of reaching the operating mode and user experience are different. With the Flex L 3406 VRG, the unwinding of the tool takes 1.5 seconds and is very gentle. At Makita GA9040RF01 jerk, although small, but felt. And at Fiolent LNA 1-20-230 acceleration occurs without twitching, but in two stages.

The most powerful angle grinder.

The requirements for angle grinders for grinding are completely different. Grinding wheels 6 mm thick are heavier and their unwinding requires additional watts. When peeling, many locksmiths strengthen the clamp, trying in one pass to remove a larger layer from the surface and crush the engine. When pressed, a low-powered engine is more difficult to rotate and it is faster to overheat.
When cutting workpieces, friction occurs at the end of the disk (1-3 mm), and when grinding, the angle grinder is tilted and the contact width of the mopping disk is several centimeters.

When choosing powerful large grinders for stripping parts, such as Dnіpro-M MSHK-2700 (2700 watts) or Titan BSUM26230 (2600 watts), the requirement for weight fades into the background. Grinding is carried out under the own weight of the tool, and not on weight, only by controlling the tool path and slightly pressing.
Among the small angle grinders, the leaders in power are: Forte EG 14-125L with 1400 watts, Makita GA5021C with 1450 watts, Svityaz SKS 15-125 DR with 1500 watts.

Why are they divided into garage and for production.

Professional angle grinders like the AEG WS 24-230 E are operated harder and often by hired workers, not so loyal to the tool. They exert pressure when grinding, trying to quickly clean; do not give time for cooling with strong heating of the motor; do not pay attention to the sparking of graphite brushes when their resource approaches the minimum.
In conditions of production and continuous use, more accidental falls; power surges; breaks and deformations of the network cable; dusty work; more significant production of wear of a number of nodes.
This is all taken into account by manufacturers.

The design of household grinders, like TechAS TA-01-421, does not provide reinforced units for high loads, which will not be with a five-minute switch on weekends when cutting tin in a garage. In addition, any master saves the purchased tool and carefully treats it.