Stihl chainsaw carburetors have a story. In 1958, Stihl for the first time in the world developed a membrane-type Flieger carburetor, with which the chainsaw can work in any, even upside down. Over time, only such carburetors began to be used on all chainsaws in the world.

Which carburetor is installed on a Stihl MS 361 chainsaw

The Stihl MS 361 chainsaw is equipped with a modern C3R. S 236 diaphragm carburetor with an integrated fuel pump. Manufacturer. Stihl. When assembling its chainsaws, Stihl does not use components from other manufacturers, for example, Walbro, as many companies of other brands do. Carburetor Stihl MS 361 is well thought out constructively, economical, provides stable engine operation at any speed. 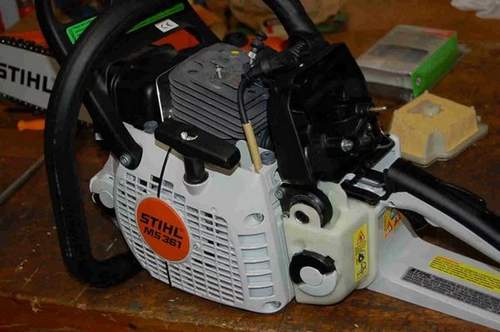 Device and principle of operation

Fuel from the gas tank enters the carburetor, is sprayed there, mixed with air, the formed fuel-air mixture is fed into the combustion chamber. A mixture with a high content of gasoline is called enriched. If there is more air and less air, the mixture becomes lean. The composition of the mixture is adjusted with adjusting screws. The carburetor is considered a complex device, because it provides the internal combustion engine in three different modes. cold start, idle and at maximum speed.

During a cold start, gasoline is pumped up with a pump (primer button). At this point, an enriched mixture with a large amount of gasoline enters the still dry combustion chamber, which facilitates starting. At start, the choke is closed.

After starting in the combustion chamber during the operation of the internal combustion engine, a vacuum is formed in which the fuel-air mixture is sucked in automatically.

At idle, the throttle is closed, the flow of the mixture is limited.

When you press the throttle, the throttle opens slightly, increasing the flow of the mixture and the speed of the engine.

The function of the membrane is to shut off the fuel supply to the storage tank from the gas tank when it is full, and to open when the fuel becomes low.

Accumulative capacity is sometimes called a “float chamber” by habit, although there is no float in membrane carburetors.

In the “throttle to full” position, the throttle and air damper are fully open. The flow of gas in this mode is regulated only by a calibrated hole in the high-speed jet. The adjusting screw H during adjustment can reduce or increase the flow of gasoline through this hole. Screws L and LA regulate single and small turns.

Three adjusting screws are mainly for factory adjustment. After assembling the carburetor and the saw, each of them is adjusted one at a time, on special stands, taking into account the characteristics of each Stihl MS 361. chainsaw. The screws are securely fixed and do not loosen spontaneously during operation. Adjustment is rarely required. Namely:

In other cases, most often, idle speed adjustment is required if the engine stalls in this mode.

A feature of the Stihl MS 361 chainsaw is easy access to the carburetor. It is enough to remove the cover and air cleaner. Therefore, no tool is needed for adjustment except a screwdriver. For professional adjustment, a tachometer is required. It will show the number of idle and maximum revolutions. Proper adjustment should provide 2500 rpm at idle and 10,000 rpm at maximum speed.

The Stihl MS 361 chainsaw can develop 12,500 rpm, but it is not recommended to operate it in this extreme mode.

In the absence of a tachometer, maximum revolutions are determined by ear. Single. in two boundaries: the chainsaw should not stall when idle is low, the chain should not move when speed is too high.

Before adjusting, make sure that the air filter is clean. If it is clogged, there may not be enough air to completely burn the fuel mixture. Therefore, the engine does not work correctly. Perhaps adjustment is not required, but you need to clean or change the filter.

The filter is removed and they try how the engine works without it. If good, then the problem is in the filter.

An engine without an air filter cannot work for a long time, only a test run. Debris trapped inside the engine could damage it.

The presence of soot in the spark arrester grille and silencer is also checked. If the exhaust outlet is difficult, the engine also does not work correctly and the problem is not in the carburetor setting.

In addition to the manufacturer’s recommendations, there are practical points for adjusting the carburetor.

When turning any screw, the factory setting changes. Therefore, it is extremely important to remember or record the number of revolutions by which the position of the screws has changed during adjustment. For example, if the screw is fully tightened, it must be tightened, always counting the revolutions. Only this will make it possible to return to the factory settings if it proves unsuccessful.

Adjustment is carried out only on a warm engine, otherwise it will turn out to be incorrect. a cold and a warm engine work differently.

Adjustment of high speeds is easiest to carry out with the engine running. Screw N is turned in small steps 1/4. 1/2 turn in one direction or another. By pressing the throttle stick, they try how the engine reacts to a change in setting. Changes in revolutions are determined by ear or by tachometer.

After adjusting high revs, it is often necessary to adjust the idle speed adjustment.

The author of the video shows an example of the original Chinese-made carburetors that are used on the Stihl MS 361. Zam chainsaw. Carries out its comparison with the German Walbro carburetor. Also gives an example of a fake carburetor. The video is very useful, it is recommended for viewing by both beginners and experienced. We thought the problem was in the carburetor, but it turned out he was completely out of business here, everything was much more serious.

The original Stihl chainsaw carburetors have no technical flaws. This product is from German manufacturers, technically thought out and modern. The cross-sections of the channels and the throughput of the calibrated holes are precisely calculated.

An engine with such a carburetor does not consume excess fuel, but is capable of operating at full power. Suitable materials are used for its manufacture. The metal is not oxidized, it is strong enough. Plastic parts are not corroded by gasoline and last long enough.

The original Stihl chainsaw carburetors do not break even because the carburetors on any chainsaws do not experience large mechanical and temperature loads. Failure in the original carburetor of the Stihl MS 361 chainsaw can only gaskets and a membrane. After many years of use, plastic can change its properties, become hard or brittle. In this case, you can purchase a repair kit and replace old parts.

It is extremely rare to buy a new carburetor assembly, only in exceptional cases.

But no manufacturer can give a 100% guarantee of eternal work for their products.

Sometimes carburetors from Stihl MS 361 chainsaws are bought in order to install them on chainsaws of other brands of similar power.

Today, there are at least four types of carburetors for the Stihl MS 361 chainsaw on sale.

The huge price range suggests that some of them are non-original, counterfeit and low-quality carburetors.

Stihl chainsaws are famous for their reliability, so the need for adjusting the carburetor and its repair is very rare, if such a need still arises, it is better to entrust the tuning process to specialists in their field, if only because you need to have a tachometer to set the maximum speed.

If you have an urgent need to set up a carburetor on a Stihl MS 361 chainsaw, then strictly follow the algorithm and recommendations described in the article. And then, if possible, contact a specialized center as soon as possible for fine tuning, it will extend the life of the chainsaw.