The following materials are used for the manufacture of ceiling plinths:

Each option has a number of characteristics, so they need to be considered separately.

How to properly cut the ceiling plinth in the corners. options and methods for plinths made of different materials

Ceiling skirting boards are special parts designed to visually separate walls from the ceiling, as well as to mask the joint between them. Such skirting boards are used almost everywhere and well complement the interior of the room. Installation of skirting boards is quite simple, but it has a number of nuances. for example, to connect individual parts, you need to cut them off correctly. How to properly cut the ceiling plinth will be discussed in this article.

By and large, expanded polystyrene is a type of polystyrene that has an increased margin of safety. The cost of products made of extruded polystyrene foam is slightly higher compared to foam, but the reliability of such skirting boards is much higher. It is already problematic to break such a detail.

Cutting styrofoam skirting boards requires any sharp tool, such as a construction knife or a hacksaw. Due to their high strength, it is much easier to work with such products. they practically do not break or deform during operation. There will be less waste in the end.

Styrofoam fillets are one of the cheapest options. However, the advantage in the form of low cost is offset by a large number of disadvantages. In particular, the foam itself is a rather brittle and soft material that is very easy to break. Even if you just squeeze such a product in your hand, it can deform.

Due to the low strength, it is very difficult to handle foam skirting boards. If there is little experience in cutting such parts, then most of them in the process of work will become unusable, so all the benefits from the cheapness of the skirting boards will be leveled. A hacksaw or a well-sharpened knife is usually used to cut foam fillets.

Polyurethane skirting boards are the most expensive products. The high cost is due to a large number of advantages, among which are excellent resistance to moisture, high mechanical strength, reliability and elasticity. For most situations, this option will be optimal.

However, there are exceptions. polyurethane does not withstand temperature extremes. If you place such skirting boards in the kitchen near the stove, then over time, the polyurethane will deform and crack. Cutting of such fillets is carried out with a special knife, and no complications arise during work.

The inner corner cutting technology is as follows:

READ  How to cut foam rubber at home evenly

Pruning with a miter box

To give the plinth the required angle, a special tool is used. a miter box. Structurally, this tool is a tray made of wood, metal or plastic. In certain areas of the miter box, there are vertical slots that allow you to cut various parts at an angle of 45 or 90 degrees.

complex devices can be found on sale, in which, in addition to the angles already described, there is a possibility of a 60-degree cut. There is also a professional miter box equipped with a swivel mechanism. This tool differs from the simplified one in that it has the ability to fix the cutting blade at any angle. You need to know how to properly glue the ceiling plinth in the corners so that everything looks beautiful.

Cutting the skirting board in the corners without special tools

The question of how to properly cut off a 45-degree angle on a plinth can be solved without a special device. To do this, perform the following actions:

The disadvantage of this method is the need to keep the saw on weight during the cutting process. 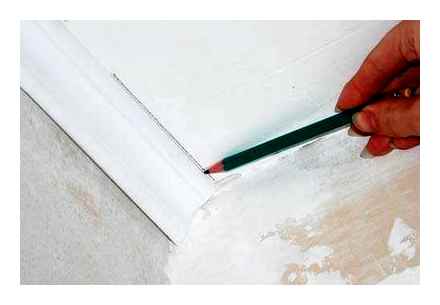 How to cut a ceiling plinth in the corners. options and methods

Ceiling skirting boards are an integral part of the finishing of the ceiling space. With their help, cracks and wall defects are masked, they can be used to cover the irregularities of the suspended ceiling structure or wallpaper. In addition, skirting boards complete the interior of the room. One of the problems in the assembly process of these elements is the perfect joining in the corners. The question of how to cut a plinth to the ceiling in the corners is solved in several ways.

Working tools when solving the problem of how to properly cut the ceiling plinth in the corners are selected depending on the material from which the plinth is made, since each of them has its own processing characteristics:

Working with outside corners

As a rule, there may be external corners in the rooms, which also need to be pasted over with skirting boards. The question of how to cut the skirting boards at the corners of the ceiling in this case can be solved in the following ways:

READ  How to cut an external ceiling plinth

How to cut a plinth for a ceiling

First, a miter box is used to properly cut the skirting board. This device is a special tray that allows you to cut wood, plastic or other materials at the desired angle. The miter box can be purchased in a retail network or made by hand; in the first case, a saw may be included in the kit. However, a tool available from a home craftsman for cutting materials may well be used.

The device has a recess into which skirting boards or boards are inserted. There is also a saw slot with an inclination of 45 and 90 degrees. For example, you can consider how to cut corners on a ceiling plinth at an angle of 45 0 using a miter box.

Such a process involves the following actions:

How To Install The Inner Corner of Cornice Mouldings. Orac Decor Installation Video

Many rooms boast angles that do not correspond to 90 degrees. Such situations arise as a result of shrinkage of the soil and the structure itself, as well as in violation of the technology of wall construction.

In this case, the correct marking using a miter box or drawing will not work, all actions are performed directly on the spot:

The miter box can be made by hand using wood or metal. The width of the workpiece can be different, the main thing is that it does not exceed the size of the hacksaw, in this case, such a task as cutting off the corner of the ceiling plinth will be easier to complete.

The manufacturing process is as follows:

With the help of a factory-made or self-made miter box, you can speed up the process of cutting skirting boards up to 10 times. This is especially important for craftsmen who regularly carry out repair work and are faced with the task of how to cut a ceiling plinth.

READ  Which Mower Is Better

Trying on the ceiling plinth: the joining of the parts should be perfectly even. If the result is not achieved and there are irregularities at the joints, you can trim the edges with an ordinary knife to a perfect fit.

How to cut the corner of a skirting board evenly

When cutting soft materials (PVC, expanded polystyrene), use a metal hacksaw or an ordinary construction knife. Then the work will be neat and with smooth edges.

The first way is with a miter box

The miter box usually looks like a tray with vertical holes for a hacksaw. It can be made of wood, metal or plastic. This tool is the oldest and simplest carpenter’s tool for cutting wood pieces at 90 ° and 45 ° angles. There are types of such a device for professional work, with a rotary mechanism, in which the cutting tool can be rotated and fixed in any position.

How to cut a ceiling plinth correctly

Ceiling corners are divided into internal and external, the method of joining on them is slightly different.

If necessary, you can make a miter box with your own hands. To do this, you need three trims from plywood or boards of the same size. First, they are applied in the form of an inverted letter “P” and the corners are marked. Then, according to the marking, slots are cut out for a hacksaw almost to the very bottom, and the boards are twisted.

For the inner corner, you can use the simplest way of perfect joining. by marking on the ceiling. Another example of how to cut a corner nice and even.

The end result is an even 45 ° angle when you draw the line from the point of intersection to the edge of the part. Note that the above marking method works only for perfectly flat corners.

With a good eye and accuracy of hand action, you can use a homemade template that resembles an imitation of a miter box. To do this, take a thin board or thick plywood and draw a layout in the form of a horizontal rectangle. Using a protractor, mark 45 ° on the right and left sides of the rectangle. Draw mowing lines connecting opposite edges. You can now cut off the ceiling plinth using this layout. The actions are simple and similar to the description above in the first option. Only the ceiling parts should not be inserted, but placed on the drawing and the hacksaw should be combined with the layout of the layout. 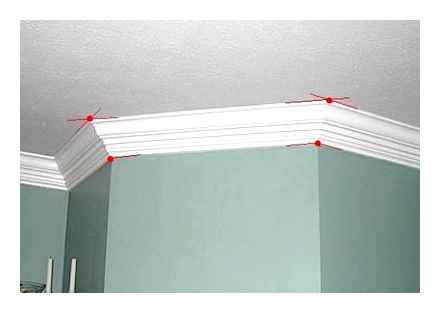