P.S. Buying the above ignition is not possible, but if there are a couple of places, then at the price of half a chainsaw, that is, it is very tasty. 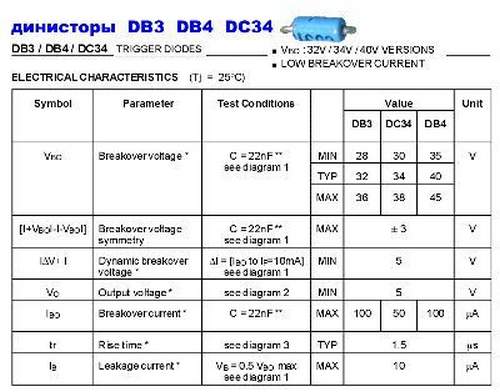 “I only know one, and even that
domestic, electronic
ignition system
(it was called MB-1, stood
on chainsaws, walk-behind tractors and
small boat motors)
whose magnetic field
one of 4 magnets
rotor was directed
towards the 3rd others,
momentum of this magnet with
Reverse polarity
opened the power thyristor.
Naturally with time,
with this arrangement, "
maybe so?

In the end, you can try the diode, is there a marking on the board? photo will be interesting to see

In the end, you can try the diode, is there a marking on the board? photo will be interesting to see

He set the zener diodes from 3 to 33 V. Below 5 V there is a shift of spark formation to the end of the oscillator, above 30 V, spark formation begins at high crankshaft revolutions. I optimally selected about 9 volts. With a diode in direct connection, the shooting range opens after three half-waves (at the end of the oscillation). I can’t take a photo, everything is flooded using super-glue-soda technology, only the side of the tracks is left, and actually there is a 22 cm scarf.
Filled, because it was urgent to work with a saw, and there was no time for disassembly.
I understand how the circuit works; the positive half-wave through the VD3 VD5 diodes and the primary of the coil is lit up by the conder. Parallel to this, through the divider R1 R3 R4 in the UE of the thyristor D1, it receives the cradle of opening it. (Checked, it opens at 3 volts on the winding).
When a negative half-wave arrives, the current passes through the VD2 R2 R5 circuit from the coil to ground, and through the zener diode in the UE of the thyristor D2. after it has opened, the current in the circuit increases, an increase in the drop of the creep occurs on R5, since the entire cortex of the coil is applied to the circuit VD2 R2 R5 R5 VD4 D2.
At some point, the potential on UE D1 through the open diode VD6 will be sufficient to open it. D1 opens and shunts further influence on D2 (in reality now at small (approx. 1000 rpm) several openings / closures of D2 take place. Then only D1 opens and shunts UE D2). Conder C2, I suppose, serves for the following; when a negative half-wave arrives, sparking occurs, D1 opens, (C2 does not seem to play a special role here, except for a slight delay in opening. Then there is a positive half-wave, during which the D1 shooting range opens and charging of the same C2 occurs. When the positive half-wave is already It’s over, there’s still some potential on the Conder, and with the next (third) negative half-cycle, D1 is always open, (what I wrote the third half-wave is stupidly cut off) the whole cramp fits to VD2 R2 D1
Today I put a 9 volt zener diode, tried to turn it with a drill. In general, at 3000 rpm, the spark interferes in the linear region, but it seems to me that it should interfere at a lower speed. I measured the amplitude on the storage conder, at 3000 rpm 250 V, the pump coil contains 3000 turns, I’ve thought about adding another thousand and a half, the pressure will increase, the thyristor seems to hold by the date of 500 volts. At the same time, the pressure will increase for the opening of the shooting gallery, just got into the right area.

Everything is thoroughly rechecked, the faulty is replaced. only two unknown ones. the zener diode and the exact number of turns in the pumping coil. The zener diode burst during splitting, and the coil had to be cut lengthwise, so I did not count the turns.

Yes, but for adults and powerful things. For "mopedok", if only it worked. Do not bother with power. Leave 2000 turns and saw!

My ignition module died in the trimer, the Homelite garlic trimer, looking up to the Chinese era, pulled familiar sellers, they were warm, a normal braid, but since 2006 they have not been holding it.
I found that it looks very similar to the module from the 351/352 partner, but it costs a lot. I bought Chinese (11 bucks), started it, it works at idle, a little gas, a shot at the exhaust and then it stalls. Changed under the "guarantee" I put the same eggs. I and the gap and shift, nevermind.
And then the neighbor just dragged the Partner, the chain lubrication disappeared, picked it up, let me check the module. I put it on the saw, the horse play works like a clock, the partner’s on the trimer, sneezes and stalls again. He began to sin on the flywheel (magnets). I’m taking it off the saw, and they are the same O_o, Well, bah yes, both Amarakans. and the saw’s dowel is also cut off on the saw blade (the repairmen probably squinted, he didn’t make out)
I put the saw from the trimer, everything works ok. And with the cut-off key on the trimer, it is just possible to twist the ignition earlier later.
A little twisted. Bingo, trimer earned like new. That is, in the native module, for some time the master chain is tortured.
Well, figs with her.
Saw received a "new" flywheel, and the chain lubrication, plows with a bang.
Scythe, universal module, and “smart” flywheel. also sneezes what is needed

READ  How to Sharpen a Chainsaw Chain on a Loom Video

How to set the ignition on a chainsaw

Do-it-yourself chainsaw repairConfirmation level: 51.16%
Fragments of the text of the post:

…Repairs chainsaws do it yourself Chainsaw with all desire, it can not be attributed to complex devices. And nevertheless, repair chainsaws can take a lot of time. No repair instructions chainsaws does not replace simple logic. All faults chainsaws can be divided into two main groups. Engine malfunctions Engine malfunctions chainsaws occur quite often, it is their detection and correction that takes the most time from users. Carrying out repairs chainsaws with your own hands, you need to act by the method of exclusion. to check in turn all the possible causes of the malfunction, starting with those that take less time to check and fix. System ignition…… Almost all types of engine malfunctions listed above can be caused by system malfunctions ignition……System ignitionchainsaws. 1. flywheel with built-in magnets, 2. module ignition 3. candle, 4. high voltage wire. If the candle is dry, it means that the problem is most likely not in the system ignition but in not entering the fuel mixture into the cylinder. put a cable on the candle ignition. The reason for the lack of sparks may also lie in the faulty module ignition or violation of the gap between it and the flywheel magnetic circuit. Violation of the gap becomes especially likely if the saw was disassembled before removing the flywheel and module ignition. 2 mm placed between the flywheel boss and the module ignition. Faulty module ignition need to be replaced. thus checking the system ignition and without detecting a malfunction, you can proceed to the fuel mixture supply system. Manufacturers chainsaws recommend replacing the fuel filter every 3 months. As a rule, repairs chainsaws cannot do without cleaning the air filter, because it gets dirty quite quickly. The carburetor is one of the most complex devices chainsaws therefore, it is necessary to start disassembling and cleaning it with a full understanding of the responsibility of this operation. Carburetor chainsaws. Carburetor chainsaws. Carburetor chainsaws. Disassembled carburetor chainsaws If there is no experience and self-confidence, carburetor repair chainsaws it is better to entrust a specialist to a service center. chainsaws should not be lower than 8-9 atm (0.8-0.9 MPa). Chain lubrication system A rare repair manual chainsaws dispensing with the failure of the chain lubrication system, which are quite common. Replacing wearing parts Some parts chainsaws subject to natural wear and tear, must be replaced after a certain period of operation. If you do not replace the wearing parts in time, their excessive wear will adversely affect the other components chainsaws…… Tire chainsaws it wears out especially in the area that is cut most frequently, usually the bottom side of the guide rail. for cost-effective operation chainsaws always spend together. Read more: http://mashom.ru/post_1349975163.html

Chainsaw device Degree of compliance with request: 23.77%
Fragments of the text of the post:

…Device chainsaws Chain Three types of links are included in the chain: cutting, driving and connecting links. Such chains are usually used in household chainsaws and high-profile professionals. Tire chainsaws it’s a chain guide. bar and chain, removable parts chainsaws therefore they are called a headset. Lubrication system chainsaws…… chain brake chainsaws You probably yourself understand that a light touch of a moving chain chainsaws Enough to get a serious wound. Time for how much will happen stop chain, depends on two factors. Engine chainsaws Most modern chainsaws have a single-cylinder 2-stroke carbureted air-cooled engine …… (although there are “top models” equipped with separate oil barrels and mixing the oil in automatic mode) In order to reduce the weight of the engine in chainsaws install plastic sumps (which are not designed for continuous operation). Air filter chainsaws. Air filter on chainsaw works in special conditions. Starter chainsaws Most often, it is a rope with a handle wound on a pulley. Carburetor chainsaws this is one of the most important nodes. clutch chainsaws All modern chainsaws equipped with automatic clutch. anti-vibration system chainsaws Job chainsaws It creates vibrations that, after prolonged exposure, have a negative effect on health. Storage chainsaws After finishing work, it is necessary to prepare it for storage. Read more: http://mashom.ru/post_1351924991.html

READ  Ignition For Motor From Chainsaw

Installation of a shower cabin Degree of compliance with the request: 10.05%
Fragments of the text of the post:

.Installation shower cabins The first models of shower cubicles went on sale around the end of the 1980s.Installation shower cubicle alone was then quite a challenge. setting such a device is so simple that in the presence of little experience and free time it is possible to conduct it, moreover, independently, without resorting to the services of masters. Their setting involves the coupling of the finished structure with the lined surfaces. Therefore, for setting such tools need to be prepared by the shower. The building order and angle, a special plumb line and a pencil for marking the place will also be needed setting……For setting the shower cabin itself needs to be prepared with a saw, a puncher or a drill, mounting corners. At the moment, when everything you need is already at hand, you can also run over to direct work on setting shower stall.Installation do-it-yourself shower cabin We’ll figure out how to install a shower cabin ourselves, and the help below will help us with this. setting shower stall.Installation do-it-yourself shower stall starts with setting shower tray. details: http://mashom.ru/post_1349347087.html

How does a chainsaw work? Degree of compliance with request: 9.36%
Fragments of the text of the post:

…How does it work chainsawInstallation tires and chains on chainsaw. pull the chain chainsaws turning the tensioning screw clockwise. the correct chain tension on chainsaw necessary for a long service life of the saw set, cutting accuracy and safety. Refueling chainsaws Fuel and chain oil. Hold tight chainsaw on the ground when you start the engine. Sharply pull the starter cord with your right hand until ignition.Chainsaw equipped with automatic gas control. The suction should be returned to its original position at the first ignition otherwise there will be a fuel overflow in the carburetor. Disconnect the inertial brake, raise chainsaw and press the gas several times to feel how the saw reacts to gas. You need to start sawing with the part of the tire located closer to the body chainsaws. details: http://mashom.ru/post_1353260793.html

Design and launch of a Husqvarna chainsaw (Video) Degree of compliance with request: 5.67%
Fragments of the text of the post:

Chainsaw ignition system and its adjustment