One of the representatives of the Japanese chain of household chainsaws of the Japanese company Makita, which are supplied to Russia, is Makita DCS34-35. In this article, we will conduct a short review of this model. Consider its characteristics, pros and cons, major malfunctions and how to fix them.

Purpose and use of the Makita dcs34 chainsaw

According to the manufacturer’s recommendations, the Makita DCS34 chainsaw should be used to solve simple problems that occur in everyday life. It is ideal for trimming pillars during the construction of fences. It may come in handy for cutting tree branches or making firewood for kindling a bath or for igniting a barbecue. 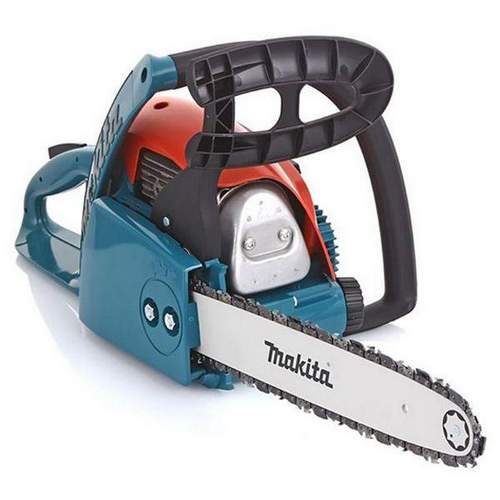 If the Japanese knew where their chainsaw is actually used, then they would be shocked. Makita 34 can be found at the sawmill, where she is sawed by everyone to whom she falls into her hands. It is interesting that the quality of the fuel and lubricants, as well as the proportions of the fuel mixture in such conditions are not respected or approximately respected. But Makita, even in such "barbaric" conditions, is able to work long enough.

Also in our country, Makita can be found in small logging plots, where harvesting is not industrial, but private, but the volumes are also large and you have to work a lot. Of course, Makita DCS34-35 cannot cope with felling with its low-power engine, and no one will even try, but it is convenient to cut the knots, it allows weight and power.

Since the resource of Makita DCS 34-35 is not designed for such conditions, after some time it will necessarily get into repair. But this does not stop anyone, because the cost of a household model and a professional one has a significant difference, and with self-repair it turns out to be more profitable to use a household model.

READ  How To Disassemble A Stihl Chainsaw

We offer you to watch a video about the Makita chainsaw, in which the seller talks about the advantages of this DCS 34-35 model.

Now consider the basic characteristics. The Makita DCS34 chainsaw engine is a two-stroke, diaphragm-type carburetor with a built-in fuel pump that runs on a pulse from the crankcase. This is the standard scheme by which almost all modern gasoline saws are arranged.

The engine power is only 1.3 kW, but thanks to its high revolutions and torque, the chainsaw confidently saws trunks up to 40 cm in diameter. The second version of this saw with the DCS4610 marking has a power of 1.7 kW. All other characteristics, appearance and components of the DCS34 and DCS4610 are completely identical. Fuel tank 0.37 liters. Oil reservoir 0.25. One refueling of the chainsaw, under normal conditions and with the correct carburetor adjustment, should be enough for half an hour of continuous operation, in DCS4610 the fuel will run out a little faster, since it has a larger volume.

A drawback of the Makita DCS34 35 compared to competitors such as the Stihl 180 or Husqvarna 142 is the manual. It is standard, but for some reason the Japanese did not consider it necessary to translate it into Russian.

And since the majority of buyers of this model are unprofessional, and for many this chainsaw is the first, there are situations when Makita was used incorrectly and she quickly stopped working.

For those who want to read the instructions and find the information in it useful, it will not be difficult to look through and get acquainted with at least pictures, from which much becomes clear. For example, from the picture you can determine the proportions of the fuel mixture, find out the algorithm for installing the tire and chain.

The gasoline saw has a complex structure. The engine, carburetor, clutch and starter, all this undergoes serious loads during operation and breaks over time. But there are malfunctions that happen much more often than others, and we will talk about them further.

This is one of the most common situations that happens, but not always due to a malfunction.

If these points are met, but the chainsaw still does not show signs of life, then you must proceed according to the following algorithm:

READ  Gasoline Does Not Receive Into The Cylinder Of A Chainsaw

This is one of the common malfunctions, the causes of which may be several. The first is a malfunction of the carburetor or its incorrect adjustment. To eliminate it, it is necessary to adjust the screws for the quality and quantity of fuel that are on the carburetor.

The second is the pollution of the air filter, as a result of which the engine lacks air and floods the candle. In such a situation, there is one caveat: during the first cold start, the saw should start up and die out immediately and will not start up with further attempts to start.

If you do not have experience in diagnosing and repairing gasoline saws, then it is not advisable to repair a Makita DCS 34 chainsaw yourself, since it is possible to aggravate the situation, which will increase the final cost of repairs.

The most common mechanical malfunctions of a Makita DCS34 chainsaw include the critical wear of the drive sprocket or chainsaw tire. You can solve the problem by replacing parts with new ones. The sprocket is removed easily, because it is mounted on the shaft with a washer and stopper.

To remove, unscrew the side cover and remove the tire with the chain. Next, remove the stopper from the shaft, then the washer and after it the sprocket is removed, connected to the clutch drum.

The sprocket rotates on the shaft with a roller bearing, which must be lubricated with lithol before assembling the saw.

Everything is going in reverse order.

Makita DCS34 moderately powerful, lightweight and reliable chainsaw which can be a great helper in the household. Although the saw has some problems, for example, with instructions and the search for spare parts, it still takes a leading position in the ratings of gasoline saws. Buyers love this saw for well-balanced quality and price.