Cutting profile pipe at an angle of 45

As a result, it will split along the mowing line, forming a fairly flat cut point, which, if necessary, can be additionally processed.

When a large diameter pipe needs to be cut, a variety of special attachments and tools can be used. This may be required if, for example, a pipeline needs to be repaired.

There are other options for the implementation of the task, such as the use of plasma, waterjet or laser cutting, but in private use they are practically not used.

One of the particular examples of this situation is the need to cut a metal pipe at an angle of 45 degrees. This cutting of material is often required when laying plumbing or heating systems. In this case, you have to deal with steel pipes.

For these purposes, the usual cylindrical pipes are usually used. If we are talking about the installation of some kind of metal structures, then profile pipes of rectangular or square section are more often used.

The main problem here is that in order for the connected elements to coincide, the cut must be as even as possible, which means that especially close attention should be paid to marking the material.

In the event that cutting at an angle is required, a simple square sheet of paper can be used as a marking template. It must be folded strictly diagonally, and then wrap the pipe with a template.

READ  At What Angle Is A Chainsaw Chain Sharpened

In this case, it is necessary to carefully ensure that the side of the sheet, which is located closer to the end of the pipe, is perpendicular to its central axis. Next, using the marking material, a number of dotted lines are applied and after the marking is done around the entire circumference, the template can be removed.

If the profile pipe is to be cut, then it is advisable to make a special template from the same pipe, but with a larger section. In this case, you only have to use the measuring devices once. For marking, you will need to use a protractor or construction square.

After sawing off the template, the pipes to be cut can simply be inserted into it and marked. This approach will significantly save work time and it will be convenient to cut a profile pipe at 45 degrees.

As for what to use when carrying out work, here it is worth choosing the most suitable and familiar. It can be a simple hacksaw for metal, and an angle grinder with an installed cutting disc.

How to cut along

Another frequently asked question is how to cut the pipe straight lengthwise with an angle grinder. Here the algorithm of actions will be approximately the same as for cross-cutting. It is important to pay attention to the marking.

You can, for example, use a painter’s thread, which is usually used when marking walls. In this case, it is necessary to rigidly fix the pipe. The sawing process itself must be done carefully and slowly, since when sawing long elements, there is a high probability of the cutting disc slipping off the mowing line of the marking.

It is important to ensure that the edge of the sheet is even and matches the entire circumference. After marking, the cut element is fixed and cut is made.

The video shows the process of cutting a pipe at 90 degrees.

At least once, but you wondered how to cut the pipe exactly at least 45 or even 90 degrees. Either along or across. We give answers to these questions.

Quite often, when performing various construction or repair work, it becomes necessary to cut the pipe. It can be plumbing work, laying pipelines or installing heating systems, but in any case, it is necessary to know how to cut the pipe exactly. Some of the features of this task will be discussed further.

How to cut a profile pipe straight

Any suitable tool can be used for sawing. If you have to cut a lot of pipes, then it is advisable to make full-fledged templates from scraps. In this case, the measuring and marking work will have to be done only once.

How to cut thin walled pipes

Another type of pipes are thin-walled products. They are usually made from non-ferrous metals such as aluminum or copper. Cutting thin-walled pipes is more difficult, since there is a high probability of deformation of the element. In this case, you can use some kind of filler, such as sifted sand.

As a tool, you can use an angle grinder, a hacksaw for metal or a special machine. It all depends on the specific situation.

Cutting metal pipes is a rather laborious, but do-it-yourself process. At the same time, work with round pipes does not fundamentally differ from cutting a profile pipe. The main thing to remember is that when performing work, you must follow safety rules.

How to cut 45 degree pipe with high precision at home

When carrying out work on the installation of gas or water mains, it is often necessary to change the direction of the mowing line, while the pipeline is cut and then welded at the desired angle. Most often, the direction changes by 90 degrees, and the question arises. how to cut the pipe at 45 degrees in order to accurately connect the joints when welding.

It is possible to cope with the problem with cut edge angles of 45 or 90 degrees with the appropriate knowledge and techniques that will help save not only time, but also materials during work. At other angles of rotation, it is impossible to solve the problem with a ruler and a sheet of paper. you will have to call computer equipment for help.

The main difference between cast iron and ordinary steel is its high brittleness and large wall thickness; its accurate cutting must be performed in the following sequence:

supports under the part put a wooden shield or board.

To make a high-quality even longitudinal cut, you can use a simple device in the form of a metal corner. It is securely fixed on a flat wooden surface with screws and the pipe is pressed against it with a heavy load. An angle grinder makes a longitudinal cut of the pipe top, slightly resting the disc on the surface of the angle.

The corner can be attached to the pipe with clamps and a cut can be made along the upper wall of the corner in the same way.

One of the most common ways to make a pattern for pipes with a round surface is a method for which you will need a lined sheet of paper, a ruler and a pencil. To obtain a paper pattern, proceed as follows: 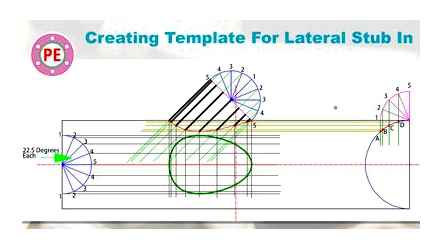 In order to obtain branches of metal pipeline lines in the form of tees, a collar insert is used, for which it is necessary to cut the edge of a round pipe adjacent to the walls of another at a right angle. To implement the method, proceed as follows:

Usually, in order to turn the pipe by 45 degrees, fittings are used, bends with a 45-degree rotation angle, made of the same material as the pipes themselves, if the pipes are steel, then the turns are welded from steel. For HDPE pipes, there are electrically welded or cast bends at 45 degrees (note that it is almost impossible to find compression fittings with such an angle of rotation in Russia).

But, if you still need to cut a round pipe made of steel or various types of plastics, then for this you need a piece for cutting pipes at an angle, the shape of which is calculated manually or by machine. The task is greatly simplified if at an angle of forty-five degrees it is necessary to cut a metal profile of a square cross-section.

For a quick cut, you can use a regular sheet of paper folded diagonally to mark the surface for the future cut. Using folded paper, proceed as follows:

For sawing, you can use an angle grinder with a disc for metal, drawing a thin line at the beginning along the markings, and then gradually deepening it until the edges are completely separated.

When working with an angle grinder, the following factor must be taken into account. if the edges are completely cut off, the disc can be damaged by an acute angle, which will lead to its failure, and in the absence of protection on the angle grinder, even to employee injury. Therefore, it is advisable not to cut the corner edges to the end, but to leave a narrow groove and then break off, subsequently grinding the protrusion.

How to cut a large 45 degree pipe

It is better to cut a large-sized product in a domestic environment using a large angle grinder or a gas burner. the walls with large diameters are usually thick. Cutting is best done in segments, leaving narrow transitions that are removed at the end.

Cut a Perfect Miter Joint/Corner Joint in Metal Tubing with a Handheld Grinder!!