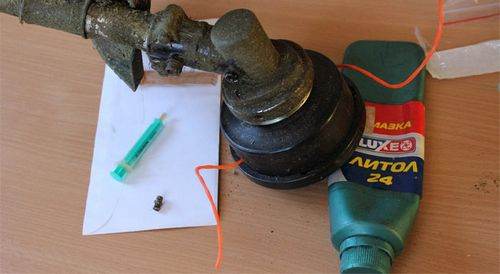 Sometimes, in the midst of intense grass mowing operations, your trimmer begins to make unpleasant, grinding sounds. This complains about the lack of lubrication of the gearbox – the most intensively loaded unit of the device. And soon, these “warnings” may be followed by jamming of the drive …

What grease should be used for the trimmer gearbox?

In the process, the mechanical part of the trimmer is loaded with contact forces on the teeth, resistance reactions from adhering grass (sometimes with dirt), dynamic, impact loads due to constantly changing torque. The grease for the trimmer gear must fully take into account these features, so the selection of the brand must be strictly individual.

The lubricant consumption also depends on the temperature at which it retains its lubricity. When the gearbox is heated to 40 ° C, it is considered that its operating conditions are satisfactory, and there is enough lubrication.

It is believed that there is no universal lubricant for the trimmer gear, but this is not entirely true. In fact, a suitable lubricant will be one in which the following components are present:

These requirements are fully met by Gear Grease OREGON or Champion EP-0 lithium greases, domestic compositions Oleo-Mas, Litol.24, or Azmol 158, as well as those recommended by the manufacturer of a particular trimmer model.

How to lubricate the trimmer gear?

In the upper part of the housing, where the gear block is installed, there is a technological hole, which, when the trimmer is operated, is plugged with a screw. This screw is unscrewed, and 1.5 … 2 ml of grease is introduced into the hole using the nozzle on the tube. If the lubricant was purchased in a different packaging, then for this operation, a regular disposable medical syringe is also suitable.

After that, the screw is installed in its original place. This procedure, regardless of the user’s recommendations, should be performed every 10 … 15 hours of operation of the trimmer in operating mode. Other reasons for updating or replacing the gearbox lubricant are independent minor maintenance work (for example, cleaning and washing the gearbox gear before the summer season), repair of the unit, preservation of the trimmer for the winter period, etc.

If the gear unit is disassembled, it is recommended to completely remove the remains of the previous grease from the surface of the parts, even if it does not have any signs of oxidation and contamination. And only then apply new grease. After applying the lubricant, it is recommended to turn the shaft manually several times, and make sure that the lubricant is evenly distributed over all parts of the gearbox.

When lubricating, special attention is paid to the following elements:

The operation of the joint of equal angular speeds (or, as people say, grenades) is very important for the operation of a front-wheel drive car. Thanks to this element, torque can be transmitted from the transmission to the wheels. At the same time, the element is subject to quite serious loads, so for its normal operation requires regular maintenance of the part. We’ll talk about which lubricant for CV joints is better.

What is lubricant for?

Any competent motorist understands what lubrication is for. With its help, premature wear of metal elements that are subject to friction is prevented. In addition, such a substance can reduce the load on the components, give them the ability to rotate freely.

Grease for CV joints also performs a number of other important functions. Thanks to it, you can greatly reduce fuel consumption, as well as reduce transmission losses of the machine. In addition, such a substance can prevent the occurrence of corrosion (namely, rust, mainly, is the cause of failure of CV joints).

If you are thinking about what grease can be replaced with, then you should choose substances that sparingly relate to organics and synthetic polymers. Indeed, for additional protection of this unit from external influences, anthers made of plastic or rubber are used. It is important that the grease does not dissolve such materials.

Based on the lubrication tasks for the tripod and other types of CV joints, the characteristics that such a substance should possess are also obtained:

Next video about the choice of lubricant for SHRUS:

The main types of lubricants

At the moment, there is a fairly large selection of lubricants for CV joints, which differ in their composition. They can also vary in their efficiency, price and features of operation. Now we will talk in more detail about all popular types of lubricants.

They arose almost immediately after the CV joints themselves. As a result, such a substance is in good demand.

The composition is based on lithium solution and organic acid. As a result, a yellowish viscous substance is obtained, which thickens with decreasing temperature, so it will be much more difficult to smear it in winter. With the help of compositions of this type, loads on drive elements can be reduced a couple of dozen times.

At the same time, the high conservation properties of the substance are pleasing. It prevents dust, dirt, moisture and other elements from penetrating the metal elements. At the same time, such compounds are very aggressive, so they can dissolve anthers. Read the manual for your car. It indicates whether lithium is acceptable for lubricating joints.

Recently, greases of this type have become somewhat less popular, giving way to more innovative options. At the same time, they can still be found in the market. The most popular options now are XADO, Very Lube and RENOLIT.

A more progressive version, which is done all with the same lithium soap, only now the additive is molybdenum disulfide. Lubricating properties are the same as in the previous version. At the same time, molybdenum compounds differ in one important advantage – they have high anticorrosive properties.

The use of metal salts in the composition of salts helped to achieve this, which replaced some acids. In addition, the substance is completely safe for rubber and plastic elements, so that it does not lead to premature wear of the boot.

Of the minuses of such a substance, it is worth highlighting low resistance to moisture. As a result, if even a little water gets under the duster, due to certain chemical reactions, the composition turns into an abrasive. This only contributes to friction, which leads to a number of breakdowns of the CV joint. To prevent this situation, you must regularly check the site.

Among the most popular options available in our country, it is worth highlighting SHRUS-4 and LM47 lubricants.

Recently, such a CV joint grease is in increasing demand in the market. The progressive composition allows you to extend the life of the hinge, as well as protect it from a number of negative influences. The main advantage here is that the substance is completely not afraid of moisture.

Thus, if anther rupture occurs, there is no need to change the substance. In addition, the grease perfectly resists corrosion, and is also suitable for use even in fairly aggressive conditions. The composition is chemically neutral, so that the anthers will not be damaged, regardless of the material of the seals.

The main disadvantage of such a substance is its relatively high price, which is due to the complexity of the production process. We produce only ShRB-4 grease, everything else has to be purchased in other countries.

At the same time, the latter option is even more expensive. As another drawback of this composition, it is worth highlighting its inability to withstand low temperatures.

What lubricants should not be used

There are also a number of compounds, the use of which is not recommended. In particular, it is worth highlighting such varieties of compositions:

READ  What Oil To Pour Into A Trimmer Reducer

Below we have prepared for you a short list of the best substances that are perfect for lubricating the hinge in your vehicle. At the same time, before applying the composition, you should familiarize yourself with whether it is specifically suitable for your car.

The domestic model, which has become widespread in our country. Belongs to the category of lithium mineral lubricants. The temperature regime here reaches from 40 to 120 degrees. The cost is quite low.

This product is manufactured for us in factories located in Germany. The basis of the composition is molybdenum disulfide. The operation of the substance is shown at a temperature of 30-120 degrees.

The composition is resistant to moisture, including salt water. The cost is 2-3 times higher than in the case of domestic counterparts, but here you pay for quality.

Products are manufactured in Ukraine. The option is of good quality and reasonably affordable price. First of all, models are used to protect external CV joints.

There is no molybdenum disulfide in the composition, but there are revitalizants – substances that significantly slow down the wear and deformation of not only the hinge itself, but also a number of other components and mechanisms. The grease can withstand temperatures from 30 to 140-150 degrees

The lithium composition demonstrates excellent performance (it can be used at temperatures of 40-250 degrees). The American tool is suitable for lubricating both external and internal CV joints. At the same time, the cost here is very affordable.

Another domestic lubricant SHRUS. It has a black color. As a thickener, lithium soap is used. Even in case of anther rupture, the substance will not leak. The working range is between 40-120 degrees. The cost is quite low, which is the main advantage of the composition.

How to replace grease

When the question of how to replace the grease is resolved, you should think about how to perform this process. It is worth noting that the procedure is notable for its simplicity, so that even the most inexperienced drivers can easily cope with all this.

It is only important to follow the following points:

It is also important to clean the inner walls of the housing from the substance:

How often to change grease

In addition, if the vehicle has not been used for 9 months, or rarely used for 18 months, it is also recommended that the substance be replaced. At the same time, in some cases, the composition must be prematurely replaced, so it is sometimes worth checking the condition of the lubricant.

We strongly recommend that you replace the CV joint lubricant regularly, following the instructions and rules established by the vehicle manufacturer. Remember that the cost of such a procedure will be much lower than repairing or replacing the hinge itself. As for the choice of substance, the modern market offers a fairly large assortment of lubricants. There is no need to save and buy the cheapest substances. Better trust trusted manufacturers. Moreover, the difference in price will be relatively small.

Next video about the best lubricant for SHRUS: