How Many Degrees To Cut Ceiling Skirting

The quality of the ceiling finish greatly affects the appearance of the room. Therefore, they try to do everything perfectly, or very close to this. The finishing touch during the design is the ceiling skirting. They give the finish a complete and holistic look. The strips themselves are mounted on flat surfaces simply: on a special glue of white color, but there are problems with the design of the corners. Without knowing how to make the corner of the ceiling plinth correct, a lot of material deteriorates. We will tell how and how to cut it in the corners.

The very first skirting boards on the ceiling were made of plaster. They were cast in special forms, then the solution was installed on the ceiling. Such curly ornaments of the fillet were called. Today you can see them infrequently: they are expensive, but outwardly they are almost no different from cheaper options. And the name is almost lost.

The most popular today are ceiling skirting boards made of polyurethane or polystyrene. They are inexpensive, look great, easy to install, have a wide range of profiles and patterns. Width can be from 5 mm to 250 mm. They are used in almost any room decorated in any style. An exception is wooden houses with an appropriate interior. Here, wooden products are most often used. the style dictates its conditions. 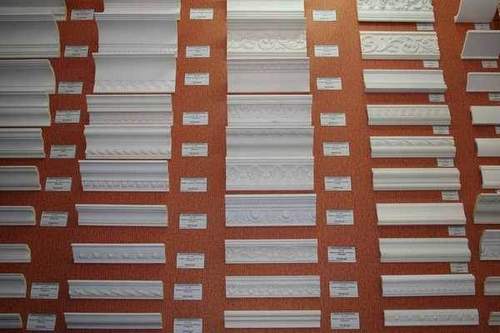 There is also a similar finish made of plastic. It is mainly installed in bathrooms. But even in damp rooms, you can safely install polyurethane slats. they are not afraid of dampness.

To cut the ceiling in the corners of any material you need in one of the ways described below. An exception is only plastic skirting boards: you can make such a corner only using ready-made corners.

How and how to cut

Working with skirting boards from different materials implies the use of different cutting tools. When working with a ceiling plinth made of wood, it is more convenient to work with a saw on wood. All others, including plastic ones, made of polystyrene foam and other polymers are better cut with a metal sheet. It turns out a more even cut, less burr. Saws are usually used when working with a miter box.

See also  How many revolutions does a chainsaw have

When working with foam baseboards without special devices, they are cut with a good clerical knife. Its blade is quite thin and even, the cut is smooth, not jammed. If you are working with a polyurethane or polystyrene saw, do not press hard: you can mash.

In general, to get a little used to the tool and material, take some piece and practice on it: cut, saw, cut. So at work there will be less problems.

How to get the right angle

Most of the problems when working with ceiling skirting boards arise when decorating corners. Since the surface of the products is complex, simply cutting it out at the right angle will not work: it is still necessary to trim so that they fit together and preferably without large gaps. There are actually several ways to make the corner of the ceiling plinth perfect (or nearly).

If the corners and walls in the room are even, you can use a special carpentry tool. a miter box. This is a chute in the form of an inverted letter "P", in which the lines for cutting are marked at an angle of 90 ° and 45 °. A part is laid inside, in which it is necessary to make a gash, a saw is inserted into the guides. The part is held in place, cut at the desired angle.

It looks like a miter box. Can be plastic, wooden or metal

In the case of skirting boards, not everything is so simple: they must simultaneously adjoin two surfaces, therefore they need to be pressed to one or another wall of the miter box. When working with ceilings, they are pressed in the side closest to you.

Video: How Many Degrees To Cut Ceiling Skirting

The sequence of actions when finishing the outer corner you need to make a gash at an angle of 45 degrees. Put the miter box in front of you. Try on how the baseboard will be located, determining which part of it will be attached to the ceiling. In order not to get confused and cut the ceiling plinth correctly, lay the bar that will be located on the right, on the right, and the one on the left. on the left.

How to cut a corner on a ceiling plinth: correctly install it in the miter box

The part that is on the ceiling, press to the bottom of the miter box. The second side is closer to you and raised. You lean it on the wall of the device so that it does not stagger when cutting. That is, the front part of the baseboard is turned away from you. Do the cut direction, as shown in the photo below. Putting the two pieces cut together, you get a protruding. outer or outer corner.

The sawn off parts are first applied to the place “dry”, without applying glue. If the geometry of the angle is not so perfect, you can slightly correct it with a knife. Small errors are easier to cover with special putty.

With the inside corner of the ceiling plinth, the situation is very similar. First, try on which side will be on the ceiling, press this part to the bottom of the miter box, rest the second part on the wall closest to you and make the cuts as shown in the photo below.

And again, first try on without applying glue, if necessary, slightly adjust. Then apply a thin strip of glue on both surfaces that will stick to the wall or ceiling.

Your own version of how to use the miter box is shown in the video.

Few people in apartments or houses have angles exactly 90 °. Small deviations are easily corrected after fitting. But not always. Then you have to mark everything “in place”. under the ceiling.

You will need a thinly drawn pencil (hard. it is not so visible on the ceiling, but leaves fairly clear marks near it), a small piece of the baseboard, a ruler and a good stationery knife if you work with baguettes made of polyurethane (polystyrene) or a metal saw for working with other materials.

Plinth is applied to the corner, draw a pencil along the outer edge. Attach to the other side of the corner, also mark. You got a cross on the ceiling, the center of which marks the place where the planks of the ceiling plinth should meet (see photo). Having installed a piece of the plinth in the corner, which will be glued there and resting it with the butt on the wall, transfer the mark to it.

Now take a ruler and connect the edge of the baseboard with the marked mark. If you simply put the baseboard on the table and cut it off in a line, in the corner the two parts still will not work out: the inside will interfere. You can trim it later, trying on the ceiling. The second way is to install the piece that you want to trim on the table, the part that will be on the ceiling. And cut along the line, but holding the knife at an angle of about 45 °. Correction will still be necessary, but much less (and less likely to make a mistake).

See also  How to cut an external ceiling plinth

Repeat the same operation with the second bar. Put it to the desired wall, abut the butt on the adjacent wall, mark the place where the cross is drawn, draw a line and then cut it off. Correction Is carried out "dry" without applying glue.

You repeat the exact same steps for the outer (protruding) corner. Now you know another way of how to make the corner of the ceiling plinth, without using scythe or other special devices.

There is another, easiest way. For skirting boards made of polyurethane or polystyrene, use ready-made, factory decorative corners. They are installed in a corner, planks are glued to them closely. If necessary, cutting them is very simple: by a few millimeters with an ordinary clerical knife.

Examples of finished corners for fillets

How to dock in the corners

If the installation of the first corner is completed, we can assume that you have already learned to do almost everything. “Almost”, because you still need to learn how to connect the corners and cut the trims along the length. When some part is already glued and a small distance remains to the corner, how can one not make a mistake with the length? The answer is simple: leave the stock.

At first, you can cut a piece 10-15 cm longer: it will be possible to redo it several times if something does not work out right away. Then you make an angle as described above, try on a dry one, customize everything so that the result suits you. Only after that can you put the already trimmed bar into a corner and note the place to which it can be shortened. Trim exactly 90 °. It is not necessary to use a miter box. Just try to put the knife (hacksaw) perpendicular to the surface.