How Much Time Do I Need to Charge a Screwdriver Battery

Screwdrivers have long been invariably popular not only among professional builders, but also ordinary people, because these units are indispensable when you need to screw something or, conversely, untwist. The versatility of screwdrivers is the main reason for the popularity of these units, both in everyday life and in large construction, but all users of these units have a lot of difficulties when it comes to recharging the batteries that are supplied with most models of screwdrivers. 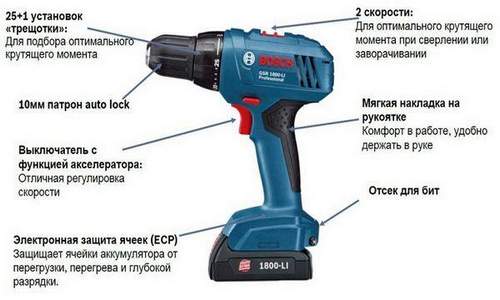 Scheme of the structure of the screwdriver.

The thing is that with improper charging, the so-called "memory effect" appears, that is, under certain conditions, the charge capacity may decrease, and in the future the unit will be discharged less fully. Typically, this effect occurs when a person tries to recharge an incompletely discharged screwdriver battery. Proper charging of screwdriver batteries has a lot of subtleties, so it is very important to consider all aspects of this matter so that the screwdriver retains its functionality and performance for a long time.

The main types of battery screwdrivers

Manufacturers of screwdrivers use different batteries in the manufacture of their units, which have their own characteristics of work and, accordingly, charging. In order for the screwdriver to work without failures for a long time, it is very important to carefully read the instructions that are attached to it. It is worth noting that different screwdrivers differ in many parameters, including price, quality and power, so all screwdrivers are divided into semi-professional and professional. Accordingly, the batteries that are installed by the manufacturer also vary in price, quality and, most importantly, charge capacity.

In professional models, which are more expensive, as a rule, batteries with a higher capacity are installed, so they can work without recharging for a significantly longer period of time. Most professional builders have a spare, pre-charged battery for continuous operation, but if the screwdriver is designed to perform simple housework, it is not necessary to have a second battery, although in some cases an additional screwdriver battery is included with the unit. There are 3 main types of batteries that are most often used in screwdrivers:

The most widely used currently are nickel-cadmium batteries for screwdrivers. This type is distinguished by a fairly compact size, relatively low cost and high charge capacity. The most important drawback of these batteries is the same “memory effect”, but with proper use and recharging, batteries of this type can be recharged more than 1000 times, although it should be noted that even with proper use, the charge capacity will gradually decrease until it reaches a minimum. Among other things, it should be noted that such a battery contains highly toxic substances, so their production significantly harm the environment, which has led to their ban in many countries.

Nickel-metal hydride batteries are in second place in frequency of use. Batteries of this type belong to the new generation, as they are completely safe for the environment. This type has a lot of advantages, the main of which is the lack of a “memory effect". However, it is worth noting that they have a high self-charging current, and these batteries should be stored exclusively in a charged form, and if you do not use a screwdriver for a month, you must necessarily discharge the device and recharge it.

Video: How Much Time Do I Need to Charge a Screwdriver Battery

Lithium-ion batteries are a relatively new product on the market for these products. They do not have a “memory effect", so they do not require adherence to charge cycles to restore charge capacity. To fully recharge these batteries requires a very small amount of time, and the capacity of these funds is quite high. However, these batteries also have disadvantages, including a decrease in performance in the cold and a rather high cost.

Charger circuit for a screwdriver.

A very important point is the first charge of the screwdriver, since it depends on it whether the full charge capacity will be activated. Each type of battery has its own characteristics of primary recharging. The greatest difficulty is charging nickel-cadmium options. Their first charge should be three times so that the entire charge capacity is full. Thus, after the purchase, the unit must be fully charged, then turned on and left to work until it is completely discharged, then you need to put it in charge again and discharge again, and so on 3 times.

See also  How much oil is needed in a chainsaw

Table of characteristics of screwdrivers.

Lithium-ion batteries are more modern, so there are no special requirements for their recharging, since in any case their capacity does not decrease.

During the first and subsequent recharges, it must be taken into account that the most optimal recharging effect can be achieved only if this process takes place at a temperature of 10 to 30 ° C. Among other things, it should be noted that when charging, some types of batteries can begin to heat up, which can negatively affect the entire battery. Do not allow the entire battery to overheat above 50 ° C. After work, it is best to store the battery separately from the screwdriver, although this is not necessary.

How long does it take to charge screwdrivers?

The composition of the battery.

Important issues regarding charging the batteries of a screwdriver include the time required to fully charge the battery. Many people think that charging a screwdriver’s battery is worth it until it heats up, but in fact this is the right way to reduce the charge capacity and performance of the entire unit. It should be said right away that there are currently hundreds of types of screwdrivers and no less batteries, so it’s very important to familiarize yourself with the instructions that come with the specific unit, because in one case 30 minutes will be enough to charge, while in the other case for a full Charging will take more than 2 hours.

Many types of batteries have an indication system, that is, on the top instrument panel there are 2 LEDs, usually red and green. These LEDs allow you to pinpoint when charging is complete. However, even if there is an indicator, it is necessary to disconnect the batteries from the mains in time, since a long stay in the connected state after recharging can cause damage to the battery.

In addition, considering the charging duration, it should be immediately noted that there are 2 main types of chargers, and it depends on what type is supplied with the screwdriver in how much the charging process takes.

Chargers are divided into pulse and conventional.

If the use of the tool is not planned in the near future, the question immediately arises: do I need to recharge it before moving it to storage? In this case, much depends on the type of battery. Common nickel-cadmium batteries should be recharged first. It should be noted right away that if the tool will not be used for a long time, then before you start using it, you will need to make at least 3 cycles of discharging and recharging the battery in order to restore its charge capacity.

Nickel-metal hydride units should also be recharged before sending the instrument for storage, and if the period of non-use of the instrument exceeds 1 month, it is worth putting the unit to recharge for about a day before use. This will restore the charge capacity. Lithium-ion batteries are considered the most convenient in this regard, since they do not need to be charged before storage.