How Reverse Works On Drills

Electric motor. The collector motor of the drill contains three main elements. stator, anchor and carbon brushes. The stator is made of electrical steel of high magnetic permeability. It has a cylindrical shape and grooves for laying stator windings. There are two stator windings and they are located opposite each other. The stator is rigidly mounted in the drill body.

The rotor is a shaft onto which a core of electrical steel is pressed. Along the entire length of the core grooves, through an equal distance, are laid for laying anchor windings. The windings are wound with a solid wire with bends for attachment to the collector plates. Thus, an anchor is formed, divided into segments. The collector is located on the shaft end and is rigidly mounted on it. During operation, the rotor rotates inside the stator on bearings located at the beginning and end of the shaft.

Spring-loaded brushes move along the plates during operation. By the way, when the drill is being repaired, special attention should be paid to them. Brushes are pressed from graphite, have the form of a parallelepiped with mounted flexible electrodes.

Speed ​​control. The rotations of the drill are regulated by a triac controller located in the power button. It should be noted a simple adjustment scheme and a small number of parts. This controller is assembled in a button housing on a PCB substrate using microfilm technology. The board itself has a miniature size, which allowed it to be placed in the trigger housing. Key moment. it’s that in the drill controller (in the triac), the circuit breaks and closes in milliseconds. And the regulator does not change the voltage that comes from the outlet (however, the rms voltage value changes, which is shown by all voltmeters measuring ac voltage) precisely, there is a pulse-phase control. If the button is pressed lightly, then the time when the circuit is closed is the smallest. As you press, the time when the circuit is closed increases. When the button is pressed to the limit, the time when the circuit is closed is maximum or the circuit does not open at all.

See also  How to Check the Rotor And Stator Drills

scientifically, it looks as follows. The principle of operation of the regulator is based on a change in the moment (phase) of the triac switching on (circuit closure) regarding the transition of the mains voltage through zero (the beginning of the positive or negative half-wave of the supply voltage).

To make it easier to understand the operation of the regulator, we will build three time diagrams of voltages: mains, at the control electrode of the triac and at the load. After turning on the drill, an alternating voltage is applied to the input of the regulator (upper diagram). At the same time, a sinusoidal voltage (middle diagram) is applied to the control electrode of the triac. At the moment when its value exceeds the turn-on voltage of the triac, the triac will open (the circuit will close) and the mains current will flow through the load. After the value of the control voltage becomes lower than the threshold, the triac remains open due to the fact that the load current exceeds the holding current. At the moment when the voltage at the input of the regulator changes its polarity, the triac closes. The process is then repeated. Thus, the voltage at the load will have the form as in the lower diagram.

Видео: How Reverse Works On Drills

The wiring diagram, and in particular the wiring diagram of the drill button, may differ in different models. The simplest scheme, and best demonstrating the principle of operation, is as follows. One reason from the power cord is connected to the speed controller.

In order not to get confused, it is important to understand that the speed control and reverse control device. these are two different parts that often have different cases. 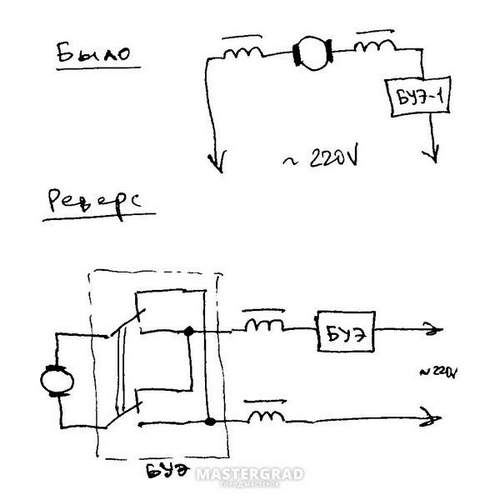 In the reverse device, such a switchover occurs, therefore, the rotor brushes are connected to the stator windings through it. There may be a circuit on this device showing which wires are connected internally.

The design of the electric drill speed controller provides for connecting a capacitor and connecting to the controller both wires coming from the outlet. The diagram in the figure below, for better understanding, is slightly simplified: there is no reverse device, the stator windings to which the wires from the regulator are connected are not yet shown (see diagrams above).

In the case of the described electric drill, only the two lower contacts are used: the leftmost and the rightmost. There is no capacitor, and the second wire of the power cord is connected directly to the stator winding.

Gearbox. The drill gearbox is designed to reduce drill revolutions and increase torque. A more common gearbox with a single gear. Drills are also found with several gears, for example, two, while the mechanism itself is somewhat reminiscent of a car’s gearbox.

Impact drill. Some drills have a shock mode for chiselling holes in concrete walls. For this, a wavy gear is placed on the side of the large gear. "washer", and the same "washer" opposite.

When drilling with the impact mode on, when the drill rests, for example, on a concrete wall, wavy "washers" touch and, due to their waviness, imitate blows. "Washers" eventually erased, and require replacement.