How to Assemble a Makita Screwdriver Properly

Operating a Makita screwdriver inevitably leads to wear on some parts of the mechanism. And in order to continue to use the tool effectively, it will take some repairs. The procedure for disassembling and repairing such equipment is presented below.

The Makita screwdriver is a fairly simple design, which consists of several main parts:

In some models, additional devices may be added, however, the main components remain unchanged. 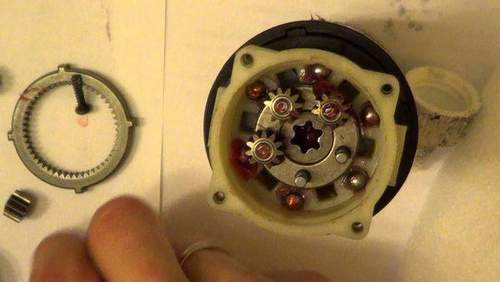 Inside, the Makita screwdriver device is quite simple. From the connection point of the battery, the wires go to the speed switch, as well as the start button itself, from which the contacts to the engine go. The front part of the engine is inserted into the gearbox, which consists of a whole set of gears of different configurations. The composition of the kit depends on the number of speeds or operating modes of the screwdriver. Modes are switched using a special controller that is brought out.

In the gear reducer, gears with external teeth work in close connection with the housing itself, in which the teeth are located inside. And if in some parts the teeth are made of metal, then the plastic case itself includes plastic teeth. It is not surprising that such a structure wears out and fails over time.

How to disassemble a Makita screwdriver

In order to disassemble a Makita screwdriver, you must first disconnect the battery. Then, all the screws that hold the two halves together are loosened in the tool body. After that, the case is removed, and in front of the master, all external components are opened: the engine, gearbox and switch. It is also worth noting that in such models special plates are often installed that are responsible for switching modes. With not very careful disassembly, a small plate can simply not be noticed. After disassembly, you can immediately proceed to repair the corresponding part.

How to repair a Makita screwdriver

One of the most common problems with a Makita screwdriver is problems with first-speed operation. At the same time, at the second speed, everything functions perfectly. This problem is associated with a malfunction of the gearbox of the tool, which does not allow efficient use of the first speed. Consider how to get rid of this problem and repair a screwdriver.

The first step is to disassemble the tool itself and separate the gearbox. Now it is important to remove all unnecessary details at this stage. To do this, simply pour out all the gears from the gearbox. It is worth noting that if there is no information about the exact location of each part, it is better to disassemble it sequentially and accurately.

Record and mark the location of the gears. This is necessary for high-quality assembly of the gearbox after repairs. You can also take advantage of tutorial videos or articles.

Screwing in instead of teeth

After all the gears are removed from the gearbox, the inside of the device will open to the eye. Given the specifics of the problem, most likely the master will see that all the plastic teeth on the inside were turned off. This occurs with prolonged use of the device, or with a gross violation of the rules of use. Plastic teeth are quite soft, so that under the influence of temperatures and constant mechanical stress, they simply grind. This leads to the fact that there is nothing to catch on the main gear and it starts to scroll.

To repair and restore efficiency, it is necessary to restore the teeth. In this case, there is no need to restore all the teeth, but just install two iron.

Video: How to Assemble a Makita Screwdriver Properly

To achieve the desired need a drill, small bolts and a drill. It is advisable to use a drill with diamond spraying, as it will effectively drain off the extra part of the bolt in a relatively short time.

The bolts are machined laterally and, if necessary, shortened in length. It is necessary to give the bolts the shape of a real tooth and provide for the installation of the crown without interference.

Important! It is not recommended to overheat a bolt during operation with a drill. Otherwise, it may become very hot and melt the surrounding plastic. The gear housing is deformed, which will lead to more serious problems. So during work you need to take breaks. To allow the bolt to cool.

Once the teeth are ready, the gear ring can be inserted back. If everything is done correctly, then it will be inserted without any interference. Two teeth are usually enough to restore the gearbox to working, so screwing in more bolts is not logical.

How to repair a screwdriver battery

Battery powered screwdrivers are also very susceptible to battery wear. This occurs over time, even when used correctly. If you do not follow the rules of operation, the battery will cease to hold a charge very quickly. And in this situation, there are two ways: to purchase a new battery or try to repair the battery of a Makita screwdriver with your own hands.

INThe second option will require a certain amount of time and effort, and the presence of special elements is also required.

A screwdriver battery is a set of a number of special nutritional cans that are soldered to the charging controller and make up an integral structure.

Appropriate nutrients can be found in power banks or laptops. There are also such banks in some numbers. In laptops, 6 cans are usually used, and in cans. 4. But the quantity may be different and depends on the battery capacity.

First of all, you need to disassemble the battery of a Makita screwdriver. To do this, it is disconnected from the screwdriver, and then all screws are unscrewed from it. The battery case opens and you can see the design of the element itself. There will be 10 cans soldered together and soldered to the power controller.

It is necessary to disconnect the banks from the board. For this, a drill with a special nozzle is used.

Disconnecting the cans from the board

Using a drill with a disk nozzle, the banks are cut off from the board. The connections of each contact with the controller are sequentially removed, and also the elements are disconnected from the common frame.

You need to do this quite carefully so as not to damage the board itself, but hard enough to completely disconnect it.

Immediately after the frame and the board are released from the old batteries, new ones can be attached to them. Before soldering, it is recommended that you clean the surfaces on the banks and on the board itself from the remnants of the previous soldering. This will allow for better contact for the long term.

Now all new banks from other devices are placed in the appropriate places on the frame and in turn are soldered to the power controller. It is recommended to do this with a thick nozzle on a soldering iron, since a lot of solder is needed. Contact must be very reliable and have a large area of ​​contact.

After sequential assembly, it is recommended to wrap the entire structure in special paper and place it back in the housing. Then the battery is reassembled and closed with a cover, which is mounted on the screws.

Before use, the battery must be recharged at a special station to full capacity, and only then connect it to a screwdriver for inspection. If everything is done correctly, the battery will again become operational.

Replacement cans can be obtained from other batteries or purchased separately. The cost for them is pretty decent, but still manual replacement will cost much cheaper than buying a new battery.

How to assemble a Makita screwdriver

The Makita screwdriver must be assembled in the reverse order. A gearbox, an engine, a switch and a mode change plate are installed in one half of the case. After fixing all the elements, it is necessary to install the top cover and tighten all the screws. After all these manipulations, you can connect the battery to the tool and continue to work.