How to Chamfer a Pipe Angle Grinder

If you decide to start replacing water pipes in your apartment, then it will not be out of place to know how to properly thread a pipe, in order to then screw a water tap or coupling onto it. The quality of the repair in your apartment will depend on how the thread is correctly cut on the pipe, since incorrectly cutting the thread or entrusting the work to the unfortunate craftsmen, there is a big risk of flooding your apartment, as well as the neighbors living below.

Threads on pipes are cut using dies or screw dies. I would divide the cutting of external thread into a pipe into two components: this is thread cutting on a pipe, which can be clamped in a vice and, after cutting, set and tighten into place. For example, in this way you can cut the thread on the desired pipe segment or to produce non-standard squeegee. The second way. This is threading the pipe in place, that is, there is no way to remove the pipe and cut in comfortable conditions. For example, you should cut the threads at the outlet from the riser. Consider both options. They have common features, but there are some nuances.

In the first embodiment, first of all, the pipe is fixed in a vice (it is possible in a clamp). The pipe itself should protrude from the clamping device to the minimum length to provide the necessary rigidity when threading. If the pipe is short, then it is possible to chamfer on an emery or if it is not available with a file. Next, the cut place is lubricated with machine oil. The desired die is bolted into a special device called a knob.

Then they start threading by turning the knob clockwise. Turn the half-turn knob forward, ¼. back. The most difficult is always the initial phase of threading. It is required to press the die with an effort until it makes 2-3 turns on the pipe. If a chamfer is made on the pipe, then the insert of the die will go easier. You can not chamfer, but make it easier. round off the end face of the workpiece with a hammer.

So, how to cut the thread on the pipe figured out, now consider another option, when there is no way to remove the pipe and clamp it in a vice. 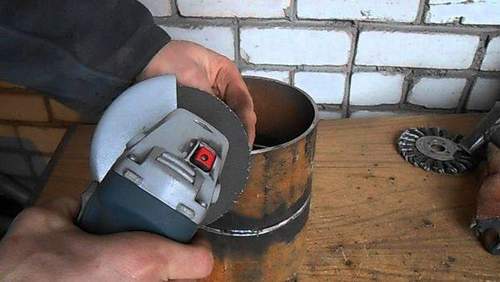 For example, you need to cut a thread on a pipe to a pipe in an apartment, a riser of cold, hot water or heating. Having cut the pipe with an angle grinder, make sure that the pipe is in good condition. If you cut a thread on a rotten pipe, you can break it. After the pipe has been cut to size, remove the chamfer, you can do this with an angle grinder, you can use a file. If the old paint remains on the pipe, you can also slightly clean the place for the thread. Lubricate the thread area with engine oil. Fasten the die into the ram holder and then pressing it firmly against the pipe with your hand, start turning the tool clockwise.

See also  Why Brushes Are Quickly Erased On An Angle Grinder

Video: How to Chamfer a Pipe Angle Grinder

Make sure that the die runs smoothly, without distortions. Having made one or two turns, you will feel how it became more difficult to rotate, scroll back half a turn, thanks to this, the chips will break off. it will be easier to chop further. Cut at least five turns of thread or 15 mm. Be sure to cut the full thread, as over time the beginning of the thread bends and if a little thread is cut, the crane may come off and the apartment will flood.

If you cut the thread on the pipe with a ratchet screwdriver, it will be easier here. The klupps have a guide in front, which is inserted on the pipe segment, set the dog in a position in which the klopp will rotate clockwise and pressing the base of the klopp begin to move the handle by cutting the thread. Having cut the thread, it is necessary to unscrew the screw die from the cut thread. To do this, switch the dog in the opposite direction and unscrew the screwdriver.

A great advantage of the ratchet screw die from an ordinary die is the possibility of cutting the thread on the pipe without completely turning the screw die around the pipe, making it convenient to use for large volumes of repair work or when it is necessary to cut threads on a large diameter pipe, for example Ø 25 mm, Ø 32 mm or even Ø 40 mm.

See also  How to cut a skirting board at an angle

There is also a small nuance: if you cut a thread on a pipe extending from the riser, and it is far from in the best condition, I recommend that you act together with an assistant: one person holds a gas wrench (2nd number) by the pipe near the riser, the key is clamped from below in the opposite direction to the die or kloppu, the other cuts the thread carefully and slowly. If you act carelessly and do not pinch the pipe, then there is a risk of breaking the pipe at the riser, and this is an extra headache. I knew several unfortunate plumbers who just happened. And in this case, the problem can be eliminated only by gas welding.

In this way, you can cut the thread on the pipe with your own hands. We hope you find this article useful.