How to Correctly Trimmer Carburetor

On trimmers, in addition to electric motors, gasoline internal combustion engines are installed. This mechanism requires special attention, because if configured incorrectly, it will either refuse to work or will work intermittently and loss of power. Basically, adjusting the engine is to adjust the fuel supply, and this is done using the trimmer carburetor.

How is the gas trimmer carburetor arranged and working

All varieties of carburetors produced by manufacturers of gas trimmers are almost impossible to cover. But, since the design of this module, as well as its principle of operation, is largely similar between different models, a generalized description of the processes occurring in the carburetor can be made. This information will allow the user to understand the principles of operation of the device, eliminate the problems that have arisen and operate it correctly.

The basis of the carburetor trimmer is solid aluminum housing. Below is a diagram of this unit. 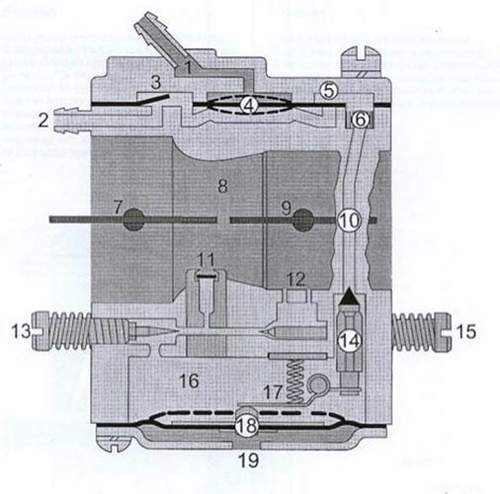 At the bottom of it, there is a diffuser, which is also called venturi nozzle (eighteen). Air is sucked in by the motor through this nozzle.

The smaller the hole, the faster the air flows, and the higher the level of rarefaction in the zone with the smallest diameter.

At the top of the diffuser are fuel channels (11.12). Through these channels, the flow of air draws in gasoline. The fuel pump itself, the jets, and the system used to regulate the flow of the fuel-air mixture can be built-in or installed externally.

Throttle (9) adjusts the amount of air drawn into the carburetor. Its amount affects the power that the engine develops. The damper (7) is used for cold start. It must be closed if you intend to start the unit. After the engine starts, it needs to be opened, otherwise, the motor will immediately stall.

Pulse channel (1) connects the impulse chamber of the pump to the crankcase, namely, to its internal volume. The piston located in the cylinder, making a reciprocating motion, successively changes the pressure in the crankcase (vacuum or pressure increase). Pressure drops make the membrane move (4). Therefore, the operation of the pump is synchronized with the operation of the engine.

It is precisely with the participation of gasoline leaking from the tank membranes (4). Gasoline enters the carburetor through the fitting (2). Further, its path lies through the inlet valve (3), the exhaust valve (5), through the strainer (6), the fuel channel (10), passes by the needle (14) and fills the chamber (16) having a control membrane (18).

The device operates as follows.

READ  What Oil To Pour Into Gas For Trimmer

Further, when the motor is running, all of the above processes are repeated. To adjust the amount of fuel entering the diffuser through the nozzles, a screw (13) is used. A screw (15) is also used to adjust the idle speed. When the regulators are twisted, the fuel mixture is enriched, and when twisted, the mixture becomes lean. Also, on some carburetor models, you can adjust the engine idle quantity regulator. It is usually located outside and, when twisted, rests on a lever fixed to the axis of the throttle.

Thus, using 3 adjusting screws, it is possible to achieve maximum engine performance, as well as to configure its uninterrupted operation at any ambient temperature, and even in mountainous areas.

Damage to the trimmer carburetor occurs due to the use of poor quality gasoline, a damaged air filter and the accumulation of dirt in the chamber of this unit. Most often, it is quite possible to repair a carburetor with your own hands. The following are typical malfunctions of the carburetor of the brushcutter.

A common malfunction that chases the fuel pump is pump membrane deformation. For this reason, it does not fit properly and the pump channels are not sealed.

The causes of membrane deformation can be as follows:

As a result, damage to the membrane reduces the performance of the pump, and as a result:

Also, the aforementioned consequences for the engine may cause clogging of the pump cavity with impulse side. In this case, dirt enters the membrane through the pulse channel.

To eliminate clogging, you will have to disassemble the carburetor and clean the membrane.

Video: How to Correctly Trimmer Carburetor

The strainer may become contaminated when contaminated fuel enters through a fuel hose or defective suction head. In the photo below you can see what a clean filter looks like and dirty (the parts are separated by a dash).

READ  How to Wrap Fishing Line On Trimmer Reel With Your Hands Properly: We Describe the Essence

A thorough cleaning and rinsing of the strainer will be required to resolve the malfunction. Also recommended blow with compressed air all openings in the trimmer carburetor body.

This failure occurs when the contact surface of the lever wears out.

The contact surface is erased due to the presence in gasoline abrasive particles or due to strong vibration of the motor during operation. This defect of the adjusting lever causes problems with the inlet, as well as improper engine idling.

The intake needle fails, usually due to the presence of abrasive particles in the fuel fluid.

Jamming the inlet needle may cause the presence of dirt in the fuel, or a long simple machine without work.

If dirt accumulates in the control cavity, the inlet needle cannot close the hole tightly and a lot of fuel is poured into the chamber.

It causes re-enrichment of fuel, and the engine starts to malfunction. It is necessary to disassemble the carburetor and clean the cavity of the adjusting membrane.

The membrane can undergo deformation during prolonged operation of the unit and when using aggressive fuel.

The impossibility of normal adjustment due to a defect leads to:

This problem may occur if the adjusting lever is not installed correctly or bent before installation. As a result, the contact surface takes the wrong position, which disrupts the additional fuel supply.

Throttle and air dampers mostly wear out due to the presence of abrasive particles in the air. Defective flaps look like they were sandblasted.

As a result of wear of the dampers, engine performance decreases, malfunctions appear in its operation, piston rings, piston and cylinder cover wear out.

The air and throttle shaft may wear out for the following reasons:

Due to hit poorly cleaned air, The shaft wears out and may break. Broken parts of the shaft can enter the combustion chamber or engine crankcase and cause serious damage to the entire piston system.

To eliminate problems with air purification, it is necessary to replace the defective filter or rinse the existing one (serviceable). The filter must be washed in soapy water and dried.

Carburetor adjustment is necessary in the following cases:

READ  Spark Plugs For Trimmer How to Choose

Before setting up the trimmer carburetor, do the following:

Also necessary set cord suitable diameter in the trimmer coil or install knives. this is done so that in the process of tuning the engine has at least some kind of load. After installing the cutting tool and starting the gasoline engine, let it warm up for 10 minutes.

If at idle You noticed that the cutting tool rotates, therefore, it is necessary to reduce the engine speed. This is done using the lower idle control, often marked with the letter “T”. The figure below shows the placement of the knobs on the Husqvarna trimmer.

But, for example, on a Stihl trimmer, this screw may be labeled “LA”.

So, turn the idle speed control to the left, until the trimmer head stops completely.

To adjust the carburetor, 3 regulators (screws) are used.

Important! If you allow the engine to work at full speed for more than 10 seconds, then it can fail.

After carrying out the above steps, the carburetor setting can be considered completed. After proper adjustment, the engine should confidently gain speed, a little four at maximum speed, and when idling, the cutting tool should not turn. This manual is suitable for adjusting carburetors on the Huter, Patriot, and others.

Also exist screwless carburetors, responsible for the enrichment of the combustible mixture at low speeds. That is, they have only 2 adjusting screws: the idle speed regulator and the fuel mixture quality regulator at high speeds. You can learn how to tune this type of carburetor from this video.