How to Cut a Wide Ceiling Plinth 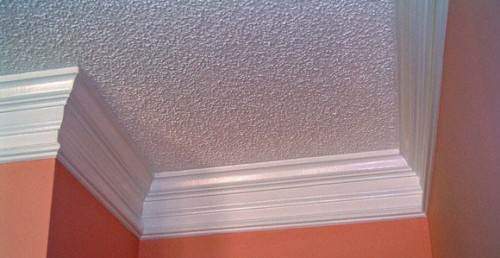 How to cut corners of a ceiling plinth. Photo 1

Probably, everyone who at least once carried out repair work with their own hands was faced with the problem of cutting out the external and internal corners of the ceiling plinth. The baseboard is ceiling, it is also called fillet, is used in the repair to hide the uneven border between the wall and the ceiling and give the interior completeness. How to cut the corner of a ceiling plinth without a miter box? We will talk about this in our article.

Today, the fillet market has various sizes, shapes and colors, with and without relief patterns. The material from which they are made is also different. These are mainly: polyurethane, polystyrene foam, polystyrene and polyvinyl chloride. But recently, the most popular in the repair work has become a wooden ceiling plinth. Its aesthetic appearance allows you to add elegance and rigor to the design of the room.

Which baseboard is better?

Before you correctly cut the corners on the ceiling plinth, you need to choose it correctly.

Tip: the ceiling skirting will look harmonious if its width is chosen correctly. The higher the walls, the wider the baseboard should be.

READ  How to cut a ceiling plinth under 45

Polyurethane fillets are the most durable, moisture resistant and flexible. and it’s not very easy to cut the corner of such a ceiling baseboard. However, all these positive qualities are “covered” by one significant drawback. they cannot withstand sudden changes in temperature, which does not allow them to be used in all rooms.

For example, in a kitchen where there is a gas or electric stove, polyurethane fillets will retain their original appearance for about a week. After that, with frequent cooking, when the hot air rises to the ceiling, then falls, they will begin to deform, spoiling the whole "picture".

Skirting boards made from other materials also have their drawbacks.

For example, products made of polyvinyl chloride have increased electrostaticity and if dents appear on their surface during operation, it will be impossible to eliminate them. At the slightest mechanical impact, ceiling skirting boards made of expanded polystyrene and polystyrene break.

If we talk about which ceiling skirting for stretch or conventional ceilings is better, then the exact answer here, probably, will not be possible. Since each of them has its positive and negative qualities. Therefore, you still have to make a choice, starting from the financial resources that you have, and from under what conditions the fillet will be operated.

Video: How to Cut a Wide Ceiling Plinth

How to cut corners without a miter box?

At first glance it seems that it is not difficult to cut off the corner of the ceiling plinth. I cut the edges of the skirting boards at an angle of 45 degrees and glued it. However, this is completely wrong. Each corner of the room can differ in its parameters, for example, one 90 degrees, another 88 or 92.

READ  How To Cut The Corners Of The Ceiling Plinth

This difference is the norm, especially in buildings that are over 30 years old. Therefore, if you simply cut the skirting board at an angle of 45 degrees and glue it on the border between the ceiling and the wall, a gap may form, which should not be. How to join a ceiling plinth so that there are no gaps? So, let’s begin.

First you need to prepare a tool that will trim the edges of the skirting boards. This can be a metal saw or a regular sharp knife.

How to cut the inner corner of the ceiling plinth without a miter box? The answer lies on the surface.

Step 1. Take the baseboard and attach it to the corner in the same way as you glue it. With a pencil draw a line on the ceiling along the baseboard. Remove the fillet.

Step 2. Attach the second baseboard on the other side of the corner to the point of contact with the first. Follow the same procedure as with the first. As a result, you should get markup.

READ  How to cut a skirting board without a miter box

How to cut a ceiling plinth. Photo 3

Step 3. Take the baseboard, lean it firmly against the place you are going to glue, and transfer to it the point of contact of two straight lines drawn earlier on the ceiling. From this point, draw a line to the opposite edge of the baseboard. This fishing line will be the place of cut.

Step 4. Repeat the same procedure with the second baseboard.

Step 5. Cut the edges of the skirting boards along the intended line.

Step 6. Attach the cut-off skirting boards to the corner. If the place of their junction does not have gaps, you can proceed to gluing the fillet. If there are crevices or irregularities, correct the cut corners with a knife.

Whatever ceiling you stick on the baseboard, be it the ceiling in the bedroom or kitchen, do not rush, carefully measure everything. This will help you avoid material damage.