How to Cut Ceiling Skirting Using a Miter Box

When planning the installation of ceiling skirting boards in the premises of their apartment, many think about how difficult the work can be. However, everything is not so scary: you can install the ceiling plinth with your own hands. the main thing is to know about some of the features of the materials from which this decoration element is made.

Different materials and their features 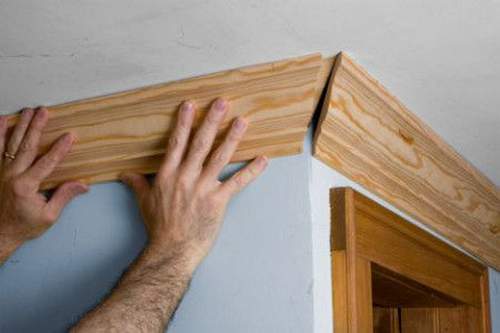 Styrofoam. Perhaps this material is the most fragile. it is unstable to mechanical damage, scratches and even mild impacts. Of the advantages. light weight, the ability to dye in various colors and ease of processing (it can be cut with a stationery knife. though very carefully).

Both polystyrene foam and polystyrene foam have one significant advantage: the softness of the material allows the baseboard to be pressed as tightly as possible to the corners and to each other, as a result of which there are no gaps. In addition, modern polystyrene skirting boards are made in such a way that they have a small recess. especially for concealed wiring.

See also  How To Disassemble A Rotary Mower

Useful. Polyurethane stucco molding can transform the appearance of a standard apartment into an elegant stylish interior.

Miter box. a tool for cutting corners of the plinth

There are two ways to cut corners. using a tool (miter box) and without it. We will consider both methods.

Miter box. a carpenter’s tool, which is a small rectangular tray (it can be made independently of wood or made ready of plastic or metal), in the walls of which there are grooves. The grooves guide the hacksaw blade at a certain angle to the axis of the tray.

Important: the angle of cutting of the edge of the plinth is always oblique and is equal to 45 ° when processing elements designed to be installed end-to-end in the corners of the ceiling. An oblique cut provides a tighter fit to the fillets.

Making a miter box with your own hands

Unfortunately, not everyone at home has the entire arsenal of carpentry tools, however, the likeness of a miter box can be made independently. To do this, a rectangular tray is made of planks, then grooves are cut in the walls. at an angle of 45 °.

To measure the angle, you can use 2 downed boards and a protractor or a regular rectangular triangle. that’s a miter box and you’re done!

Method 1. trimming the edge of the skirting board using a miter box

It is worth noting that the ceiling angles can be both internal and external, and the difference between them is in the methods of joining and different angles of cuts. The first are at the joints of two walls and the ceiling, the second. in the design of ledges, columns, outer edges of niches, pilasters, etc.

Видео: How to Cut Ceiling Skirting Using a Miter Box

The angle of inclination of the groove in the miter box can be equal to 45 °, and 60 °, and 90 °. Professional carpenters acquire a miter box with a rotary mechanism. in this it is very convenient to rotate the cutting tool when cutting the skirting board.

Important! To cut the "inner" corner of the fillet, you should put the upper part on the bottom of the miter box. the one that will stick to the ceiling. In this case, the lower part of the strap should be pressed firmly against the wall of the tray.

Step 1: correct measurement of the length of the skirting board according to its marking on the wall, drawing a "notch" with a pencil on the material for the future cut.

Step 3: after the baseboard is installed and tightly fixed in the miter box (you can simply press the material firmly with one hand), a hacksaw is set in the groove under 45 °. Now the material can be cut. The edges of the second skirting board, which will be installed adjacent to the first, are cut in the same way, only as if in mirror image (the skirting board is installed in the opposite direction, the edges are cut at an angle of 45 ° as well).

Important: when trimming the edges of fillets, you need jewelry accuracy. otherwise the material will be damaged, and the appearance of the skirting boards at the joints of the walls, too. If polystyrene baseboards are used, then the edges can be cut with an ordinary sharp knife without a miter box. However, it should be remembered that cutting corners should be done on the front side.

The difference between slicing the “outer” corner from the “inner” is that the skirting boards should protrude slightly from the edge of the wall. for the so-called overlap.

Repeat steps 1, 2, 3 in the same way as cutting “internal” angles. However, it should be remembered that the upper part of the plinth (one of the edges) should have a small allowance. The second (adjacent) plate is cut off in the same way, only mirror to the first.

Cutting off the edges of a wooden ceiling plinth is easier (and better) than a hacksaw for metal. with small frequent teeth. Then the slices will be more accurate and even. And the foam is well cut with an ordinary sharp knife (or a construction one). but the blade must be well honed, otherwise the material will crumble when cutting.

If the cutting was accurate and accurate, then two adjacent strips will ideally coincide with each other by the edges. If on the edges there are bumps or roughnesses. they can be cut with a sharp knife for a more snug fit.

Method 2. trimming the edge of the plinth without the help of a miter box

If you do not want to spend time making the miter box, you can do the marking directly on the ceiling! To do this, the edge of the plinth is cut off at a right angle, then the bar is applied to the corner as it is planned to be installed, and the border of the plinth is marked.

See also  How to Disassemble a Makita Hr2470 Hammer Video

Do the same with the second bar.

After spacing the lines, the point of intersection of the two lines is marked directly on the planks. this will be the fishing line of the cut of the edges of adjacent skirtings.

Method 3. trimming the edge of the skirting board using the "template"

If there is no desire to tinker with making a miter box, or you put plinths “forever” (that is, a miter box will never be useful to you anywhere else), then you can make a regular template from thick cardboard. Especially this method is suitable for those with uneven walls and butt angles (for example, the angle of the joints of the walls is not rectangular).

Cardboard is needed for measuring and marking the cut lines on the baseboard (as a guide).

Step 1. Connect the two planks at right angles, fix them with nails.

Step 2 Install the baseboard in this “tray” in the same way as if it was installed on the ceiling, put the “tray” itself on the edge of the cardboard template.

Step 3 Guided by the marking, cut off the edge of the plinth. In the same way, cut the other fillet and set both levels butt.

Important: when cutting the edges, the knife (hacksaw) should be kept strictly upright!

For very lazy manufacturers came up with such a way as decoration of corner joints with patch corners. At the same time, it is not necessary to measure the edges of the skirting boards for a jewelry fit. just glue the trims and cover uneven joints with decorative corners of the same color as the fillets themselves.

It will not cost so cheap, but it will save a lot of time. especially if the apartment has uneven walls.

In the next article, we will tell you how to make a rack ceiling on your own in an apartment or on Bal-Kone.