How to Cut on a Circular Machine

Installation of a longitudinal emphasis. An emphasis for longitudinal sawing, running across the entire table from edge to edge, is ideal for sawing artificial wood materials. However, when sawing solid wood (solid wood), such an emphasis can lead to an accident. Just as a partially cut cut in a surface-hardened wood would have gripped the blade if it had not been for a wedging knife, such internal stresses could also spread the cut until they press the workpiece against the saw blade and wedge it or, possibly, lead to the ejection of the part. If the emphasis has front and rear adjustments, it should be moved so that its rear end extends about 25 mm beyond the front edge of the saw portion protruding above the table, providing the necessary space to the right of the blade. Or fasten a wooden block on an emphasis for ensuring such a gap. With any method of installing the stop, it should be parallel to the disk.

Set the cutting width on the stop scale, make a test cut on the unnecessary material and check the installation. If you do not trust the scale, use a ruler to measure from the stop to one of the saw teeth on the stop side. Before switching on, make sure that the stop is securely fastened.

Wide board sawing. When sawing a wide board, with one hand move the workpiece from the side of its rear part (but not in the same line with the saw blade), and with the other press the board simultaneously to the table and the stop. Feed the workpiece evenly. Use the help of an assistant when working with very wide boards, making it clear that you will direct the workpiece and adjust the feed rate.

Narrow board sawing. Finishing the longitudinal cut of a narrow board, feed the workpiece with a wooden pusher. with a notch on one end and a rounded edge on the other. Use the second pusher to press the parts against the stop. Keep the pushers close to the machine so that they are always at hand when you need them.

Cross cutting with bevel stop. In the middle circular machine, the adjustable stop for bevels is relatively short, but often has drilled holes, with which you can install an additional, longer wooden stop from hardwood on the standard stop. Press the workpiece firmly against the stop with both hands and feed at a relatively low speed. If the part is too short to hold it with both hands, secure it with, for example, a clamp on the stop.

Cross cutting on a movable section. The friction between the large workpiece and the worktable can turn crosscutting with the bevel stop into very hard work. The possibility of easy, smooth cross-cutting helps to increase the accuracy and accuracy of the work results, regardless of the size and weight of the workpiece. On the movable section of the working table of the circular machine there is an emphasis longer than the average, which can be turned through an angle from 90 ° to 45 ° with respect to the saw blade. Most of the stops have an adjustable end stop necessary for the manufacture of several identical parts.

Beveling. To bevel on a circular machine, set the appropriate stop at the desired angle, then feed the workpiece in the direction of the blade in the usual manner. Make sure that the part is firmly pressed against the stop so that the saw does not move it back.

To obtain an inclined cut, tilt the saw blade.

Getting the same parts

Getting the same trim. Of course, it is very tempting to cut the workpiece, pressing it to the stop for longitudinal sawing so that the same segments are obtained to the right of the blade. However, the cut-off part may be caught between the stop and the saw blade and be thrown towards the master. The correct way is to either not slightly bring the longitudinal stop to the disk, or fix the separating block on the stop, which would play the role of an end stop for the workpiece, leaving a gap to the right of the canvas.

Video: How to Cut on a Circular Machine

Swinging washers. A pair of beveled. shaking. the washer makes the edge of the web swing during rotation from side to side and make a wider groove than a regular cut. Another way. installation of a head for grooves. It is necessary to change the standard table insert to another, with a wider slot for the saw blade.

Seam folding. Two straight longitudinal cuts result in a fold in the workpiece. Make the first cut on a narrower face of the part, leaving enough material on each side of the blade to provide sufficient support. Reset the longitudinal emphasis and the height of the blade and make a second cut, which will remove the waste part of the wood. Carry out the second cut so that the wood trim is not on the stop side, as the trim sandwiched between the stop and the blade can be ejected with force by rotating the disc at the moment of cutting the last fibers.

Groove cutting. The swinging saw allows you to cut a groove in one pass. For lack of special equipment, first make one cut on each side of the groove, then, resetting the longitudinal emphasis to the width of the blade, make alternate cuts until you select the entire groove between the two cuts.

Comb cutting. To obtain a central ridge, make two identical folds on the edge of one of the parts of the joint. Perform the first cut in a narrow face, then turn the workpiece over with the other end to cut the second side of the comb. Remove trim on both sides of the comb.

Spike execution. Some machine tool manufacturers produce cleat clamps. Alternatively, you can make a wooden template for fixing the workpiece during processing. Fasten with screws two wooden blocks of equal thickness on a plywood sheet measuring 400×200 mm. Both bars should be aligned along the long side of the plywood and leave room to place the workpiece between one of them and the edge of the plywood. Use only one screw. farthest from the saw. end of the bar. To prevent the template from swinging, glue an additional stop.

After this, partially cut off the excess wood on each side of the tenon to check that it is seated in the nest. If necessary, make corrections in the installation of the emphasis before working with subsequent workpieces.

To carry out the shoulders, fix the separation block on the longitudinal stop so that they are correctly positioned in relation to the web.

If you need to reduce the width of the spike, first cut the shoulders, and then remove the waste with volumes of one blade thickness per pass.

You can modify the template to make a slot in the bevel.

Spike connection straight open. This corner connection is used in the construction of box-type products. Its manufacture by hand. a very time-consuming process, but on a circular machine with the help of a straightforward device you can cut several of these compounds in minutes. Use a wide-cut blade or install swing washers to select the eyes (grooves between the spikes). Calculate the distance so that you get an integer number of spikes evenly spaced on both parts of the joint. 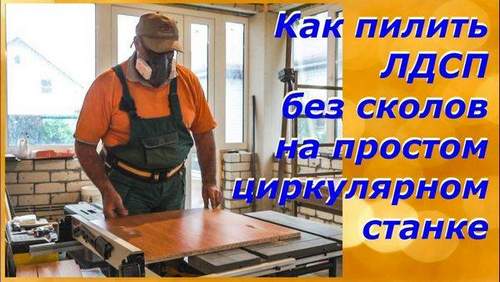 To make a template, attach a long wooden piece to the bevel stop and, set the height of the blade slightly above the thickness of the workpiece, make a cut in the template.

Plan a hardwood plank so that it fits snugly into the cut. Cut 50-75 mm from the plank and glue this piece of plank into the cut so that a short protruding spike is obtained.

Place the first part of the joint on the end and press it into the protruding spike of the template. Lock the workpiece.

Make a pass along the saw, then put the resulting cut on the spike of the template and make the next eye with a new cut.

Continue to work in this order until the entire row of spikes is completed.

The spikes on the second part of the connection must be shifted to match the eyes of the first part. Place the second part on the end face, as in the previous operation, but between it and the spike of the template, place the rest of the bar.

Then, taking out the bar, make the first cut, then put it on the spike of the template and make the next eye, repeating the procedure as many times as necessary.

On the side, put it on the glue and after it dries, flush the protruding parts of the spikes flush.