How to Cut Particleboard For Furniture

From home tools, the most suitable for cutting chipboard is a hand saw. But even when cutting chipboard with it, a number of problems arise: 1) it is very difficult to follow strictly in a straight line, the saw wags; 2) chips are formed.

Are there any solutions to these problems? There is. It is about them that we will tell today. By the way, all these tricks apply to cutting plywood. 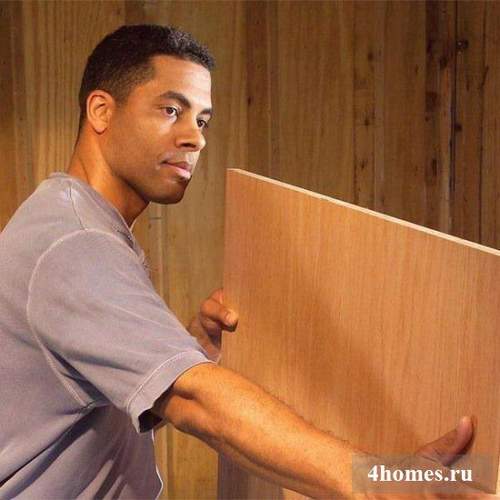 Tip 1: Unfold the chipboard on the floor with full support

Cutting with full support means that when you finish the saw to the end, the cut chipboard sheet will not fall off immediately.

If you want a very even and clear cut, chipboard is best cut on the floor. So you are 100% get a solid, stable foundation. Particleboard will not move even if you perch on top of it to complete the cut. You will also be sure that the cut piece will not fall off, will not split, and will not fall.

Place under the sheet of chipboard bars 5 × 10 cm perpendicular to the direction of the cut. The bars will have to be sacrificed, as the saw will pass through them. The more stable your chipboard sheet is, the more accurate the cut will be.

Tip 2: Adjust the depth of cut

Adjust the depth so that no more than half of the tooth of the disk protrudes beyond the lower edge of the chipboard or plywood (see photo above). It may not seem important to you, but believe me, the depth of cut significantly affects the quality of the cut. With this setting, the tooth cuts the material, but does not chop it, and the saw also stabilizes so that it vibrates less during the cutting process. Both of these factors make saw marks on a chipboard cut less noticeable.

Position the saw along the edge of the chipboard, raise the guide and look at close range to set the correct cutting depth. By the way, at the same time, it would be nice to check the saw blade for damage, because a saw with bad teeth will make a rough cut. Another point: the saw is arranged so that its course goes upward, so chips are most often formed on the surface of the chipboard, which is facing up, and the cut from the side of the surface, looking down, is cleaner. Therefore, when cutting chipboard, have a good, face down.

Видео: How to Cut Particleboard For Furniture

Tip 3: For a longitudinal cut, use a hard, long straight object as a guide

It is convenient to use a narrow long piece of chipboard with a thickness of 16 mm and a width of about 30 cm, which was professionally cut in a specialized workshop, as a guide for making an even straight cut. All that is needed is to tighten its ends with a clamp.

It is usually best for the metal base plate of the circular saw to abut against the edge of the guide so that maximum saw stability is achieved during cutting.

Tip 4: Check the guide before making a cut

Tip 5: Cut at a constant speed without stopping

The cutting speed depends on many factors, including the type of saw and the sharpness of the blade, as well as the material you are cutting. In general, a sharp disk passes through a sheet of particleboard with little resistance, as if it were melting a tree. If you feel that you have to make an effort and push the saw, it means that you are either cutting too fast or the disc is dumb. Too fast cutting tears chipboard fibers and leaves noticeable marks on the cut. Too slow can cause the drive to overheat and ignite the wood.

Then you get both marks and a burned trace on the cut. That is why it is best to cut on the floor when you make a long cut. You can crawl on your knees right on the chipboard, following the movement of the saw, you do not need to stretch or bend.

In principle, all disks from the figure above are capable of making a good cut in particleboard and plywood. As we wrote above, the more teeth, the better the cut. However, the minus of the disk with 140 teeth is that it is blunt faster than the other three types. Especially if you are cutting chipboard. Take a disc with 40 or 56 teeth. And it’s better to keep one more in reserve. A 56-tooth blade is commonly used for cutting laminate flooring.

You need to remove it carefully, pull it in a direction perpendicular to the cut (see photo below), so as not to damage the laminate coating of the chipboard.

And one last tip. If you need to cut expensive material from the front side, tape the saw platform with adhesive tape so that it does not leave scratches on the surface of the sheet.