How to Cut Skirting Boards to the Ceiling Correctly

The ceiling plinth performs not only a decorative function, visually separating the walls from the ceiling, but can also hide under itself the joints of various finishing materials of the ceiling and walls. Not every interior design involves the use of a ceiling plinth, but most often the general view of the room seems incomplete without it. There is nothing complicated in fixing this element. fillets. almost all types of skirting boards are attached to glue. But the question of how to properly trim the ceiling plinth in the corners of the premises can lead many to a standstill. Indeed, even in the simplest room there are internal corners where the planks of the ceiling plinth must be precisely and beautifully joined. And in a more complex room configuration, you will also have to dock the skirting boards, performing an external corner. In this article, we will consider various options for how to cut a ceiling plinth with and without tools at hand.

First you need to understand the question of how to cut the ceiling plinth, the answer to it depends on the material of which the fillet is made. Ceiling skirting boards made of polyvinyl chloride (PVC), polystyrene foam (polystyrene), polyurethane and wood are currently sold.

PVC Ceiling Plinth are the cheapest. Dents and creases are easily formed on them, which cannot be removed, so the product must be discarded. Also their disadvantage is electrostaticity. the ability to attract dust. You can cut them with a sharp construction knife or hacksaw.

Styrofoam skirting boards also apply to cheap. This material is very fragile, it easily crumbles during processing, so it is necessary to cut polystyrene foam with a sharp knife or a hacksaw for metal, without making too much pressure. 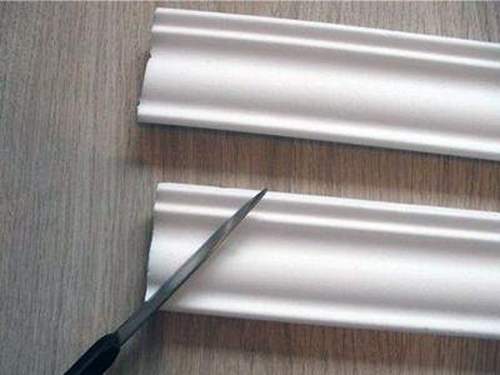 Extruded polystyrene ceiling moldings a little more expensive polystyrene foam, denser and harder to cut. Nevertheless, they crumble less, therefore it is easier and more convenient to work with them. They are cut with a construction knife and a hacksaw for metal.

Polyurethane Ceiling Skirtings are the most expensive at the moment. They are durable, elastic and moisture resistant, easily cut with a construction knife and do not crumble. The disadvantage of polyurethane skirting boards is their dependence on temperature changes. For example, over a gas stove, a polyurethane baseboard will acquire permanent deformations and begin to crack slightly. If you try to process or trim such a skirting board, it can bend or deform in another way.

Wooden ceiling skirting boards they are dense heavy products that can be cut only with a hacksaw, preferably with small frequent cloves. You can also use a sheet of metal.

Before proceeding to a list of methods of how to properly cut a ceiling skirting, I would like to note that it is possible not to cut a skirting with special accuracy. Available for sale special corner elements, into which the edges of the baseboard are inserted. In this case, it is enough to trim the baseboard strip at an angle of 90 °, and the corner element will hide all the flaws. But this method is not always used, since the dimensions of the corner elements are slightly larger than the baseboards themselves, so the corners in the room will stand out against the general background. Sometimes it can look bully. Nevertheless, if the design of the room allows the use of corner elements for ceiling plinths, it makes sense to use them. Further instructions will come in handy for those who nevertheless decided to precisely trim the skirting boards at a given angle.

The miter box is a simple carpentry tool that allows you to cut the workpiece at the required angle. Most often it is a tray made of plastic, wood or metal with vertical slots for cutting at an angle of 90 ° and 45 °. There are also more complex designs of the miter box. for cutting at angles of 90, 60 and 45 degrees. For more professional work, a miter box with a rotary mechanism is used, where the hacksaw can be fixed at any angle to the workpiece.

How to cut a ceiling plinth with a miter box. inside corner:

Video: How to Cut Skirting Boards to the Ceiling Correctly

Next, we join the trimmed plinth planks and check the accuracy of cutting. For a more accurate orientation, they also say that to complete the internal corner, it is necessary to start cutting from the front of the baseboard. After trimming, wooden skirting boards will most likely have to be adjusted with a file.

How to cut a ceiling skirting board using a miter box. outside corner:

Trimming the workpiece with the help of a miter box is only suitable if the angle between the walls is equal. 90 degrees. If the accuracy is poor, you have to use other methods.

Marking the skirting board on the ceiling also allows you to cut the corner evenly and accurately. The only drawback of this method is that it is difficult and inconvenient to keep the skirting board in weight during the cutting process. Otherwise, it is possible to outline the angle for cutting in this way even more accurately than in other ways. When applying the baseboard to the installation site, all wall flaws and deviations in the size of the corner are immediately taken into account.

Trimming the corner of the ceiling plinth:

We cut the skirting board along the planned fishing lines, join them and apply them to the installation site. Please note that using this method is more convenient to cut the inner corners.

How to trim a ceiling skirting board using a miter box

Something resembling a miter box can be done by applying the necessary cut angles to paper, cardboard or wood. It is necessary to draw two parallel lines, determine the center, and then set aside the necessary angles using a protractor. The advantage of this method is that you can put off any angle, including a greater than 90 degrees. Of course, before you cut the corners of the ceiling plinth, you must first check the angle between the walls using a corner and measure with a protractor.

The technique of cutting the ceiling of the skirting board using the drawn miter box is exactly the same as using the miter box itself. We press the plinth bar to one of the parallel lines, then set the hacksaw at the desired angle, which is already outlined, and cut it off.

Making a miter box with your own hands is also not difficult.

Method 1 You will need three wooden planks or boards that must be put together in a U-shaped box. Then, the necessary angles are marked on the walls of the box, and a hacksaw is cut. The result should be a wooden miter box, in which grooves are cut.

Method 2 The combination of an impromptu miter box and template with the intended fishing line. For the convenience of cutting, it is necessary to build something in which it will be convenient to hold the ceiling of the skirting board, since it is difficult to keep it on weight. It is enough to put together a corner from two wooden planks or boards. On paper, you need to draw lines with corners for cutting at 45 degrees or under any other. Then we apply the baseboard blank to the corner, press it with your hand, as described in the technology for using the miter box, move the piece of paper with the template under the edge where we are going to cut, and cut it off. In the process of cutting, we focus on the fishing line drawn on paper.

Method 3 As an impromptu miter box, you can use anything, everything. that we form an angle. For example, a table pushed against a wall.

It is not necessary to fix the planks of ceiling skirting boards before they cut the reciprocal plank and tried on their location. Only after two reciprocal levels ideally converge in a corner, it is possible to begin to fasten them to a ceiling. Small flaws can be modified with a file or a nail file in the case of wooden and polyurethane skirtings. To adjust the foam products will have to wield a sharp knife.

If suddenly even after fitting the skirting boards there is a small gap between them, do not despair, it can be repaired with putty. Trimming the ceiling skirting yourself is not difficult. But in order not to spoil a lot of products, it is better to pre-train on small workpieces.