How to Disassemble a Makita 2450 Hammer

"Makita 2450" It is known among builders and repairmen as a rather functional professional tool. It is simple and reliable in operation, has lightness and good balance. Thereby "Makita 2450" will last quite a long time. It has a good dust protection system, which makes the operation of the equipment durable. 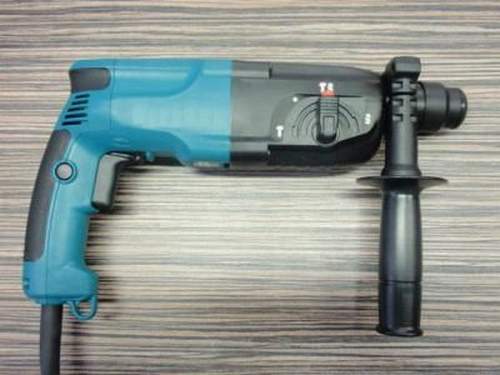 Its popularity is explained by the possibility of repairing the hammer drill. "Makita 2450" at home. You do not need to spend a lot of money on its maintenance. However, before the punch assembly process "Makita 2450" you should familiarize yourself with the technology of its disassembly and repair.

A punch has a certain set of qualities "Makita 2450". The specifications provided by the manufacturer in the instructions are as follows.

The weight of the tool is only 2.4 kg. The drill mounts are provided by the SDS system. The rotary hammer is designed for crushing, drilling and hammer drilling. He has three modes of operation. The number of idle turns is 1100 per minute, and the maximum number of strokes. 4500 per minute. The strength of the translational motion at the maximum is 2.7 J. The maximum drilling diameter:

There are also additional functions for the punch. "Makita 2450". The characteristics highlight the presence of a safety clutch, reverse, lock power button, as well as electronic speed control.

Power supply network is 780 watts. The cable length is 4 m.

Signs of a fake

Due to the great popularity of the equipment presented, cases of counterfeiting are not uncommon. There are characteristic features that determine the fake HR 2450 hammer drill. These include a short cord (about 0.5 m). The letters on the black clasps of the suitcase are matte for the fake, and for the original. brilliant.

In the photo of the punch in the instructions for this product, the background is light gray, almost white. The copy will have a dark, dull background color.

If Japan is indicated as the manufacturer on the HR 2450 case, this is not a real tool. The original says: "Made in P.R.C."i.e. "Made in China".

"Makita 2450" includes a rubberized handle on which the serial number is indicated. All details of the suitcase must also contain each designation. In a fake, the handle is not made of rubber, but of plastic. This should also be a signal of the need to refuse to purchase such a tool.

In the process of repairing the presented equipment, the user must be able to disassemble the tool. Punch assembly diagram "Makita 2450" has many nodes and elements. To carry out repairs, you should not know all of them. Here are the most basic elements that the diagram represents ("Makita 2450". the device is very complex).

READ  How to Disassemble a Makita 2440 Hammer

The first one. it is a snap ring. It is involved in the process of dismantling the cartridge cover. Next is an annular locking device. It holds the ball to fix the drill. Its guides are the washer and conical spring.

4 screws connect the gearbox to the motor. There are many rubber parts in the circuit which, when worn, become a common cause of breakage.

This knowledge is enough to carry out repairs at home. Next, you should familiarize yourself with the technique of its implementation.

The feasibility of self-repair

Rotary hammer repair "Makita 2450" do it yourself for several reasons.

Representatives of a service center troubleshoot a specific algorithm. This leads to a rather large cost of repairing the tool.

It is also likely that the company’s representatives will conduct a routine inspection, the need for which is doubtful. And you still have to pay for it.

If the unit or several of them still require replacement, the service staff will supply only licensed parts "Makita 2450". Repair in this case may be comparable in value to the purchase of a new tool. All these facts speak in favor of self-tuning or replacing equipment parts.

Видео: How to Disassemble a Makita 2450 Hammer

"Makita 2450" do it yourself with certain knowledge and skills. The technology for inspecting and replacing parts for the HR 2450 is fairly straightforward. It involves disassembling the tool, after which all old grease, dust, and dirt are removed. Damaged components are replaced with new ones. Then all the details of the punch are assembled together. It is necessary to familiarize yourself with each item of such work. They can be made in the area of ​​a cartridge, a mode switch, a perforator case.

To carry out repairs, first remove the cartridge, then the speed switch. After that, repairs are carried out inside the case. Lubricant and worn rubber elements are replaced.

The cause of the breakdown may be wear of parts. It is detected if the drill does not automatically snap in without pressing the cover. After checking all the details, they identify the cause of the breakdown. Old elements are cleaned of dirt and old grease. The ball is densely treated with new oil. The conical spring is installed with the narrow side to the resistor.

READ  How to Thread a Line into a Makita Trimmer Coil

The guide washer should press it so that it is below the hole in the barrel. Rotary hammer repair "Makita 2450" with the cartridge area requires fixing the ball in the hole. All parts are assembled in reverse order.

To disassemble, remove the T-shaped latch on the handle of the switch. Use a 2 mm screwdriver for this. It is very necessary to tighten the tabs of the latch. She is pulled out. The red lock must be held so that it does not fly out under the action of the spring.

After carrying out these steps, the switch knob should be turned to the leftmost position. So its protrusions will coincide with the grooves of the editor’s case. The switch is easily removable. The latch is pulled out with the spring. The rubber ring on the handle of the switch should be pry off with a thin screwdriver and remove it. It prevents grease from escaping from the housing.

Punch assembly diagram "Makita 2450" in the field of the switch assumes a certain sequence of conduct. All parts and the seat are cleaned of old dirt. Thoroughly grease two metal pins and a rubber ring. They put it on the switch. A spring is inserted into the handle, then a latch. It should not pop up when a latch is installed in the housing.

Then the switch is inserted into the gearbox. In this case, the handle is sent to the sector between the designation of the combined mode and impact. However, he will not be inserted until the end. The switch should be turned to the drilling mode and a little further. In this case, do not forget to press the latch button so that it does not interfere with the movement.

Then turn the switch clockwise and push the latch to the end.

In the process of getting acquainted with the question of how to assemble "Makita 2450", you should find out the frequent malfunctions of the switch. They can be caused by wear on the metal pins. In this case, one of the modes will not turn on. You will need to replace the switch. This should be done in the event of a breakdown of the landing tabs.

If the rubber ring is worn, a slight leakage of grease will occur. Will have to replace it.

It happens that the beak breaks at the latch, with which it is attached to the troughs of the gearbox. The tabs of the lock may be damaged. To avoid all of the above damage, you must carefully handle the tool.

READ  Which Is Better Punch Or Hammer Drill

To remove the housing from the gearbox, raise the tool barrel up. The punch should be pressed to the workbench, while pulling the shell up. In this position, all the details remain in place.

After their revision, inspection and replacement, the gear housing is replaced. All its elements must be located in its original form. Necessary elements need to be greased.

During assembly, the gearbox housing must be cleaned with kerosene or gasoline. Next, the shell is put on to its original place. The mode switch should not be in it.

Malfunctions in the gear housing

The case of the HR 2450 model is characterized by high strength, breakdowns in this unit are quite rare. But it happens that certain troubles happen here too. If the case got along with a needle bearing, then its seat is very worn out. When this part becomes extremely loose, the housing should be replaced.

Sometimes the seat of the intermediate shaft is broken. Repair is supposed to be similar to the first case.

The gear housing flange has an oil scraper ring. If it was damaged by construction dust (it happens extremely rarely) or careless actions of a repairman, it is changed together with the body.

The same procedure is performed in case of failure of the holes of the mode switch. The listed types of breakdowns are typical for fake specimens.

Opinions were divided among users about the tool. Among the shortcomings, overheating and leakage of the punch lubricant are noted "Makita 2450". The reviews also make it clear that repairs are carried out by a service center for a long and expensive time. However, eliminating the cause of the malfunction yourself, you can expect normal operation of the tool. Particularly often, malfunctions occur in punchers that have been released in recent years. But earlier products are known as the highest quality. This is due to the emergence of many low-quality fakes that are not made using original technology.

It is noted that this is one of the most inexpensive rotary hammers. It is lightweight but powerful. When you purchase the original and the normal handling of the user during operation, the equipment will work for a long time and productively.

Having familiarized with the characteristics, assembling and repair schemes of the punch "Makita 2450", you can extend the life of this tool. By performing maintenance and replacement of parts yourself, the user will significantly save his money. When buying, you need to pay attention to the characteristic differences of the original tool. It will last longer than fakes.