How to Make a Thorn on a Circular

How to do something yourself, with your own hands. home master site

EXCELLENT TOOL FOR MASTERS AND HANDICRAFTS AND EVERYTHING FOR GARDEN, HOUSE AND COTTAGE LITERALLY A GIFT HAS REVIEWS.

Once I needed to make a lot of boxes of different sizes from plywood. As you know, plywood does not like fastening with screws at the end and often splits from this.

I had a tenon cutter for the milling cutter, but it had low productivity, and besides, when using low-quality plywood, the cutters were quickly dull.

And the sharpening of the cutter gradually changes its diameter, and it becomes impossible to work with it on the tenon cutter. Therefore, the task was to create a new, more powerful tool with the ability to cut spikes immediately in a pack of blanks to speed up the work.

To solve this problem, I used a stationary circular saw, under which I made a special device. I make the grooves with the disk block, and the pin provides the accuracy of movement, for which there is a fixed thread pitch. I’ll tell you how I made this device.

EVERYTHING NECESSARY FOR THIS ARTICLE IS HERE >>>

1. As a basis for the device for cutting thorns, an old home-made stop for a saw came in handy.

2. On the sides of the stop, I installed vertical larch racks, which I additionally reinforced for stiffness with side plates. In racks pre-pressed bearings under the driving pin. He used a hairpin with M14 thread and a pitch of 1.75 mm.

3. The movement on the hairpin is done with the help of a wooden block in which a long nut is hidden. Using a shorter nut may cause the unit to skew during movement.

The blanks of the boxes in my design are clamped to the base board. So that it lasts longer and does not crumple from clamps, for its manufacture I used a terrace board from larch, which I leveled on a surface gage.

At first I planned to make the support a single board, but it would require a latch from below and, in addition, the lower edge would be damaged by the saw when cutting the spikes. If I raised the support board above the level of the spikes, then there would be a problem of chips on the workpieces, especially from plywood. Therefore, I made the backing board in two parts.

See also  Circular from circular saw with their own hands

4. The lower, narrower and shorter part of the support board is firmly attached to the stop of the tenoning base, and the upper part is left movable. It is moved using a wooden block with a nut and studs along the groove at the bottom of the baseboard.

5. In the lower part, I installed a replaceable splinter guard from MDF. On the moving part of the baseboard, I installed a lateral stop. strictly perpendicular to both the board and the base plate. Then he attached a block to the edge of the base as an additional fastener and made a cut of the base for the passage of the disk.

6. For safety, a protective block has been pasted in the front of the disc exit. There is a place on the sides of this bar where the handles will be installed for the convenience of moving the tenoning machine along the runners of the saw table.

7. To control the position of the disk set two pointers. The first one shows when the backing board is set to the “zero” position, that is, when the disc is firmly in contact with its plane with the side stop. The second helps to count the revolutions during the rotation of the stud. As a second counter, I used a wooden "barrel", rigidly fixed to a hairpin, on which I applied the risks in increments of 1/4 turn.

Video: How to Make a Thorn on a Circular

8. To ensure faster operation, I used a “sandwich” of two identical disks and gaskets between them. There are special kits for setting the exact width of the groove, but they are expensive, and I don’t have one. To get the gasket of the required thickness, I cut a duralumin washer with a thickness slightly less than necessary and adjusted it to the desired size using a self-adhesive aluminum tape. I want to note that it is better to use the same new discs. I had one new, and the second. already a little used, as a result, when cutting, a small step appears at the base of the spike.

See also  How to cut paper on a plotter

9. After many tests and adjustments, I got a “sandwich” with a cut width of 5.25 mm, which corresponds to 3 turns of a hairpin (1.75 mm x 3 = 5.25 mm). This made it possible to make tenon spikes 5.25 mm wide by turning the hairpin between cuts 6 full turns. If it was necessary to make larger spikes, then the number of revolutions was proportionally increased.

10. The tenon cutter is ready for use. 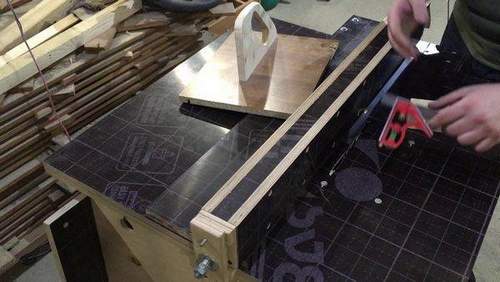 Additional refinement of the tenon cutter

At this, the production of the tenon cutter could be finished. However, after a short operation, several shortcomings were found in its operation.

Firstly, counting a large number of revolutions is not convenient. you can easily get lost. Secondly, if an incomplete rotation of the hairpin was required, then the calculation became even more complicated, and the accuracy decreased. Thirdly, since the gap between the pin and the moving support board did not allow the handle to rotate normally, it had to be pulled out to the maximum to the right, and this protruding long part of the pin made the device not very convenient.

To fix these shortcomings, I decided to install a “gear” on a stud of two gears located at right angles to each other. The size of the gears was selected so that for one revolution of the pinion gear the pin makes 3 turns. The most affordable option for me was to make gears from wood, so as a material I used birch plywood 13 mm thick.

11. I received the drawings of the gears using the gear generator Matthias Wandel, which can be found on his website. He pasted prints on plywood and cut the gears with a band saw.

12. In order for the gears to mesh well, their teeth were cut at an angle of 11 degrees. over, different sides of the tooth were cut accordingly with an inclination in different directions. My band saw allows you to tilt the table only in one direction, so I did not use the tilt of its table, but made an inclined base and fastened it with a clamp to the saw table. First, I cut the left sides of the teeth when tilted to the right, and then turned the emphasis and cut the right sides. Both cuts at the base connected with a hand jigsaw.

13. After that, each tooth was ground and drilled a central hole.

14. The gear works only with the upper parts of the teeth, so I did not carefully process their lower parts.

15. Installation of the “gearbox". First, I cut a part of the right strut with a hacksaw and tried to install a furniture nut for fastening the drive gear. However, this option was a failure. Due to the bearing installed in the rack, it was not possible to fix the nut firmly with long self-tapping screws, and the large lever of the pinion gear led to strong beats. The idea of ​​simply putting a large gear on the bolt was also bad: to make the gear rotate easily, a little play was needed, and it also caused beats.

16. I had to press the bearing into the gear, and instead of a furniture nut, put a 3 mm thick metal plate with mounts that extended beyond the bearing in the rack. To compensate for the thickness of the metal plate, a recess was made in the gear from the inside.

17. On the pinion gear set the handle and numbered the teeth for convenience (a turn on one tooth is equal to 1/4 turn of the pin). The bottom of the rack did a return to risk for accurate positioning. After that I sawed off an extra piece of the hairpin on the right and covered the structure with wax for better gliding and protection from moisture and dirt.

18. By turning the drive gear a different number of revolutions, I get spikes of different thicknesses and can even make them uneven.