How to Put a Carburetor On a Chainsaw 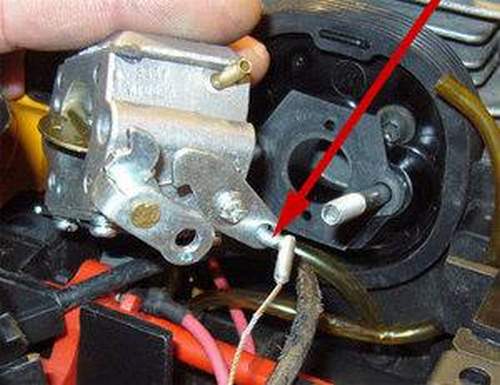 A hand-held chainsaw is an excellent assistant in the personal household, which is indispensable in the preparation of firewood, pruning tree branches, as well as in the construction of wooden log cabins for houses, bathhouses and outbuildings. The design of saws allows you to file and saw trunks of medium-sized trees.

The ease of maintenance of Partner and Huter saws allows even the first person to pick them up to handle them, but, nevertheless, a chainsaw is a complex device and requires a careful attitude. In the process of work, various kinds of malfunctions sometimes occur that affect effective operation, and the user must be able to cope with them.

How to adjust a carburetor on a chainsaw

The most common problem encountered during the operation of chainsaws is the incorrect operation of the carburetor, which leads to excessive fuel consumption and reduced power, so any user should know how to configure the carburetor on the chainsaw.

Chainsaw carburetors are also designed as automobile carburetors and therefore anyone who is familiar with the principle of the internal combustion engine is able to cope with the carburetor adjustment and can adjust it with their own hands.

By the manufacturer, new saws are delivered with an adjusted carburetor, but during operation the standard setting is violated and the saw requires re-setting. The documentation that came with the saw describes how to adjust the carburetor.

The device and principle of operation of the carburetor

The device and principle of operation of the carburetor of a chainsaw are the same as those of carburetors of internal combustion engines and perform the same function: preparing and supplying a mixture of air with fuel to the combustion chamber of the engine.

See also  How to sharpen a chainsaw chain by hand

The carburetor consists of the following parts:

Atmospheric air, passing through the air filter, enters the air channel of the carburetor, where there is a diffuser, which reduces the diameter of the channel, as a result of which a reduced pressure is created behind the diffuser.

Behind the diffuser throttle installed, which regulates the flow of air entering the carburetor. By partially blocking or opening the air channel, the damper controls the air flow, thereby regulating the engine speed.

Under the action of reduced air pressure created behind the diffuser, gasoline from the float chamber is sucked into the mixing chamber through the fuel nozzle and atomizer.

Video: How to Put a Carburetor On a Chainsaw

Engine speed depends on how much mixture of fuel and air enters the combustion chamber. The more we open the shutter, the more turns.

How to set up a carburetor on a chainsaw?

Carburettor adjustment consists in adjusting the nozzle and the air damper so as to obtain the optimum ratio of the amount of air and fuel in the fuel mixture.

If there is a lot of air in the fuel mixture and there is a lack of fuel, the mixture is lean, therefore the engine power is reduced.

See also  How to adjust the carburetor on a chainsaw caliber

If a lot of fuel and lack of air. the mixture is oversaturated, incomplete combustion of the fuel occurs, which leads to smoke, soot on the piston and in the exhaust pipe and increased fuel consumption.

How to adjust the carburetor?

For adjustment, you need to have a slotted screwdriver and a tachometer device that allows you to measure the engine speed.

Setup is carried out in the following sequence:

It is necessary to start after the engine has run and warmed up.

If the carburetor is completely misregistered and the engine does not want to start, set the adjustment screws L and H to the standard setting position: first tighten them completely, then unscrew them half a turn.

Start the engine and let it warm up, then proceed to adjust low revs using the L and T screws.

To do this, screw L to be unscrewed until the maximum engine speed is reached, and then screw in ¼ turn, and set the idle speed with screw T.

After completing the adjustment, it is important to check the engine in all modes. To do this, drown it and let it cool.

Then start the saw in cold start mode and monitor the engine idling. If gas smoothly increases and decreases, and the chain does not move, the adjustment is made correctly. Next should be checked during sawing. If there is a loss of power, carry out the adjustment again.

Carburetor is easy to disassemble, therefore, you can repair the carburetor of the chainsaw yourself. For example, if necessary, it is quite possible to do the following operations with your own hands:

Before proceeding with disassembling the carburetor, it is necessary to clean the dirt from the surface of the housing, as it can get into the carburetor and clog the holes of the needle valves and the nozzle.

Next, you should undock the mountings of the air and throttle control rods, dismantle the air filter and remove the cover of the main chamber by unscrewing the mounting screws. After that, you can begin to replace the above parts.

Very often, the cause of not starting the saw may be defects in the ignition system, in particular, candles due to the following reasons:

To check the condition of the candle, unscrew it with a special key from the cylinder head.

Nagar on a candle removed with a needle or awl, and if necessary with a sandpaper, then put it in place and try to start the engine.

We wipe the filled candle with a rag, dry it, put it in place and try to start the saw.

In some cases, the engine smokes and stalls at high speeds. The reason may be the clogging of the muffler with exhaust products, so you need to remove the muffler, rinse carbon deposits with gas, wipe, dry and put it back in place. While the silencer does not stand still, the exhaust outlet should be covered with a rag to prevent dirt from entering.

Setting up the carburetor of the saw and its minor repairs can be done without experience, but in order to do this correctly, you need to follow the algorithm prescribed in the attached documentation. However, you should not overestimate your strength, because sometimes it is cheaper to pay a specialist for quality service than to eliminate the consequences of your unprofessional repair.