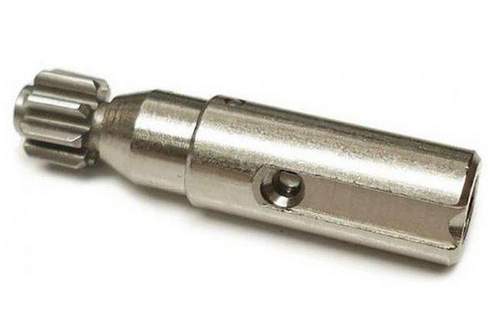 The oil pump drive consists of two parts, it is a plastic gear with a worm gear and a wire lever that transfers force from the sprocket wheel to the worm gear.

One of the main malfunctions of the oil system of the saw is a defective thread on the plastic gear of the oil drive, therefore, whenever possible, it is necessary to control its wear and thread quality.

The lever is rigidly fixed to the gear, and they are delivered as one part. The tip of the wire lever has a characteristic bend, which is designed for better traction with the drive drum-sprocket. A special slot is made on the drum for mounting the drive.

The Stihl 180 oil pump is completely made of metal and has a non-separable design. On the pump casing there is a receiving hole for oil and a groove-channel through which oil from the oil wire enters directly into the pump. The mechanism is installed in the body of the Stihl 180 chainsaw.

At the time of increasing engine speed, the drum. sprocket starts to rotate the worm gear for the wire lever, and it, in turn, causes the plunger of the oil pump to rotate, as a result of which the oil begins to be pumped through the oil channels to the chainsaw tire.

In the operation of the system, the oil line of the chainsaw is directly involved, at the end of which there is an oil receiver. The oil receiver is also a filter. On the second side of the oil hose, rubber expansion is performed, with which the hose is installed in the Stihl 180 chainsaw body immediately after the oil pump.

Malfunctions of the pump and the system as a whole

As you know, in this world there is nothing eternal and over time everything has to be repaired. So the Stihl ms 180 oil system is no exception, and has its own specific malfunctions. Let’s consider them in more detail.

Symptoms of a lubrication system are as follows:

All these signs, directly or indirectly indicate problems in the chain saw chain lubrication system.

The first thing to do after you suspect that chain oil is not flowing is to check its supply. There are two ways to do this. The first is described in detail in the instructions for the tool and consists in the fact that you need to start a chainsaw, add gas as much as possible and direct towards an obstacle.

With a good lubrication system, the oil will fly off the tip of the tire and a strip of oily drops will appear on the surface towards which the tire is directed. If there are any irregularities in the system, the surface will remain clean.

The second way is to remove the tire from the chainsaw and run it. When the engine speed increases, in the place where the tire shank is installed, oil will flow from the oil channel, if this does not happen, it is necessary to look for the cause of the malfunction.

Diagnostics should begin by inspecting and checking the oil receiver (filter) of the Stihl 180 saw. As a rule, if the filter is very dirty, the oil supply may stop.

In order to save, a clogged filter, you can try to clean, thoroughly rinsing it in gasoline.

Next, you need to remove the drum sprocket, and check the condition of the pinion gear. The thread on it should be clearly defined, not licked and not have any other defects, also with the gear removed, it is necessary to check the wire lever. It should compress the gear tightly and not turn, otherwise, the gear stands still and does not transmit force to the pump, as a result of which the oil supply stops.

If all of the above methods to detect and eliminate malfunctions have not yielded results, extreme measures must be applied, i.e., dismantle the pump.

How to remove the pump

The oil pump is installed on the right side of the bottom of the case, in the same place the oil pipe coming from the tank of the chainsaw approaches it. To remove the pump, you will first need to free the saw from the handle; for this, the back handle of the unit is untwisted and the throttle control rod is disconnected. At the next stage, you need to remove the plugs of the shock absorbers of the handle and using a powerful slotted screwdriver, squeeze them out of their seats on the handle.

After the handle is removed, the chainsaw body is turned upside down. The hose going from the oil tank to the pump will be visible immediately. It must be removed from the seat.

The pump itself is removed using a screw with an M5 thread and a wide washer. The screw length should be approximately 45-50 mm. A washer is put on the screw and it is screwed into the pump (the inside of the pump is threaded). Further, as the screw is screwed in, the stop from the washer will cause the oil pump to rise along the thread. Thus, the pump is removed from its seat. Before starting work, we recommend reading the article on how to disassemble the Stihl 180.

READ  What Oil For Chain Stihl 180

For a better understanding of the pump removal process, you can watch the video below. In the video, the SC master shows in detail how to remove the oil pump from the chainsaw, and also describes the main malfunctions of the feed system.

The Stihl 180 oil pump is a very high-quality and reliable part, therefore it is necessary to change it only in the last resort, when all other elements of the system have already been checked.

After the pump is removed, it must be cleaned and purged. As a rule, the main breakdown of an oil pump is its blockage. By removing it, you can install the pump in place.

Replacing the pump is only required if it is not possible to eliminate clogging.

The cause of oil smudges on the bottom of the chainsaw

The Stihl 180 chainsaw has a characteristic malfunction, which consists in insufficient sealing of the installation site of the oil hose in the chainsaw body and the appearance of a leak in this place. To eliminate it, it is enough to remove the handle of the Stihl MS 180 saw, disconnect the hose itself, rinse and degrease the seat in the body and the hose end, then apply sealant and reinstall the hose. Such a simple operation will reliably eliminate the malfunction and the oil will cease to leak.

The Stihl 180 chainsaw oil pump is a reliable and unpretentious part, which is rarely enough to cause a lack of chain lubrication. Disassemble and change the pump, it is necessary only in extreme cases, when there is confidence that the reason is 100% in it. You can do this with your own hands, because this operation is quite simple.