How to Remove the Big Gear Angle Grinder

Angle grinders among home masters are especially popular. The possibility of interchangeability of the working bodies allows for cutting, grinding, polishing operations.

The presence of a soft starter makes the tool safe and convenient. Repair of the angle grinder is simple and can be done independently. For those who decide to repair the ears themselves, you will need a diagram of the angle grinder of the desired type, a tool, lubricants and this instruction.

Any repair of a do-it-yourself angle grinder begins with an investigation of the occurring malfunctions. The device angle grinder is quite simple. A rotating rotor through a helical gear transmits torque to the shaft (spindle) of the working body. The necessary working tool is installed on the spindle, whether it is a cutting stone, a grinding or polishing wheel, and the necessary technological operation is performed.

By the way, about the shape of the tooth. On low-power angle grinders, spur gears are installed. Helical gears are used in angle grinders with a power of over 1000 watts. 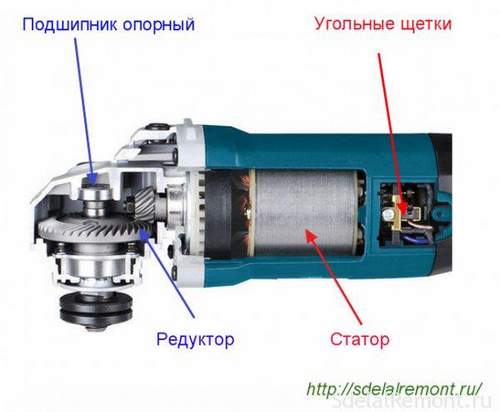 Angle grinders, like any tool, break down over time. Causes of malfunctions angle grinder may be different. They appear not only from improper use of the tool, but also from the untimely replacement of carbon brushes, lubricating fluids.

Regardless of the model of the angle grinder, malfunctions for all appear in the same nodes. Faults of grinders are conditionally divided into mechanical and electrical. For beginning repairmen, faults are divided into simple and complex.

Excessive loads when using the angle grinder in the "Cutting" mode cause increased wear not only of the bearing, but also of the gear teeth of the gears.

The main malfunction is the angle grinder on the mechanical part, wear or destruction of the sliding bearing on the shaft of the large helical gear reducer.

It is not difficult to troubleshoot an angle grinder if you have at hand its circuit, description and recommendations for performing repair work.

The weak point of any angle grinder is the bearings. And although there are few of them in the design, there are only three, it is they that most often lead to mechanical breakdowns. Bearings are adversely affected by:

The design of any angle grinder provides for quick and easy replacement of any bearing.

Faults in the angle grinder associated with wear or destruction of the sliding bearing on the gearbox shaft are characterized by the appearance of an unpleasant extraneous sound.

At the next installation of the working tool, check the shaft play by swinging at its end in different directions. Backlash should be absent or minimal.

The appearance of play indicates the need to replace the plain bearing.

It is better to remove the bearing from the shaft using a puller. It is best to get the inner cage of a destroyed bearing with a tap of the desired diameter, previously screwed into the cage.

Bearings are removed from the rotor using a puller or in a folk way.

Keys or strips of metal are inserted into the vise, the bearings are laid on the keys and, using soft metal and a hammer with a weight of at least 400 g, are pushed out of the shaft axis.

The degree of wear of the gears of the gearbox angle grinder is checked for a contact spot. Previously, the gearbox is completely cleaned of old grease. A special blue is applied to the small gear wheel of the gearbox, the gearbox rotates. Next, you need to remove the driven large helical gear and look through the magnifying glass at the contact spot. It should occupy a total of at least 50% of the tooth surface.

But such a malfunction is eliminated only by an experienced craftsman. Most often, the gears that are licked, cut or destroyed change completely, and in pairs.

How to disassemble the gearbox angle grinder

When repairing a gearbox of any angle grinder, the most difficult task is to remove the gears and press out the thrust bearing.

Dismantling of the gearbox begins by removing the gearbox cover pos.1 and disconnecting the stator housing and releasing the rotor pos.2. The freed rotor is clamped in a vice and the nut of fastening pos. 3 is unscrewed of the driving small gear.

A spindle bearing is pressed into the gearbox cover. To get the bearing, in some angle grinders it is necessary to remove the circlip securing the support bearing and remove the bearing.

Video: How to Remove the Big Gear Angle Grinder

The destroyed bearing pos.1 in the gearbox housing pos.2 is easiest to get by prying it with a screwdriver.

On other models, the locking ring locks the gear in the spindle.

The driven large gear on the spindle is mounted in several ways:

The driving small gear is either screwed onto the shaft along the left-hand thread (in some Sparky models, the right-hand thread), or is fixed with a keyed connection and clamped with a nut.

How to remove gear gears

Gear repair consists in their replacement, and only in pairs.

Long and uninterrupted operation of the gearbox depends on the availability of a sufficient amount of lubricant and its timely replacement.

The spindle lock button is designed for quick removal of the working tool. The button breaks when pressed on it at the time of rotation of the disk. Repair angle grinder is a complete replacement button.

The button should only be pressed in the fully stopped state of the angle grinder.

The electrical circuit of the main part of the grinders is almost the same. The rotor transmits torque through the gearbox to the working tool. The rotor rotates in the stator field. The control circuit consists of a button that regulates the speed and provides a smooth start-up of the tool, carbon brushes, providing the transmission of alternating voltage to the collector lamellas. Power is supplied to the instrument via a connecting cable.

The main malfunctions of the angle grinder in the electrical part include:

Faults An electric angle grinder is best identified by a tester or other device. Suitable for these whole and home-made device, popularly called "Arcade".

The scheme of the angle grinder is quite simple and does not require special knowledge. It is only necessary to observe caution and safety when performing repair work and to know electrical engineering in the volume of a secondary school.

One of the common failures of an angle grinder is the inability to turn on the tool or a spontaneous stop during operation. The cause of such malfunctions is a break in the power cable, item 27 at the entrance. The malfunction is eliminated by replacing the cable or throwing out the failed section. The fault is easily found with a tester.

If there is no tester at hand, but there is a screwdriver with a neon indicator light, then the malfunction can be found by alternately connecting the power wires to the phase.

Remember! The length of the carbon electric brush cannot be less than 8 mm.

Timely replacement of carbon brushes avoids most of the malfunctions.

The degree of wear of carbon brushes is characterized by the types of sparking in the collector. Sparking should be uniform throughout the contact patch of the carbon brush and lamellas and not exceed a length of more than 8 mm. Circular arcing indicates a malfunction in the rotor circuits.

In angle grinders, it is recommended to use carbon brushes only by tool manufacturers. Homemade carbon brushes can be installed, but only for a short period and immediately replaced as soon as possible.

Repair of the power button and speed controller

Malfunctions of the power button are most often manifested in the difficult and unreliable turning on of the tool during start-up. Such a malfunction spontaneously appears and disappears.

It is unacceptable to work an angle grinder with a faulty power button. This malfunction leads to jamming of the cutting discs during operation and their destruction with unpredictable consequences.

The malfunction is eliminated by completely replacing the button with a new one.

In modern models of grinders, a soft starter with a speed regulator is built-in. It cannot be repaired, but will require a complete replacement. No, advanced left-handed masters, of course, can fix such a knot.

The stator breakdown is indicated by spontaneous unwinding of the machine shaft, the angle grinder begins to gain maximum speed. Such a malfunction indicates the appearance of an interturn circuit in the stator winding.

Some malfunctions can only be fixed by specialists. Stator uptime can only be extended by timely cleaning, lubricating and replacing carbon brushes and bearings.

Usually the stator fails quite rarely. This leads to frequent overheating of the tool during operation. The malfunction is manifested by a strong heating of the body of the angle grinder and the smell of burning insulation.

The stator can have either an open or a short circuit. Without disassembling the stator, these malfunctions can be easily found using the IK-32 device.

The stator is removed easily, but in different models of angle grinders in its own way.

Rotor failure in the angle grinder is caused by improper operation of the tool, frequent overheating, untimely replacement of carbon brushes, and abrasive particles and dust getting on the collector lamellas.

First, the length of the spark on the collector increases, then a burning smell and, at the last stage, smoke appear. The operation of a faulty gearbox is accompanied by a knock and a hum.

Destruction of even a pair of teeth leads to improper operation of the tool.

It is possible to extend the life of the rotor by preventing dust from entering the tool, preventing the tool from overheating, timely changing of carbon brushes and lubricants, using only those working tools and the diameter recommended by the power tool manufacturer.

The rotor is a complex unit that requires repair in service centers. But DIY lovers can repair the rotor on their own.

Repair of the collector and rotor lamellas

Dismantling the rotor is not particularly difficult.

The procedure for extracting the rotor from an angle grinder:

The removed rotor must be carefully inspected. If large grooves are rubbed on the sipes, they should be removed by turning the collector in a lathe.

With minor grooves, the defect is eliminated by grinding. The rotor is clamped into an electric drill chuck and the output is removed with the help of a file and sanding paper. The process is simple.

The drill is clamped in a vice or securely mounted on a flat surface. The end of the rotor on which the lamella is placed is inserted into the drill cartridge and is securely clamped. Bearings are previously removed from the rotor.

The second end of the rotor must be supported by a set of wooden blocks. The drill turns on and a small number of revolutions is set. At the first stage, use coarse sanding paper No. 40.80, at the final stage, use finer No. 120.200.

In addition to general malfunctions in models of angle grinders of different manufacturers, there are also specific breakdowns that are characteristic only for the tool of this manufacturer. But more about that in another article.