How to Repair a Makita 2450 Hammer

A hammer drill is a percussion drilling tool that simultaneously performs the function of percussion and drilling equipment when working with extremely durable materials.

The device uses two ideas at the same time: the tool rotates and moves in the longitudinal direction, transmitting the impulse of impact to a solid surface.

Hammers always operate in extreme environments with a high degree of dust.

The uptime is affected not only by the operating conditions, but also by the quality of the components included in the tool.

Makita 2450, 2470 rotary hammers are reliable tools of high quality. But even the most reliable tool requires proper care and timely maintenance.

To perform maintenance on Makita 2450, 2470 rotary hammers, it is imperative to familiarize yourself with the internal contents of the tools that make up the components. This manual will help you find out the weaknesses of the Makita punch.

To carry out repairs of the Makita 2450, 2470 rotary hammer, a person who owns locksmithing skills and has knowledge of electrical engineering is allowed to do it himself.

Remember! When repairing a rotary hammer, it is necessary to comply with safety regulations when working with electrical appliances.

Makita 2450 and 2470 rotary hammers are assembled almost in the same way and practically from the same, interchangeable parts. Repairing them is no different. 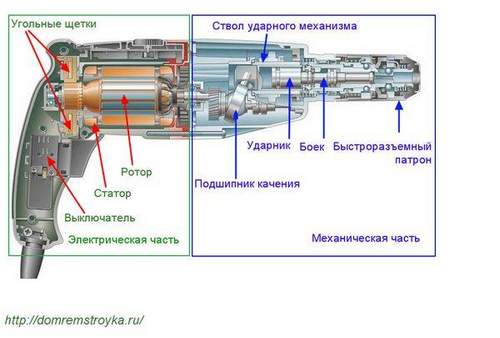 For ease of repair, the assembly diagram and catalog of parts for Makita rotary hammers are given below.

The procedure for disassembling the mechanical part of the punch

The mechanical assembly is designed to transmit the rotational moment of the shaft to the tool, creating not only torque and translational impact impulse.

The task of the mechanical assembly is to transmit rotation from the rotor to the tool, while providing the tool with longitudinal movement.

Disassembly of the punch begins with the removal of the quick-detachable cartridge.

Having disassembled the cartridge, unscrew the four screws pos. 10 that fasten the gear housing cover pos. 14 of the mechanical unit and the perforator body and, pressing on the end of the perforator shaft, remove the black plastic cover.

Video: How to Repair a Makita 2450 Hammer

Remove the cover of the mechanical unit

To remove the mechanical block from the green stator housing, you must:

3. After releasing the springs of the brush holders pos.63.66, remove the carbon brushes pos.65.

Now you can pull out the mechanical block from the stator housing.

Having released the mechanical unit, it is necessary to disconnect the rotor from it. Rotor pos. fastens in the mechanical block due to friction of gear teeth and is pulled out by staggering and disconnecting at the same time.

Dismantling the mechanical block of the shock assembly

The mechanical assembly is assembled on the inner case, item 49. To remove the intermediate shaft, unscrew the two screws pos. 43 at the base of the housing. Another intermediate shaft is fixed by the lever of the mode switch.

Two words about the mode switch

In Makita 2450, 2470 rotary hammers the lever which provides the tool with three operating modes is installed. The hammer drill can simply drill, simply hammer, and hammer while drilling. The switch lever is worn on the axis of the inner case and is fixed with a compression spring pos. 85, a washer pos. 87 and a lock ring pos. 86.

It’s time to remove the countershaft.

To disassemble the countershaft, use the diagram attached to this manual.

Photo of the intermediate shaft circuit showing the disassembly order

From the shaft pos. 40, remove in order:

And on the other side of the shaft, remove:

To disassemble the shaft of the percussion mechanism, it is necessary to pull it out of the inner case.

From the shaft, pull out the cylinder pos. 32, inserted into the internal cavity of the shaft.

The cylinder is disassembled very simply:

To disassemble the shaft itself pos. 21 of the shock mechanism, it is necessary to remove from the side of the cartridge installation shaft:

And from the side of the inner cavity of the shaft it is necessary to remove:

Dismantling the electrical part of the Makita 2450, 2470 rotary hammer

The electric part of the Makita 2450.2470 rotary hammer includes:

To remove the stator, it is enough to knock on the end of the plastic green case on the side of the stator with a wooden mallet or bar.

With frequent tapping on the housing, the stator spontaneously protrudes beyond the edges of the housing, and then it is removed by hand.

The remaining elements of the electrical part of the Makita 2450 or 2470 rotary hammer are easy to dismantle because they are not fastened.