How to Saw Chipboard with a Hand Saw

Before talking about the absence of chips when sawing chipboard and deciding what to saw, let’s decide what it means without chips? Each in its own way relates to their number after cutting, for one there are many, and for some, a dozen at the very time. Therefore, let’s look at not one, but just three types of chipboard cutting available at home, from which you yourself can choose the most suitable. For obvious reasons, we will not consider the use of expensive equipment designed for sawing laminated chipboard, this is the lot of professionals. We are still furniture lovers and therefore we will use the appropriate tool. 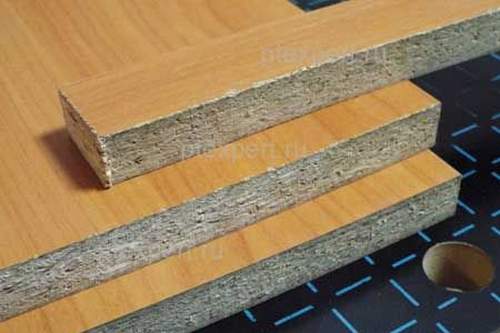 There are three parts in the photo, the upper one is sawn with an electric jigsaw, the middle one is sawn with a hand circular saw (parquet), and the lower one is also sawn with a manual circular saw, but then processed with a manual milling cutter. Of course, in each case, you can achieve different results, the whole thing is experience and dexterity. But in general, the capabilities of the equipment under consideration give roughly the same results for chips on chipboard.

Chipboard without chips with a jigsaw.

In this case, three things allow you to get a more or less good sawing result.

Видео: How to Saw Chipboard with a Hand Saw

Now let’s look at whether to “scratch” a laminated layer. Perhaps this can help, but only if the following conditions are met. Since the file forms chips not only on these layers, but also on the extreme layers of the chipboard, it is necessary to “scratch” them accordingly. The width of the “scratched” line should exactly correspond to the thickness of the file (if you already do it, it will stab, make it wider and there will be a mark on the workpiece). The lines must be strictly above each other and must be cut strictly along the line. Think about how realistic it is to do it at home with your own hands, and the answer about “scratching” will be obvious.

The cause of chips in this case is the impact of cutting teeth, but not only in the direction of the cut, but also on the opposite side. (Vibration from the power tool does not allow to drive the parquet perfectly evenly, as a result of which the disc is skewed relative to the cut). The guide in this case not only allows you to cut the chipboard evenly, but also prevents the appearance of chips from the opposite direction in the direction of sawing. When choosing a disk for sawing a laminated chipboard, you should pay attention to the number of teeth, the more teeth, the cleaner the cut.

Chipboard without chips with a manual milling cutter.

Before processing the furniture parts with a milling cutter, it is necessary to cut them with a margin of 3-5 mm from each side being machined. Unlike previous cutting methods, the hand milling cutter leaves behind an ideal surface. Chipping after such processing is rare and at the same time, it turns out to maintain the perpendicularity of the cut. So far, we have considered only straight sawing, but if it comes to sawing out various kinds of circles and roundings, then there is no alternative to a jigsaw and a milling cutter. The disadvantages of using a milling cutter include the need for skills to work with it. We will talk about them in other articles.