How to Test a Cordless Screwdriver Battery with a Multimeter

During intensive use of the screwdriver, there is a possibility of its breakdown. And one of the most vulnerable parts is the battery. Consider how to check the battery of a screwdriver for performance using different methods.

General recommendations before checking the battery

Immediately before checking the battery, you need to clearly determine what type of battery the battery is. Depending on this type, the approach may be different. For example, the most common nickel-cadmium batteries are highly sensitive to operating conditions. Infrequent or irregular full recharges significantly reduce battery capacity and the battery does not use its full resource. We consider the types of batteries in more detail below.

It is also recommended that you fully charge the battery before checking. This will make more accurate conclusions about the health of the device. It is proved that the most accurate indicators are removed under load. And a full charge is a very suitable type of load.

Before checking, it is necessary to minimize the effect of the "memory effect" on the device. Since this effect appears in batteries in case of improper operation, in order to eliminate it, you must use the battery several times in accordance with all the rules.

It is enough to conduct charge / discharge cycles 3 times so that the effect is significantly reduced. For an accelerated discharge, it is best to use an incandescent lamp, which together with the multimeter will need to be connected to the battery.

If everything is done correctly, then after several complete cycles the battery will be able to restore its capacity and can again be used in a screwdriver. If the operation did not help, then the problem was different.

The most common type of battery. They charge fast enough and have a good amount. Differ in durability and resistance to external influences. The average number of charge / discharge cycles can reach 3500. When using accelerated chargers, the battery does not wear out faster and can last a long time. Separately, it is worth noting the cheapness of such batteries and the ability to operate at temperatures below zero.

But there are also disadvantages, the main of which is the so-called "memory effect." The batteries are quite toxic in the event of a malfunction and have a high self-discharge rate. Due to toxicity, manufacturers are now trying to rapidly reduce the percentage of such devices.

To extend the life of such a battery, it is recommended that you completely discharge it before recharging. 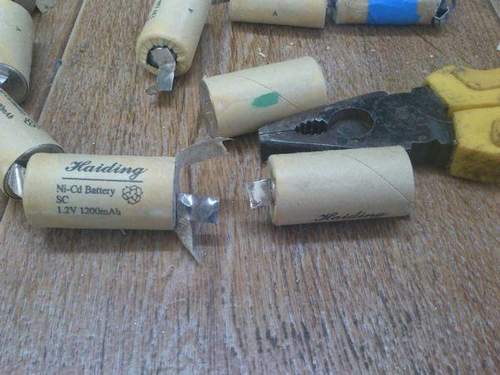 A much more expensive analogue, which however has a number of undeniable advantages. Such batteries are used in advanced models of screwdrivers from well-known brands.

Such batteries have a large capacity and a much lower percentage of charge loss due to self-discharge. However, such batteries are strictly not recommended to overheat and leave completely discharged for a long time. This can lead to crystal degradation and battery failure. When overheating, there is a risk of explosion of such a device.

Like the first view, a lithium-ion battery is able to function in cold weather.

To check the power supply of the screwdriver for operability, you just need to take the current and voltage indicators at the time of charging. over, it is necessary to repeat the procedure several times to get the most accurate values.

Video: How to Test a Cordless Screwdriver Battery with a Multimeter

Stages of voltage increase U:

Such observations suggest that the battery is fully operational and functional. In most cases, no further analysis is required.

At the same time, a working battery will also stably increase the current strength within an hour after the start of charging. If after an hour the indicator reached a value of 1 A, then this indicates the health of the device.

There is also a method for accelerated battery testing, which consists in measuring the voltage at no load (no load). This voltage should reach the required value, which is directly related to the operating voltage of the battery cells (cans). If the indicator is lower, then the probability of failure of one or more elements is high.

A separate type of checking the battery capacity with a multimeter from a screwdriver can be considered testing under load. It uses additional equipment that needs recharge. Incandescent lamps are ideal for this. The power of such a lamp should correspond to the power of the battery. Otherwise, the verification results may not be accurate enough. In most cases, the power is equal to half the current supplied by the battery, multiplied by the voltage. For standard batteries from screwdrivers, 12 V. lamps are used in the test.

The battery is connected to the load through a multimeter, which is then taken readings. After a few minutes, you need to measure the voltage. It should be higher than 12.4 V. If such an indicator was not achieved, then obviously there is some kind of malfunction. In addition, it is recommended to pay attention to the brightness of the bulb. It should be stable enough.

The malfunction can lie not only in the battery, but also in the charger itself. Therefore, you first need to check the charger for a screwdriver with a multimeter.

It includes a direct current measurement mode and is connected to the charger using probes. The current value on the meter should be as close as possible to what is indicated on the housing. If this is not the case, it is better to replace the device with a new one.

After the first stage of the check, it will become clear whether the device is working properly or not. If testing indicates a mismatch in the parameters, it is logical to proceed with the repair, which is accompanied by the replacement of faulty cans.

It is necessary to open the battery housing and identify the malfunction. For this, a multimeter is also used, which is connected to each element separately. The voltage of each can should be at least 1.2 V. All inconsistencies indicate a breakdown of the element. Defective cans must be removed from the general circuit and replaced with new ones.

If such a check does not reveal a breakdown, then you need to again resort to testing under load. And here the resistance level, which is directly related to voltage and current strength, is already of fundamental importance. Each element is tested separately, and resistance is also calculated. In the event of a malfunction, this indicator will clearly deviate from the norm and will quickly identify a broken element.

Do not rule out the breakdown of the screwdriver itself. Identify this fact will help using a known good battery or connecting equipment directly to the network. The second approach will also be an excellent option in case of urgent need to use the tool. Mobility will certainly be lost, but the functionality can be used.

The screwdriver can be used with an external power supply plugged into a power outlet. Then you just need to choose a rectifier with the necessary parameters. Movements will be limited only by the length of the low-voltage cable connected directly to the instrument.

You can also create your own prototype of a conventional network screwdriver. Then the power supply will be placed in the battery case and will make it quite convenient to use the tool. In this case, the main issue will be the selection of the required small-sized power supply with suitable characteristics. The process can be complicated by the need to find a powerful but compact transformer.

It is advisable to check the battery of the screwdriver regularly to prevent various breakdowns at the most inopportune time. Of course, this applies only to preliminary testing, without disassembling the case. Batteries are fairly short-lived components that have to be replaced periodically. But proper operation in compliance with recharging standards will help keep the devices operational for as long as possible.