How to Test a Lithium Screwdriver Battery

A screwdriver is a necessary tool in the household, but the time comes and its source of energy. the battery stops working. Models are constantly changing and sometimes it is not possible to find the right battery. However, you can completely restore it or extend the service life by 2-3 years. This article explains how to repair a screwdriver battery. 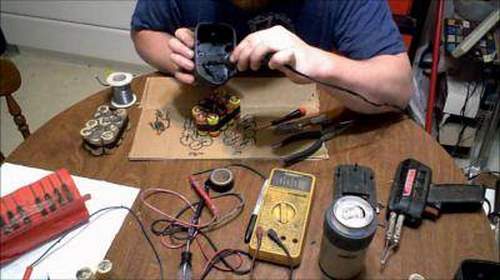 When solving the question of whether it is possible to restore the battery of a screwdriver, it is necessary, first of all, to figure out how to extract elements from it. The battery is housed in a plastic case of two halves. First, unscrew the connection screws. If the connection is made with glue, you will have to tinker with a screwdriver or a chisel. Disassemble carefully so that you can then seal the case again.

Inside are elements connected in series. Some designs use a parallel-series connection.

When deciding how to restore a screwdriver’s battery, it is necessary, first of all, to identify faulty banks that spoil its operation. If the battery runs down, it must be charged, and then check the voltage on all elements. It should not differ from the nominal by no more than 10%.

Repair consists in how to restore the battery capacity of a screwdriver as a whole. It is affected by the health of each element. It must have a given capacity, which is understood as the ability to power the load connected to it. Sometimes it is better to replace failed elements that are quickly discharged. They can be detected by corrosion or the presence of characteristic electrolyte traces on the surface.
One or two elements can be a serious obstacle in the work of the entire line.

If the battery has been used for more than 3 years, then most elements may be faulty. In this case, it is better to replace them all. It is important that they match voltage and size. The cost of batteries assembled separately is lower than new ones.

The serviceability of each can is checked by the value of internal resistance, which should be about 0.06 ohms. To do this, connect the load to it (a resistor of 5-10 ohms) and at the same time determine the current and voltage. It is convenient to use low-voltage incandescent lamps. The measurements are made with two different resistances, respectively 30% and 70% of the permissible load. The 2nd voltage is subtracted from the 1st voltage, and the 1st is subtracted from the 2nd voltage. Then the results of the subtraction are divided and, in accordance with Ohm’s law, we find the internal resistance of the battery.

READ  How to Choose the Right Screwdriver Adapter

The battery is often sold complete with a spare. Of the two, you can collect one and still have banks in stock. It is advisable to use them somewhere as power sources, for example, for a flashlight with a car lamp.

After the diagnosis, the items that have been tested are collected in a ruler. The selected kit must be soldered in the same order. The can body has a negative polarity, and the middle bus has a positive polarity. Then, without assembling the battery, you should connect the charger to it. In this case, it is necessary to control the temperature of the elements. If they are working, then there should not be a strong overheating. After the charging time has elapsed, and also after a day, the voltage should be measured on each element. If any battery "sits" more than 10%, it must be replaced with a new one. After the battery passes the test, you can finally assemble its case. The fastening screws are screwed into place according to size, and acetate-acrylate (“Super-glue”) is used as glue. With proper selection of elements, the battery will serve as new. After charging, it should be subjected to intensive training, creating a maximum load for the screwdriver until it is discharged. Such cycles should be repeated 2 more times, and then. 1 time per quarter.

Non-tested batteries do not rush to throw away. The main reason for their failure is the evaporation of water through a sealing gum located between the body and the middle tire. When there is a full “zero” on it, the battery is briefly charged with a pulse supply of 12 V through a resistance of 40-50 Ohms. In this case, it must be controlled so that the case does not overheat. If after this there is still no tension on it, the jar can be thrown away.

Video: How to Test a Lithium Screwdriver Battery

To restore electrolyte, some craftsmen drill mini-holes under the syringe needle in the side recess of all battery batteries. Then the cans are filled with distilled water. After the batteries should lie down for a day. The battery is then "trained", charged and the voltage on each element is checked. The holes are sealed with silicone.

How to restore a screwdriver battery

The batteries inside are all similar in appearance. They consist of successively soldered cans. The result is the total battery voltage at the output contacts. Elements are used in the following types:

Screwdriver "Interskol" is one of the most popular due to its versatility. In addition to the main function, it can also serve as a drill.

Lithium-ion batteries do not have this drawback, but have a much higher price. During operation, when every minute counts, a small charge is often required to maintain the required power of the screwdriver. Here, such batteries are indispensable because their capacity can be quickly restored.

Screwdriver battery "Interskol" the buyer chooses independently, depending on preferences, capabilities and the required work. In most cases, nickel-cadmium batteries are used.

How to restore a screwdriver battery "Interskol"if it has not been used for a long time? During operation, you must try to ensure that there is no voltage drop to zero. For 1.2 V cans, the discharge is up to 0.9 V. If during long-term storage it is completely discharged, then the charger may not “see” it. It is necessary to “push” the battery with another, more powerful current source, so that a small voltage appears on it. After that, you can connect it to the standard charger.

Before restoring a screwdriver battery "Makita"First, you need to disassemble its body. It consists of 2 halves connected by glue. If you gently tap the battery case with a rubber mallet, the glue will lag behind. Disassembly problems may occur in some places. An additional hand tool may be needed there. Next, disconnect the halves of the housing, holding the screwdriver terminals.

According to the performance characteristics of a drill / driver "Makita" approaching a network tool. Autonomous power supply is provided by 2 replaceable Li-Ion batteries. Computer charging technology allows you to restore them in just 22 minutes. At the same time, the battery life is significantly increased.

Faulty banks must be replaced with similar new models. If they are difficult to find on sale, you will have to assemble one from two batteries. Factory welding can be contact, and during repair it will be necessary to create a joint by soldering.

READ  How To Charge A Screwdriver Battery Without A Charger

How to restore a Bosch screwdriver battery

Bosch screwdrivers are great for unprofessional use. They have batteries with Ni-Cd cells. They withstand large load currents, but quickly self-discharge (in 3-4 weeks). At least 1 time per month they must be restored so as not to fail. In addition, during operation, the elements are unbalanced and capacity is lost over time.

One of the recovery methods is disassembling the case and “training” each element separately. If this does not help much, some of them will have to be replaced. Then the battery will last a long time.

How to restore the battery of a Hitachi screwdriver? Both Ni-Cd batteries must be charged, after which they should be disassembled and measure the voltage on each bank with a load of 1.5 Ohms. Elements showing a lower voltage can be thrown away, and assemble one high-quality battery from the whole. Only 1 or 2 banks can spoil the impression of the battery. How to restore a screwdriver battery "Hitachi", as well as all other models, depends, first of all, on the type of elements installed in them.

Included with a screwdriver are 2 batteries for Li-Ion cells. If one of them does not charge, this still does not indicate a malfunction. It is possible that he is too discharged. To do this, you can try to "train" the battery by applying a pulse voltage to it, and then put it on charge. The easiest way is to connect for a few seconds to a charged battery.

After the Aeg screwdriver battery was not restored by the above method, its case should be disassembled and each can checked.

How to restore a screwdriver battery? There are several ways. Before disassembling it, one must try to find the cause of the malfunction, which may also lie in the mechanism or charger. By observing the battery operating rules set forth in the instructions, you can significantly extend its life.