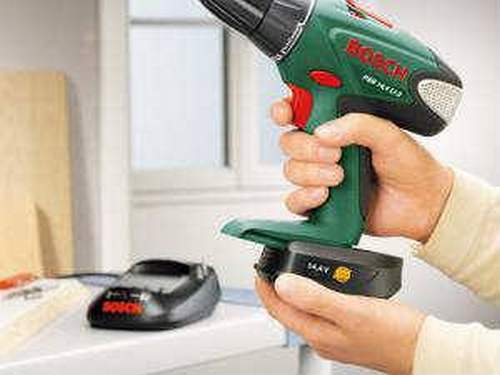 The problem facing everyone who has at home any electric tool powered by a battery is increasing their life. Basically, all household models of screwdrivers are equipped with metal hydride (NiMH) or nickel-cadmium (NiCd) batteries. And this is primarily due to their lower price compared to lithium-ion (Li-ion) counterparts.

Despite the high cost, the latter is preferable in many respects. It is enough to indicate only two. the almost complete absence of self-discharge and a longer shelf life. It is not necessary to use a screwdriver in everyday life, but only occasionally, so it makes sense to convert the screwdriver’s battery from NiCd (or NiMH) to a lithium-ion battery on its own, without spending money on a sample of industrial production. How to do this is this article.

All the stresses indicated below are only for one of the screwdriver models, as an example of calculations.

Algorithm for converting a battery to a lithium-ion battery

It is worth recalling a secondary school here. when the batteries are connected in series, their voltage ratings are summed up. For example, if a screwdriver needs 14.4 V for normal operation, then instead of one (regular) battery, it is enough to buy 4 pieces of 3.3 V. It will be enough, since lithium-ion cells do not sink too much when you turn on the tool.

Based on the foregoing, the soldering iron should be selected so that its power is sufficient for quick melting of the solder. The author used the most common in everyday life. 65 W / 220. With a tool with a higher power. 100 W. it is more difficult to work, since overheating is difficult to avoid. Here you need experience and accuracy. The same goes for a 40 W soldering iron. Have to increase the heating time, so you can "go too far." Although this is a recommendation based on personal experience, the author is not entitled to impose his opinion.

Before you start soldering, you should decide on the layout of the battery compartment. That is, arrange all the elements so that they fit comfortably into it. After that, the purchased batteries are fastened with adhesive tape (PVC, adhesive tape).

They are gradually oxidized. So they need to be cleaned up a bit. It is lightly, with the help of a fine-grained (grinding) skin.

Despite the fact that the use of lithium-ion batteries provides many advantages. the lack of “memory” of the battery, extremely low self-discharge, the ability to work with a screwdriver at low temperatures, long (up to 8 years) shelf life. they are more sensitive to compliance with charging technology. If you do not control the voltage rating, then the Li-ion batteries are quickly destroyed. Therefore, you will have to purchase a special, more expensive charger. The one with which the screwdriver was originally equipped is not suitable for lithium-ion batteries.

On the Internet there are recommendations for the reuse of Li-ion batteries that were previously installed in other technical devices. For example, to ensure the battery life of a laptop or phone (cell). There are many options. The author suggests asking a simple question. is such a saving rational if second-hand products do not ensure the normal functioning of a screwdriver, taking into account the specifics of using this power tool? Perhaps for some time he will carry out his task, but how efficiently and for how long is a completely logical question. Therefore, such advice of various "homemade" hardly deserve attention.

The author draws attention to the fact that without sufficient knowledge in radio engineering it is not practical to engage in the independent manufacture of electronic circuit boards. The slightest mistake, for example, in the selection of parts for the balancing circuit will lead to the fact that the elements will begin to “fly out” one by one, and they will have to be dealt with regularly replacing them with new mini-batteries.

Why are the terminals on the car battery oxidized

How long does the car battery charge

Do I need to completely discharge a new smartphone battery

How to charge a laptop battery without a laptop

How to find out the battery year

I have one question. if I buy bmsk I can charge the batteries with my own charger. If not, then what to charge?

This is exactly the answer I have been looking for for many months. Already tired of watching reviews on YouTube, reading articles, the same thing everywhere, everyone stupidly talks about how to solder BMC to batteries and that’s it.

I would like to know, well, remade, well assembled, and charge it later, without a collective farm, without extra devices, roughly speaking by analogy with standard use. If this is not possible, then these are your nonsense alterations, because lithium batteries have hundreds of minuses compared to nickel-cadmium ones. And there are only two pluses, the current strength and the weight of the whole structure. But all this is killed by shamanism with charging.

The author of the article indicates how you are right and think that before undertaking the alteration it is necessary to weigh the pros and cons, evaluate the economic component of all the questions from what and how all the plans will be assembled and then work. For example, there is no idea to buy a shurik on nickel in order to convert it later to lithium, at the same time having bought batteries for it, a control board, and possibly not one that matches the type of acc.

For example, in lithium fume phosphate batteries, as the author, he indicated very good current performance indicators and they seem to be not very sensitive to minor disruption of discharge modes. But they do not suck similar rated voltages with lithium batteries, and the conditions and cutoffs for the end of the charge and discharge modes are also different. Accordingly, both the memory and the control board should also be able to work with this type of battery without violating these modes.

I saw how they left two old barrels with clamps for charging. Just 18650 were soldered directly to them a few pieces. If possible, unsubscribe?

The installation of battery on the video was made with gross errors. Before collecting batteries into batteries, they must be discharged to the same state with a voltage of 2.5-3 V, the same current. This is at least, but it is better if they are selected according to the capacitance and internal resistance of the elements, especially with parallel connections. This cannot be done without a special charge-discharge device. The author “installer” has the impression that he did not go to school even during assembly, stupidly short-circuited several times the battery and its individual segments with a metal tool. In this case, the control board can easily fail. If the batteries are charged for example the smallest thing that can happen this will burn out the connecting conductors, tracks on the board, nickel on the batteries. The control board must be isolated from the battery by a non-fusible insulator, such as an electric board or another. Also with regards to battery segments, at least those that fell on the ends of the assembly. Battery insulation is a shrink film, it can easily be sold in the housing during assembly or during operation, and you can guarantee that a part of the battery will be shorted to the housing of another battery, after which you’ll find yourself in the hands or in the trunk of the car in some kind of pit or garage flaming brick. Pay attention to the native nickel-cadmium batteries, they are insulated with cardboard. In general, this video is about how to do it. I myself went through a huge number of batteries and I have experience in various experiments, and I’ve seen such home-made ones. In the best case, then they bring a non-working battery for repair. In the worst case, with a burning brick, there’s nothing you can do but hastily throw it out of the trunk until the whole car has caught fire.