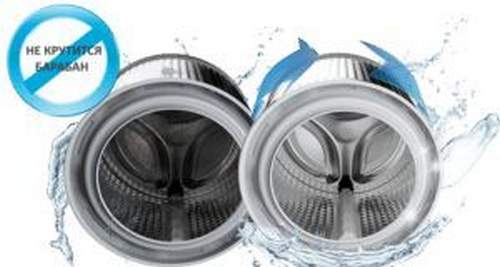 The washing machine, having typed water into the tank, stood up in a ditch? This means one thing, you need to urgently look for the reason why the drum does not spin. It’s not necessary to call a wizard for this, you can try to deal with the problem yourself, and we will show you where to look for a malfunction and what to do.

We define this failure more precisely in order to limit the range of possible malfunctions. In this article we will keep in mind those cases when the washing machine, having typed water, does not start washing, the drum does not spin. At the same time, the pump drains the water and works in normal mode. But if you listen, you can hear a sound similar to crackling. This is the sound of the engine, which either rotates and rotation is not transmitted to the drum, or does not rotate at all.

The reasons for this may be the following:

Important! In cases where the drum spins, but badly, there may be more reasons.

The drum in a Bosch brand washing machine may stop spinning if the engine does not spin it. Everything seems to be logical, but in practice, you still need to understand what happened to the engine itself and why it does not spin the drum. It is very important to find out if the engine is not spinning under load or not at all. If the engine works, rotates the shaft, but as soon as you attach a belt to it, it stops turning it, which means that the problem is in the brushes and you need to change them. What are we doing?

Engine brushes do not change one at a time. Either they should not be changed at all, if they are intact, or they should be replaced immediately with a pair.

If the brushes are intact, it means that the drum of the Bosch brand washing machine does not spin for another reason, it is very likely that the tachometer, which is mounted on the engine casing, is to blame. This is the same element from which you previously removed the wires when you dismantled the motor.

We take a multimeter, set it up to test the resistance, and check the tachometer. If the tachometer is working, we continue to search further for the reason why the washing machine does not spin its own drum. At this stage, you will have to disassemble the engine casing and examine the lamellas or, as they are also called, collector plates.

If the lamellas are intact and look as shown in the figure above, the motor winding may be broken. You can verify this as follows:

To understand that a belt break has occurred in the washing machine, you can twist the drum by hand. If during rotation there is no resistance, and the drum rotates easily, then the belt either fell off, as it was stretched, or torn.

It is not difficult to replace the drive belt in the machine. To do this, remove the back of the case using a screwdriver for a hexagon. Then we remove the drive belt by pulling it with one hand towards ourselves, and with the other turning the pulley. Now put a new belt on the engine pulley, and then on the drum pulley, turning the pulley with one hand. For this work, some skill is needed, so do not despair, if you did not manage to put on the belt the first time, try again.

Important! The drive belt for the Bosch washing machine must be purchased by the serial number indicated on the belt itself.

When the drum cannot be twisted by hand with the washing machine turned off, the reason for this is a foreign object caught between the tank and the washing drum. You can try to remove such an object from the tank through the hole for the heating element. Necessary:

READ  How to Distinguish a Bosch Punch Original

In order not to have to pull something out of the car, carefully check the pockets of clothes before washing, do not forget to look into the drum and the powder tray, and suddenly there should be something that should not be there.

So, almost all the malfunctions that cause the drum to stop completely in the Bosch washing machine before washing can be eliminated independently. Except for when you need to disassemble the tank. Such work requires skills, a place to carry out repairs and time. Such a malfunction does not happen often. Have a good repair!