How to understand whether your saw is divorced correctly?

A divorce can be considered optimal when there is a mixture of 65-70% sawdust and 30-35% of air between the saw blade and the tree that it is sawing.

The external manifestation of the fact that your saw is bred correctly is that 80-85% of sawdust is thrown out of the cut.

In the case when you have bred the saw too much, there is a lot of air and insufficient removal of sawdust.

In the event that the saw is not wired, tightly pressed hot sawdust remains on the surface of the board.

A saw that is too diluted will cut in jerks, a divorced saw will not cut enough in waves.

Sharpen the saw with minimal removal of metal (i.e., remove burrs) and then breed.

If there is a problem with sawing, then read 13 points below. it will help you.

At the entrance to the log, the saw jumps up and saws exactly to the end of the log, after which it falls down. This phenomenon is called depressions, i.e. squeezes the saw. This is caused by too large a sharpening angle of the tooth. The angle of sharpening should be reduced by a couple of degrees.

There are too many sawdust left on the board, and they are loose to the touch. Divorce is not enough, it should be increased. Reduce sharpening angle.

Propyl is a wave. If the saw is sharp, then this is due to too small a divorce, it should increase the divorce.

A dull, never-sharpened saw cracks in the hollows of a tooth. This is due to the fact that the blade is not sufficiently bred for the work that they are trying to do, or because the blade continued to be cut after it became dull.

The saw is covered with cracks in the back. This is because the rear stops of the guide rollers are too far from the back of the web.

Sawdust is rolled onto the saw blade. This is due to the fact that the saw is not sufficiently diluted and there is not enough air left in the cut, the saw blade rubs against sawdust, it warms up and wood dust is baked onto the saw. Increase the divorce.

After sharpening, the blade is covered with cracks in the tooth cavities. During the re-sharpening, too much metal was removed at a time, resulting in a fractured tooth surface.

Many problems are created by the fact that the grinding stone is not often and carefully refueled.

Do not forget that no matter what perfect machine you use for sawing wood, it is just a device that pulls a saw through a log. The final result depends on 90% of the correct maintenance of the saw and only 10% of the setup of the machine as a whole.

Do not forget that sawing with an undiluted saw. this is the fastest way to break it.

Tooth setting is an important factor affecting blade performance. Remember that when sharpening the teeth and reducing their height, the wiring also decreases.

Sharpening parameters of a band saw depending on the type of wood being processed (given in the table).

Parameters of a band saw tooth.

In order for the processing of various materials to be carried out correctly, it is necessary to care for and monitor the condition of band saws. For this purpose, machines for sharpening and wiring band saws are used. Timely care will ensure long-term use of tools.

Band saws are a special continuous construction characterized by the presence of cutting elements on one side. This is a cutting element with which woodwork is performed. Most often, band saws are used in a variety of band saw blades. With their help, various parts are cut. With the help of these paintings, a sufficiently high quality of the cut is ensured. All this is provided only if the saw has a good divorce. Also, the tool must be serviced in a timely manner. 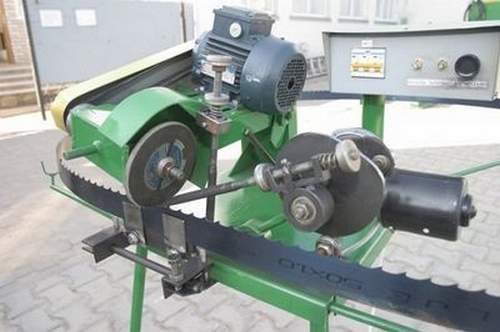 Band saws are made of heavy-duty metal, which ensures not only high quality of the cut, but also the duration of operation of the saw. The teeth have a universal angle, which allows maximum quality cutting of the material.

The geometry of the cutting elements of band saws can be varied, which directly depends on the material intended for sawing. Woodworking machines are most often equipped with special saws, with which you can carry out:

The grinding angle is determined strictly by the tool manufacturer. The rake angle will be as small as possible when using solid wood. Band saws for metal are equipped with saws with various shapes of blades, which directly depends on the metal used for sawing. If it is necessary to carry out cutting of thin-walled metals and at the same time have thin chips, the rake angle of the cut during which will be equal to zero, then standard cutting is used. The angle of sharpening can be varied. It directly depends on the structure of the device.

Tooth, which has a positive rake angle, have those saws that are widely used for sawing metal with thick walls. The step of the blade with which thin metal is sawn is quite small. In order to cut thick-walled metal, it is necessary to use devices that have a large number of paintings. In some cases, the equipment has a variable pitch, which eliminates the resonance effect. Changing the distance between the teeth directly depends on a particular group.

Divorce is the bending of the band saw blades in different directions. This can significantly reduce the friction of the web and prevent it from being clamped. To ensure free movement of the blade on the wall of the material being sawed, its width should be greater than the thickness of this material.

Divorce can have several varieties. Different manufacturers may have different names. Most often may be:

A divorce does not consist in bending the entire canvas, but only a certain part of its top. Parameters are determined strictly by the manufacturers of the tool. Their range is from 0.3 to 0.7 millimeters.

Protecting Divorce consists in bending two canvases. In this case, the third remains in place. Designed for band saws for processing particularly hard material. In shape, every third tooth resembles a trapezoid. The location is the center of the canvas. With its help the most correct direction of a saw tape is carried out.

Woodworking machines are characterized by the universal design of the saw tool. A divorce for processing soft rocks should be characterized by larger dimensions than in equipment for processing hard rocks. But the divorce should not be such that a wedge is located in the center without a cutout. The divorce should be characterized by the same arrangement of all cutting elements. To raise teeth, it is necessary so that the deviation is not more than 0.1 mm. If the saws are not evenly distributed, this will lead to the fact that the band saw equipment in the process will move to the side.

During the operation of the canvas very often there is a gap. This is because its sharpening is poorly carried out. This is explained by the concentration of stress in the profile of the blade, if the sharpening is carried out at a low-quality level. The need for the procedure is determined by the condition of the band saws. If the roughness of the cut surface increases, this leads to a blunting of the tool.

Tool sharpening is carried out using diamond, electrocorundum, elbor disks. Their choice directly depends on the characteristics of the processed material. Sharpening of the blade, the material of production of which is tool steel, is carried out by corundum circles. The procedure for bimetallic tools is carried out correctly if a diamond or elbor wheel is used. How to carry out this procedure will tell the instructions. The most important thing is that the angle does not change in the process.

For sharpening can be used circles of various diameters. The choice of one of them is determined by the parameters of the device. For this purpose, profile, flat, plate, cup circles are most often used. Sharpening is performed correctly if the peripheral speed is 20 to 25 meters per second.

READ  How to Dress a Chain on a Saw

The principle of sharpening tape

If there are notches on the fixture, chipping will be observed at the edge of the workpiece. That is why it is necessary that sharpening is carried out correctly. During this process, it is necessary to work not only with the front, but also with the back of the canvas. Sharpening devices can be carried out in different circles. In this case, the angle of the canvas should be taken into account. If you want to carry out the procedure correctly, then you need to learn it from a specialist.

In order for the band saw equipment to work efficiently, it is necessary not only to select it correctly, but also to sharpen it in a timely manner. To this end, special circles are most often used. This procedure is as simple as possible, which allows it to be easily carried out by a master without relevant experience.

We would like to tell you about typical errors that occur during sharpening and wiring the tape.

1. Such cracks occur due to improper installation of the guide rollers. As a result, the back of the saw rubs against the side of the roller all the time during operation.

2. In this case, the tape quickly dulls. The cause of this kind of error is too much pressure on the grinding wheel during sharpening.

3 and 3a. Visually noticeable, when sharpening the grinding wheel passes an incomplete tooth profile. Error in setting the angle of inclination of the head of the grinding machine or in the profile of the grinding stone if a non-borazon CBN disc is used.

In addition, the reason may lie in the development of an eccentric grinding machine. Cracks appeared in the place that was not pierced.

4 and 4a. Zero angle of attack. the tape rattles during operation, which leads to vibration of the sawing head. In this case, cracks appear on the body of the saw in the place indicated by the circle.

The reason is the incorrect installation of the head of the grinding machine. With a very small (4a) tooth height, the tape starts to worry because the sinuses are not big enough to throw away sawdust, which in this case is very small (dust).

5. The tooth is not sharpened to the end. The reason for this is the non-axial installation of the head of the grinding machine with respect to the clamp. The tape will quickly become dull.

6. Too big tooth alignment. The cutting edge of the tooth (tip) is not equidistant from the edge of the sinus of the tape, which is very dull. Significant jerks of the head appear during the cut.

7. The mainsail of the adjustable tool is set too low, which causes noticeable deviations of the tape below the sinus of the tooth. Such a tape makes a “wave” in the cut, despite the correct readings of an adjustable tool.