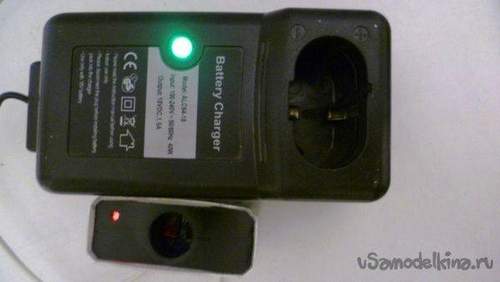 In a previous article, I examined the issue of replacing nickel-cadmium (nickel-manganese) NiСd (NiMn) screwdriver batteries with lithium ones. We need to consider a few rules for charging batteries.

Lithium-ion batteries of size 18650 can mainly be charged up to a voltage of 4.20 V per cell with a tolerance of not more than 50 mV because an increase in voltage can damage the battery structure. The battery charge current can be 0.1 x C to 1 x C (here C-capacity). It is better to select these values ​​by datasheet. I used Samsung INR18650-30Q 3000mAh 15A batteries in the alteration of the screwdriver. We look at the charging datasheet. 1.5A.

It will be most correct to charge lithium batteries in two steps according to the CCCV method (constant current, constant voltage).

The first step is to provide a constant charge current. The current value is 0.2-0.5C. I used a battery with a capacity of 3000 mA / h, which means that the nominal charge current will be 600-1500mA. After charging the can goes at a constant voltage, the current is constantly decreasing.

The battery voltage is maintained between 4.15-4.25V. The battery is charged if the current decreases to 0.05-0.01C. Taking into account the above, we use electronic boards with Aliexpress. CC / CV step-down board with current limit on XL4015E1 or LM2596. A board on the XL4015E1 is preferable, as it is more convenient in the settings.

Enumeration of tools and materials.

Step one. Assembly of the battery charger screwdriver on the adapter.

We already selected the cccv board above. Any power supply with such parameters can be used. the output voltage is at least 18 V (for 4S circuit), current 3 A. In the first example of manufacturing a charger for lithium-ion batteries of a screwdriver, I used a 12 V, 3 A adapter.

Previously, I checked what current it can give a peak to the rated load. I connected a car lamp to the exit and waited half an hour. It produces 1.9 A freely without overload. He also measured the temperature on the radiator of the transistor.40 ° C. It is quite normal mode.

But in this case there is not enough voltage. This can be easily fixed with just one penny radio component-variable resistor (potentiometer) at 10-20 kOhm. Consider a typical adapter circuit.

The circuit has a controlled zener diode TL431, it is located in the feedback circuit. Its task is to maintain a stable output voltage in accordance with the load. Through a divider of two resistors, it is connected to the positive output of the adapter. We need to solder to the resistor (or solder it completely and solder it in its place, then the voltage will be regulated in the lower direction) which is connected to terminal 1 of the TL431 zener diode and to the negative bus a variable resistor. We rotate the axis of the potentiometer and set the desired voltage. In my case, I set 18 V (a small margin of 16.8 V to drop on the CC / CV board). If you have the voltage indicated on the cases of electrolytic capacitors standing at the output of the circuit, there will be more new voltage, they can explode. Then you need to replace them with a margin of 30% voltage.

Next, we connect a charge management board to the adapter. We set the tuning resistor on the board to a voltage of 16.8 V. With the other tuning resistor we set the current to 1.5 A, pre-connect the tester in ammeter mode to the output of the board. Now you can connect the lithium-ion screwdriver assembly. Charging went fine, the current at the end of the charge fell to a minimum, the battery was charged. The temperature on the adapter was between 40-43 ° C, which is quite normal. In the future, it is possible to drill holes in the adapter housing to improve ventilation (especially in the summer).

Second step. Assembly of the battery charger circuit of a screwdriver battery on a standard charger.

This was decided simply by soldering the wires to the CC / CV board to the output wires (red plus, black minus).
The open circuit voltage at the standard charger output was 27 V, this is quite suitable for our charging board. Further, everything is the same as with the adapter.

Here we see the end of charging by a change in the color of the LED glow (switched from red to green).

I placed the CC / CV board itself in a suitable plastic box, leading the wires out.

If you have a standard charger on the transformer, you can connect the CC / CV board after the rectifier diode bridge.

The adapter’s alteration method is just for beginners and can be useful for other purposes, as a result we get a budget unit for powering various devices.

details in the video:

I wish you all health and success in life and work!

Receive in the mail a selection of new homemade products. No spam, just good ideas!