Any person who owns a cottage or land is well aware of the problems of combating excess vegetation. Now a trimmer has come to the rescue, which has successfully replaced the usual braid in this field. This unit is very convenient to use, but it, like any mechanism, tends to fail due to difficult working conditions or incorrect operation. Situations are quite common when the trimmer does not gain momentum. To understand this problem, you need to understand some aspects related to the operation of the device.

Features of the trimmer

All trimmers are classified by type of power: gasoline or electricity (from the mains or battery). It should be noted that gas mowers in many respects surpass their electric and battery counterparts. Despite the fact that they all perform similar functions, the difference in performance, maneuverability and efficiency is very noticeable. However, the general principle of operation of all types of hand-held mowers is almost the same – the devices are equipped with engines (two- or four-stroke ICEs or electric motors) that drive the cutting unit (reel with fishing line or metal disk). All elements are fixed on a straight or curved rod, including a handle for controlling the trimmer, on which the main buttons are located. 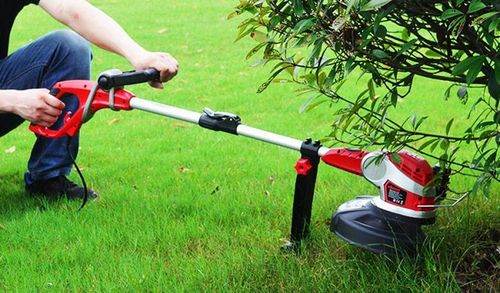 Since the problem of low revs is more characteristic of the gasoline versions of trimmers, more attention will be paid to them. So, the lawn mowing is very comfortable in operation and unpretentious in maintenance. Moreover, most of its malfunctions are caused by the user’s ignorance of the elementary things that are described in the instructions. Therefore, before starting operation of the unit, it is necessary to carefully study the manufacturer’s manual. In particular, in order to start the engine, it is necessary to do the following sequential actions:

If the lawn mowing is started, but stalled, you need to put the air damper in the middle position and try again. When the engine is working, you need to slow down the gas and open the air damper, since the trimmer only works on the suction.

If users complain about a trimmer that is not gaining momentum, this means that at idle it works fine, and when you press the gas it does not develop the necessary power. This can happen as a result. Long downtime of the device without activity. These problems are typical for gasoline vehicles, including Husqvarna 128r, Stihl FS 38 and Hitachi of various modifications.

When working with the trimmer, you need to monitor its behavior all the time – a drop in speed and unusual noise signal a malfunction in the unit. Sometimes you give gas, and the trimmer floats. In such cases, work immediately needs to be suspended, allowed to cool down and proceed with the search for possible problems. They can be of a different nature, both the technological plan, and external factors associated with the conditions and features of the operation of the device.

Several factors that are not related to its breakdown have an effect on reducing the speed of lawn mowing:

READ  How to Choose the Right Trimmer Fishing Line

Moreover, in the second and third cases, carbon deposits in the combustion chamber, and elements of the carburetor become clogged.

Technical problems of lawn mowers mainly occur in the fuel supply and ignition systems. You can deal with them yourself.

Diagnostics and troubleshooting of petrol engines

Before proceeding with the repair of a particular unit (part), it is necessary to determine the nature of the malfunction. Step-by-step diagnostics and troubleshooting – further.

This mechanism is an important component of the gas trimmer. In order for the carburetor to work properly, several conditions must be observed:

In the event of a breakdown of this unit, it is possible to repair it yourself, but only if you have certain knowledge.

One of the reasons for carb carb malfunctioning is relaxed cable. To fix the problem, you first need to disassemble the entire assembly, and then, thoroughly rinsing all the parts, grease and tighten the cable, but not very much so as not to stretch.

In case of problems with a candle, sometimes it is enough to dry it or sand it with sandpaper and put it back in place, setting the gap correctly – it should be 1 mm. If the candle is very covered with soot, it is better to replace it with a new one. With the optimal operating mode of the trimmer, the candles do not so often fail.

Clogging air filter ─ Another reason for the unreliable operation of the device. To check the involvement of this element in the malfunction, you need to start a lawn mowing without it. A dirty filter can be washed in gasoline, dried or replaced with a new one.

Clogged fuel filter does not pass fuel into the cylinder, and the engine stalls at full throttle due to an elementary lack of gasoline. This element is located inside the tank on the intake hose. To fix the problem, instead of the old filter, put on a new hose or rinse thoroughly the one that was removed.

The engine is the most important part of any unit. The causes of engine failure are several:

All this leads to the fact that the engine either does not start or stalls.

For the trouble-free operation of the gas trimmer, the functioning of the fuel system is of great importance. Gasoline passes through all its components and parts, so they should be cleaned regularly. In addition, only high-quality fuel must be used. For the preparation of a combustible mixture in a two-stroke engine, motor automotive oil cannot be used, since it has insufficient qualities.

READ  The trimmer stalls after a minute of work

Diagnosis and troubleshooting of electric motors

Trimmer failures can be as follows:

To deal with these breakdowns, you do not need to disassemble the entire device.

With serious engine trouble will have to disassemble it. To do this, unscrew a few screws. Having access to the details of the motor, you need to carry out such actions:

Problems with low revs are common for cheap trimmers. However, with improper maintenance, manual mowers such as Huter, Patriot 3055, and Echo also suffer from this.

If the device is under warranty, at the first sign of malfunctioning, it can be safely taken to a specialized workshop. Repair will be done free of charge, regardless of the nature of the damage, if it happened through no fault of the owner. In the event of engine breakdowns, it is better for a person who is not knowledgeable in technology to contact a specialist immediately. In any case, the severity of problems with the unit is determined by the user.

Summarize. Both gasoline and electric trimmers are designed for many years of reliable operation. Most of the problems described above are due to the lack of attention of the owner to his assistant. Subject to strict adherence to requirements from the manufacturer and regular maintenance, the hand mower will operate rhythmically and without interruption.

The best electric and gas trimmers

Huter GET-400 trimmer on Yandex Market

Makita UR3502 trimmer on Yandex Market

A spit that has a gasoline drive is a useful thing for owners of personal plots, lawns, and when the trimmer suddenly stalls, the work to clean the area from grass stops. The device itself is a rather complex mechanism, so there are many different reasons for its breakdowns. The most common problems are contained in the instruction manual. To know the reasons why the trimmer stalls, you should be able to effectively repair the device yourself.

Problems with the lawn mowing due to the fact that this device does not start are classified in a certain way by service technicians. They highlight malfunctions with the following nodes of the mechanism:

When you press the gas

If the lawn mowing stops when you press the gas, then the reasons may be as follows.

READ  How to Fix a Fishing Line to a Stihl Trimmer

If the problem is related to the carburetor assembly, then it can be recognized by the appearance of vibrations of the lawn mowers.. When the hose bursts or the cable is stretched, these components are replaced.

When the braid stalls at high speeds, this is due to the following problems:

Carburetor adjust, Based on the operating instructions for the trimmer. To adjust, it is often enough to loosen the tightening of its body. If there are problematic moments with the circulation of the fuel mixture, then it can gradually enter the carburetor. After its development, the engine stalls at high speeds.

At idle, common causes of trimmer stopping are the following:

Right after wound up

The unit may stall immediately after start-up, if the carburettor is misregulated or has been incorrectly configured, this causes uneven fuel supply. The result of this is that the device begins to vibrate distinctly. To troubleshoot, the carburetor is reconfigured according to the instructions for the mechanism.

Also the engine stops when it happens valve clogging, supplying fuel. In such cases, it is simple enough to clean it. If the lawn mower first worked, but then immediately died out, then perhaps the fuel enters the carburetor assembly with some difficulty. The easing of the valve helps to solve the problem, which ensures free circulation of the mixture in the system.

A stop can also be called. Air suction in the presence of mechanical damage to the hose (holes, cracks) producing fuel. In this case, add revolutions to the drive in order to quickly expel air bubbles from the system.

Lawn mowing often stops when heated. At the same time, it starts, works “jerkily” and gradually stops. This process occurs when gas in the carburetor boils or a shutter in it is installed rotary, and not disk type. In the latter case, the item is changed.

It happens that the trimmer heats up if ignition wire damaged either a coil. In order for the device to start working normally, replace parts.

It happens that the unit stalls when the air damper is opened, normally idling. This is due to air leaks in the system caused by the presence of fuel hose cracks or problems with oil seals. Also, the carburetor dosing system may malfunction, while the lawn mowing will stop after opening the damper.

All possible reasons that the lawn mower stalls, and methods for their elimination are contained in the next video

There are many reasons for stopping the lawn mowing, but the most common problems in operation are related to its carburetor. They can occur in any cases. The most problematic option is when a serious breakdown occurs, and you will need to purchase new parts or change the lawn mower.