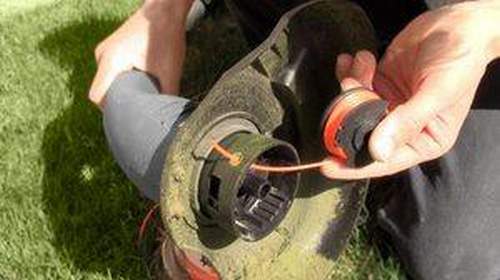 Any garden owner knows how quickly weeds can fill the area. To defeat them without excessive efforts will help the trimmer. This incredibly useful device is an indispensable tool for trimming and mowing grass.

It’s no secret that a conventional lawn mower can be used far from everywhere. In contrast, the trimmer can handle even very complex areas. This is especially true for those tools in which the cutting element is not a knife, but a fishing line.

Features of the use of trimmers

The trimmer mowing grass with a fishing line can be used close to: houses and other buildings, fences and hedges, trees and shrubs, beds and flower beds, row spacing in the garden.

Such a convenient, and most importantly, effective device, such as a trimmer, exists in several variations:

As the names suggest, the types of trimmer are noticeably different from one another. But regardless of the type of tool, it the cutting element may be a fishing line. Of course, the line tucked into the reel of the trimmer is not infinite. And sooner or later it will be required to replace it with a new one.

The consumption of fishing line depends on on frequency of use device and scope of work performed. The more grass is cut and the more often it is trimmed with a trimmer, the more actively the line is consumed in it. And, accordingly, the faster it will end. In this regard, the question arises: how to fill the fishing line into the trimmer coil?

Not everyone knows the answer to this question. But winding fishing line on a reel plays an important role in the trimmer. In order for the device to function normally, it is very important to wind a new line onto the reel correctly. How to change the line on the trimmer, and will be discussed in this article.

Which fishing line to choose

Before you stock up on this material for refueling in the trimmer, you need to make a choice. After all, the usual so-called round fishing line is far from the only existing species. How to choose the most suitable? First you need to determine the working conditions.

Type selection. A fishing line with a circular cross section is the most common. It will fit any coil with the rarest exceptions. This type of consumable is suitable for mowing fresh, juicy grass. But mowing the so-called dead wood, this species may no longer be able to cope. It is pointless to mention attempts to mow shrubs with this thread.

Besides the usual type, there are others having sharp edges. Usually they are made with an “asterisk” or “square”. The presence of sharp edges is the main feature and key difference of these threads.

It is because of this peculiarity that the threads of such species are able to mow dry weeds. But the pointed threads are not without flaws, the main of which can be called quick wear and strength noticeably inferior to the round type.

In addition to the types of woods already mentioned, there are also interesting and common varieties. Especially among them can be noted fishing lines, inside of which stretched metal wire. Threads of this type are often used in tools running on gasoline and having an engine more powerful than one and a half horsepower.

Threads with a metal core are like with round section and with sharp edges. Regardless of the type of cross-section, such threads are the best suited for overcoming mowing plants. Threads belonging to this type easily mow not only dry grass, but even small shrubs.

In addition, special attention should be paid to the thickness of the consumable. For mowing young grass, a thread with a diameter within one and a half millimeters is suitable. The larger the diameter of the thread, the drier and coarser weeds it can overpower.

When choosing a fishing line by thickness there is one “but”. It is important not only to evaluate the capabilities of the material, but also to take into account the features of the trimmer. Necessary take a look at the user manual, which is attached to the tool and find information on the requirements for the cutting element.

Using the wrong thread may cause the tool to malfunction. Using too thick a thread will overload the motor of the device. And the use of too thin thread at times will increase the wear of the twisting mechanism.

That is why it is necessary to approach the choice of consumables no less responsibly than to refuel it in the trimmer. When a suitable fishing line is found and acquired, you can begin to consider ways to wind it on a reel.

How to reel a fishing line on a trimmer reel

At first glance, refueling a fishing line into a tool reel is not an easy task. But it is enough to carefully study this process. and in the future, all necessary actions will be carried out without any difficulties.

To learn how to refill a fishing line in a trimmer, read this guide. The step-by-step instruction below takes into account the features of the coils of different types of trimmers, therefore applicable to any instrument.

So, the procedure is as follows.

See also  How to Start a Trimmer Gasoline Video

At this point, actually begins the key stage, which this article is devoted to.

The first way to wind the line

The right amount of fishing line is cut off. Now you need to carefully inspect the bobbin to understand what type it belongs to. It depends on how the line is to be wound on it.

There are two types of bobbins. In general, they are slightly different from each other. Regardless of the type, the coil is divided into two compartments. upper and lower. In the first type, the dividing face does not close into the ring and has a recess.

In the second type, it is solid, but near it on the sides on both sides there are small through holes. The method of winding the thread needs to be studied depending on which of the above types the coil belongs.

The process is completed. The line is tucked into a reel. The trimmer is ready for further work.

The subsequent steps for this type of coil are exactly the same as those described for the previous type in steps five through nine.

This is how the fishing line in the trimmer coil changes. Nothing no complicated in the process. And after a few refueling completed, all actions will reach automatism.

To visually study the process described above, you can turn to the Internet for help. The popular YouTube portal has many different videos with a demonstration of winding fishing line on a trim reel.