What kind of oil is needed for a trimmer

Gas trimmers are some of the most popular grass mowing devices. They are easy to use, mobile, allow a person not to depend on the outlet and show excellent results in their places of use. But for the stable operation of the gas trimmer, quality supplies are needed. In particular, we are talking about gasoline and oil. It is about the last component that we will discuss in this article.

Engine oil is a special mixture consisting of a solvent and additives that reduce friction. They form a certain viscosity and do not allow the composition to thicken when the temperature is lowered. Usually, oils are specially painted in various colors: green, red or blue. This allows them not to be confused. 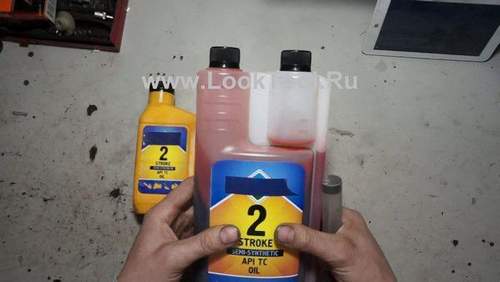 Keep in mind that they may vary in composition, so oil for gas trimmers will be labeled “for gardening equipment”. In addition, it may still differ in labeling: “2T” or “4T”. The first is a two-stroke oil that is poured into the corresponding engine. And the second is intended for pouring into the crankcase.

In addition, you should be aware that under no circumstances should mineral and synthetic oils be mixed due to the fact that they have a different base.

High-quality oil, which can be poured into a gas trimmer, must meet a number of requirements and standards in order to ensure reliable operation of the device and its performance. Oil should:

As already mentioned, two-stroke engine oil will be different from four-stroke formulations. It has higher power, which is why fuel for it is obtained by mixing a certain amount of gasoline and oil. For each lawn mowing ratio will be different. You can find out its value in the instructions for the device. These proportions must be observed with maximum accuracy. When adding additives, the type of motor must be considered.

See also  What gasoline to fill in the Huter trimmer

If mineral oils are used, the mixing should take place somewhere in the ratio of 1: 25, 30 or 35, depending on the type. If we are talking about a synthetic analogue, then the proportion will be 1: 50 or to 80. That is, a certain amount of oil dissolves in the volume of gasoline.

The oil that is poured into the motor may vary in the method of preparation. According to this criterion, it happens:

Oil for brushcutters refers to compositions intended for use in air-cooled engines that have a combustion chamber volume of 50-200 cubic centimeters. In addition, any two-stroke oil can differ from analogues in additives, which give it certain additional characteristics. They are of the following types.

Video: What kind of oil is needed for a trimmer

Two-stroke oil from various manufacturers may differ in the combination of additives used, which means that their properties will differ.

Recently, when purchasing oil for dilution with gasoline, users very often encounter the fact that special letter abbreviations are applied to canisters. These designations are performed as part of the API classification. Consider what types of oils exist in accordance with it.

See also  How to properly start the Stihl trimmer

But in addition to this classification, other FA-FD type letters are often found. It should be said that the API is an American standard that is applied in Europe. But there is a mismatch between European smoke emission standards and American. For this reason, additional lettering should also be taken into account.

In addition, there are two more categories of oil:

In the first case, this will mean that it is necessary to carry out independent mixing, which does not require shaking, and in the second case, you will need to do it.

Now let’s try to understand how to choose high-quality oil for a trimmer that runs on gasoline. The main feature that you need to pay attention to is the alkaline number. This moment eliminates the oxidation of parts in which friction is observed, and decelerates their deformation as much as possible. The more this compound is used, the faster it loses alkalinity and becomes more oxidized. The optimal indicator of acidity (PH) is a value of not less than 8-9 units.

See also  How can I replace the grease in the trimmer

The second important factor, which also has a major impact on the operation of the gas trimmer, is the viscosity of the oil. This characteristic determines the possibility of using the device at various temperatures. Summer brands of oils begin to thicken already with a minimum decrease in temperature.

But given that such trimmers are usually used in the fall and spring, it is best to use just the oil with summer markings.

The third point, the importance of which should not be minimized, is the flash point. This indicator should not be less than 225 degrees. Otherwise, the composition will burn out very quickly and the load on the piston group will begin to increase, which will cause its accelerated wear. In addition, oil for a 4-stroke engine is not suitable for a 2-stroke. Namely, the latter type of motors is used in the vast majority of mowers.

If we talk about manufacturers, then you can make a small rating, which will allow you to navigate in the compositions offered by various manufacturers. For instance, stihl company offers high-quality synthetic and mineral oils that have already established themselves as an excellent solution at any time of the year.

Considered very good Shell Helix Ultra Oil. Experts note its high characteristics and excellent alkalinity and viscosity. In addition, products of brands such as Oleo-Mac, Motul, Hammerflex, Echo. If we talk about products of domestic brands, then you should pay attention to Lukoil oil. Its price is several times lower than its foreign counterparts, but at the same time it has high quality and good technical characteristics.

In general, an ideal solution would be a synthetic or semi-synthetic oil, labeled TV or TA.