What You Can Do From An Angle Grinder Without a Gearbox 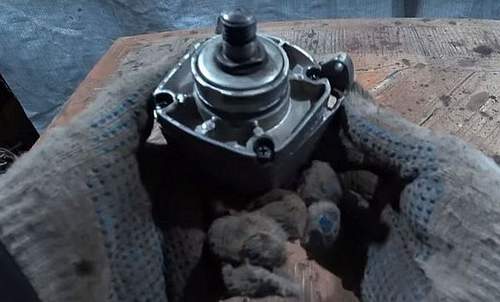 angle grinder consists of electrical and mechanical parts. During operation electric drive may burn out, when gearbox is in good condition. The opposite is possible. gear parts (cracks appeared on the case, gears are worn out, bearing units are out of order) have critical damage, with a working electrical part, an angle grinder. Some craftsmen do not write off the entire angle grinder in such cases as scrap, but try find application for its serviceable part. The most inventive after purchasing a new angle grinder find application of the whole previously operated angle grinder in other mechanisms where an electric drive and a gear transmission are required.

What can be done with angle grinder without gear

angle grinder without gearbox is enough powerful electric drive with a value rarely less than 0.5 kW. Such a device can use in homemade machines for the production of various types of machining (stripping, cutting, grinding and others).

Important: Do not discard the emergency gearbox, but modify it by removing all unnecessary parts, for example, on a lathe, leaving only a part of the housing with a bearing assembly. This design of the drive shaft will maintain its rigidity during load transfer. Next, instead of the drive gear, angle grinder fixed to a suitable diameter drive pulley and with the help of a belt drive, torque is transmitted to another driven pulley sitting on the working shaft. The working tool is installed according to the nature of the work performed.

Variant of using high revolutions of the electric drive angle grinder effective when engraving. Here, no intermediate mechanisms are required to set the working revolutions, but it is only necessary to solve the problem of how to connect the flexible shaft used in the engraving technology to the electric drive shaft. To save a part of the gear case with the bearing installed in it (! The replacement process of which is presented in a separate article) is an important condition for the design to work.

DIY, what you can do with your own hands, where to adapt the gearbox

A significant number of mechanisms operate at the number of revolutions of the shaft after the reducer angular grinder. Therefore, the applications of the angle grinder for the operation of other devices there are more. Together with non-standard methods of using the whole angle grinder for homemade products, masters of technical creativity interesting compositions are created. Some are presented by the authors in specially filmed videos.

The owners of summer cottages and household plots will be interested in the following video. Many of them use trimmers to properly maintain the area. The possibility of failure of an electric motor installed on such a device is not ruled out. The author suggests using an angle grinder instead. For what bracket is made from waste materials that are mounted in place of a burned-out engine. In addition to the bracket should make adapter from spindle angle grinder to the flexible shafts of the trimmer. An angle grinder is attached to the installed structure and the trimmer is ready to mow the overgrown grass.

The number of revolutions of such an upgraded design about 10,000 rpm. At such speeds, grass mowing is quite effective. It is possible that the use of grinders of a minimum range of capacities to reduce the weight and overall characteristics of the trimmer will lead to overheating of the grinders during operation. Should monitor gearbox temperature angle grinder and take breaks if necessary.

The owners of the land will benefit from the experience of the author of the next video. On the cultivator out of order gasoline engine internal combustion. In his place the author came up with a mount for the angle grinder and connected the gear spindle to the angle grinder with the cultivator gearbox. The rotational angle grinder is definitely higher than that of a gasoline engine. However, the author’s advertised productivity gains are unlikely to happen. The problem of overheating of the commutator motor will remain and frequent stops, as protection against it, will remain. Although for owners of relatively small areas, the use of such a cultivator will be effective.

Видео: What You Can Do From An Angle Grinder Without a Gearbox

As one of the structural elements created by the author in the next video drilling machine is the gear from the angle grinder (! how to disassemble the gear you will learn here). Working in tandem with the electric motor from the washing machine makes it possible obtaining drill revolutions in accordance with the required technological conditions processing materials. Rotor angle grinder cut to length, necessary for reliable fixing of the rubber sleeve, acting as an elastic coupling. The other end of the sleeve is mounted on a shaft electric motor. Mounting is done using clamps.

Machine has several degrees of freedom. In addition to lifting up / down with the handle and spring-loaded suspensions, the lever system allows change the location of the cutting tool in the horizontal plane. It is advisable to use it as a tabletop device for making holes in metal and wood parts.

READ  At What Angle To Sharpen A Chainsaw Chain

Plasma cutter is used to cut round workpieces. The frame structure, as shown in the next video, plays the role of a device for fixing and adjusting the diameter of the resulting workpieces. "Chip" in the use of gear reducer angle grinder is that it conical pair changes direction of rotation by 90 °. Thus, a manual drive creates rotation in the horizontal direction, and the gearbox translates it in the vertical direction and ensures the correct operation of the plasma torch.

If you are tired of pedaling a bicycle. idea driven by angle grinder in the next video. Here, the author installed an angle grinder on the frame, and installed a drive sprocket on the spindle for chain transmission to the driven sprocket on the rear wheel. The power source is a battery, which works in tandem with an inverter voltage converter from 12 V to 220 V. The bike handle is mounted with a thrust for turning on the electric drive through an inverter converter that controls the speed at partial load modes of the bicycle. The original solution to stabilize the preservation of the operating mode of the angle grinder using an elastic element in the form of an elastic band requires a more detailed refinement of this node. In stationary mode, this design is functional, but in “combat” conditions, many improvements will be required, especially in terms of adjustment in transient modes.

Reducer gear ratio angle grinder allows the propeller to give the necessary speed for efficient operation. Electric motors from many household devices are suitable for the manufacture of a homemade outboard motor. In the following video, an electric motor powered by a car battery through a long shaft in the pipe and a gearbox connected to it transmits rotation to the propeller.

Reducer angle grinder is not intended to work in the water element. It should be mandatory complete it. First, make a seal at the spindle exit from the gearbox, and secondly, drown out the place where it is necessary to remove the locking mechanism of the angle grinder from turning when changing the tool. Such measures do not guarantee 100% water does not get into the gearbox. However, more frequent grease change will make it possible to work on the gearbox angle grinder as a unit of the outboard motor for a sufficiently long time.

READ  What does an angle grinder key look like?

The following video shows one of the options for sliding gate drive based on gearbox from a burned-out angle grinder and an old screwdriver. The drive is equipped with an automatic device for controlling the opening / closing of gates. The chain drive with the drive sprocket on the gearbox spindle works at high revs for the gate control function, therefore creates increased noise during operation.

On a chainsaw, how to use angle grinder as a nozzle and other options

Variety of possibilities for angle grinders perform technological operations (cutting, grinding, grinding, polishing and others) are reduced to zero in the absence of power supply. angle grinder performs its functions only in the presence of electricity. However, in street conditions there is a device in the form of a chainsaw, on which angle grinders can be installed. Why should perform the following steps with a chainsaw:

The following video shows the installation of a angle grinder with a cutting disc and the tools used for this.

For those obsessed with technical creativity and those who want to make their young children or grandchildren happy the idea of ​​creating an electric scooter in the next video. To do this, you will need not currently used cordless angle grinder, typical mower wheel drive gearbox and materials for making the scooter itself. Of course, the main success of this homemade the master has universal skills as a locksmith, turner, welder and many others. By the way, the angle grinder can be easily removed and used for its intended purpose.