Why Angle Grinder Spins The Other Side

Typically, a disk rotates counterclockwise (when viewed from the side of the disk), sparks fly forward, but recently, in a pipe-selling warehouse, I saw that a disk rotates in the opposite direction at the cutter, sparks fly under your feet. He has to cut a lot and every day. Therefore, the question arose. how right?

Correctly safe when sparks fly at a worker working with an angle grinder, to his feet. Why? When clamping an angle grinder, it flies forward. Without harm. (Sparks fly, trousers burn, it is not taken into account). When flipping, sparks fly forward. Usually when cutting, the right elbow rests on the right lower leg. And when clamping, the angle grinder flies over the lower leg. It’s better not to describe the consequences, I think it’s clear. Minimum month of hospital. The bulk of professionals cut "on the pants.

That’s exactly right (as you saw). when the sparks fly to the cutter, and the traction force is centrifugal force "carries away" angle grinder from the cutter, not on it. What you saw, sparks flying to the cutter, is the right choice to set the position of the angle grinder, and it is to install the body, handle and casing, because the direction of rotation of the shaft does not change. You can swap the handle (depending on the angle grinder model it can be installed in three or two positions by 180 degrees and 180 degrees with a step of 90) You can rotate the casing within its adjustment. But not all angle grinders allow "twist" cover as you like. Some can change the position of the gearbox.

Angle grinder (colloquially "Angle Grinder") a rather dangerous tool, although very effective in many locksmith operations.

Having experience working with all running angle grinders, from the 115th to the 230th (this is the diameter of the wheel, and, accordingly, the power of the unit), I can say that devices up to the 150th disk can still be confidently held, as in the case of not predicted "recoil" then above this diameter, it is very difficult, and fraught with serious injuries (!) That’s why you should not tempt fate, and regardless of the power of the unit, and the diameter of the disk, direct its rotation always from you (if you look at its upper part) sparks even fly to your feet, but this is a 100% guarantee that you will hold the angle grinder in case of snack and throwing.

Again, from personal experience, I can conclude that the arm muscles are much more difficult to reflexively respond to extension than to flexion (IMHO!) "Pulling off" a cutter is less dangerous than rolling on it. In extreme cases, the angle grinder will simply pop out of your hands rushing away from you and not at you. Of course, you release the latch and it just falls without causing you any harm.

Video: Why Angle Grinder Spins The Other Side

Well, let the sparks fly, only always saw yourself. That’s why you need a good suit (pants and a suit made of thick fabric) From flying sparks, you can burn your pants (just that. it’s okay), but from an angle grinder flying at you. maybe all!

I came to this conviction solely from my own experience, and this experience was not without some "losses". However, it is confirmed by others.

I have a small DWT angle grinder, in the standard version the disc is on the right, rotates counterclockwise, sparks fly forward. But it’s absolutely inconvenient for me to work like that, since I don’t see a product or a circle.

I turned the gearbox over so that the disk was visible, but sparks fly at me. it’s not nice. The question is, is it possible to somehow make the disk rotate clockwise? Change wires from brushes? And another question is how safe it is. In principle, the disks are light, they will not cause serious injuries, except that they will knock out the eyes, if without glasses.

Who knows. tell me:
I took from a friend an angle grinder (Interskol). I insert a circle, put a gasket under the nut. As expected, tighten the nut. I turn on. And. The nut immediately begins to unscrew. Especially fast. after I turn off the angle grinder. What is the reason for this?

Probably spinning in the wrong direction.

luchnik78 wrote:
The nut immediately begins to unscrew. Especially fast. after I turn off the angle grinder. What is the reason for this? 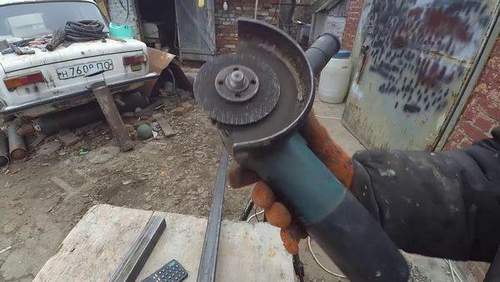 Well, what can I advise. tighten or remove the gasket.

Probably spinning in the wrong direction.

How could this happen and how to fix it?

luchnik78 wrote:
angle grinder. during rotation, the clamping nut is unscrewed Why.

I didn’t unscrew it! the grinders went through my hands a lot, I work 125, while rotating the nut should unscrew judging by the thread (I work this way, it’s so convenient for me), and it didn’t unscrew, tighten it better, or put a new nut!

when the angle grinder brakes, the disk, by inertia, unscrews the nut. Place the gasket not under the nut, but under the disk, or remove it altogether.

maybe she has been repaired and accidentally switched brushes, now rotates the other way

Have you tried to ask the owner?

eatherly wrote:
maybe she has been repaired and accidentally switched brushes, now rotates the other way

then on the contrary, the nut would self-tighten when stopped.

when the angle grinder brakes, the disk, by inertia, unscrews the nut. Place the gasket not under the nut, but under the disk, or remove it altogether.

And put a new nut, and experimented with gaskets. the effect is the same. I think. maybe the disk really rotates in the other direction. The owner said his disk wedged and he had to remove the head with the shaft on which the bevel gear. He clamped it in a vice and unscrewed the nut with a gas wrench. Mozh what confused. He advised me how to insert a new disk, give it a load right away and then the nut does not loosen, but I don’t like something. you can forget and cause injury