Why You Can’t Cut the Apple Tree

Apple trees can decorate any garden. These trees can be planted near the house, as they carry only positive energy. But there are signs according to which the owner should not independently cut or uproot the apple tree.

Why you can’t cut an apple tree in your garden

Esotericists consider the apple tree a tree with very powerful positive energy. She gives people a charge of vivacity, good mood. Being in the apple orchard is a great pleasure. In the old days it was believed that a person who planted this tree near a house would find happiness.

Unfortunately, apple trees are not eternal. Old, diseased trees cease to bear fruit, do not look very attractive, so the question arises of the need to cut them. But there is a sign according to which the owner should not delete the tree on his own. Neglecting this rule can lead to illness of a person or members of his family, trouble or even death.

To prevent luck from leaving the house, uprooting or sawing off, you can chop an apple tree only after it begins to dry. If the tree has become less fruitful, damaged by pests or lost its decorative appearance. this is not a reason to get rid of it. You can cut a drying apple tree, but an outsider must do this. You can invite a neighbor or relative, hire a worker. The main thing is that those who live in the house or work in a summer cottage should not cut down the tree. 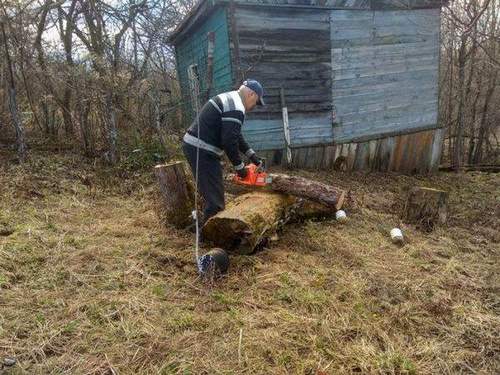 Sawing an apple tree in your garden is a bad omen

It has long been believed that you can not chop the top of the apple tree, as this can lead to loss of health. Cut off living branches. lose happiness in family life. People believed that the intentional spoilage of young apple trees could lead to blindness.

Video: Why You Can’t Cut the Apple Tree

All the old signs in the modern world have lost their relevance. Such beliefs originated among the Slavs, and at that time it was customary to associate your life with the life of trees. When a person was born, relatives planted a tree in honor of the newborn. Perhaps, for this reason, chopping apple trees in your own garden was considered a bad omen.

Other signs and traditions

There are many other signs and traditions regarding sawing trees. For example, fruit trees cannot be uprooted and sawed at the new moon. This sign has a rational explanation. In certain phases of the moon, the movement of sap in the trees increases. Having cut the apple tree in the new moon, later it will have to be dried for a very long time in order to use it for firewood.

See also  The screwdriver crackles under load and does not twist

In Germany, for a wedding, the newlyweds not only beat the dishes, but they must also cut the log. This tradition has a deep meaning. The bride and groom need to understand that building a strong family is a lot of work. For everything to work out, you need to support each other and act together. You can start training already at the wedding. It will be possible to cut the log only if the newlyweds join forces.

There is such a sign, in addition to the apple tree, there are several more trees that also cannot be cut. The same goes for willow. if it grows with someone, it is better to invite someone and pay for the cabin, as it is believed that this person will soon go to the forefathers and this is not verified by isolated cases.

Actually, the apple trees are cut. A bad omen. Apple trees have been growing for decades, you won’t get them back in a couple of years, and gradual pruning can achieve the desired result.

Sawing an apple tree in your own garden is a bad omen. This ancient belief has already lost relevance, but many people still take it into service. According to tradition, only a dried tree can be uprooted and sawed off, and not one that has become less fruitful.