Disassembly And Assembly Of The Trimmer Carburetor

Build your Home! This article is about DIY brushcutter carburetor repair, we will show you how easy it is! 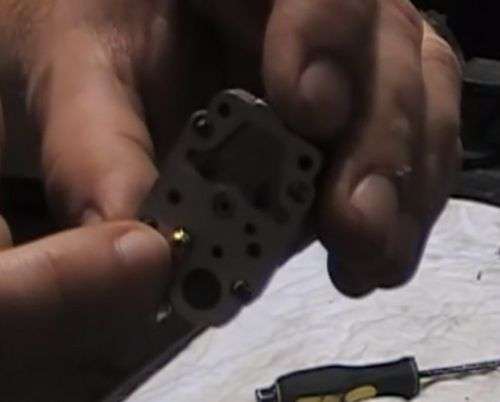 Carefully inspect and clean the inner passages of the top of the carburetor (cover). Trace the channels along their entire length and, pouring the solvent into one hole, make sure that the solvent flows out of the outlet.

Screw all jets into place properly, but do not overtighten. An untwisted jet can cause a lean or rich mixture.

Before installing new gaskets, clean all joint surfaces from traces of old ones. Do not use any type of sealant when assembling the carburetor and installing it on the engine. Often times a carburetor with channels clogged with sealant is easier to throw away and replace with a new one. Make sure all fittings and hoses are routed correctly.

Install the claim device to the carburetor body with the required new gaskets and seals. The throttle valve of the secondary chamber must be fully closed. Its adjusting screw (stop) usually cannot be adjusted. However, if necessary, adjust this screw so that the speaker is covered as much as possible, but does not get stuck in the closed position. If there is a measuring template, the damper can be adjusted according to it.

If the carburetor is equipped with an autonomous idle system, the primary throttle adjusting (stop) screw is also usually left untouched. However, if necessary, its position can be adjusted so that the damper is as close as possible, but does not get stuck in this position. If there is a measuring template, the angle is adjusted with it.

Install all diaphragms, their bodies and covers, and tighten the mounting screws. Make sure all springs are correctly installed. Wrap all jets in place (do not mix up). Install the solenoid valve (if equipped). Install the accelerator pump sprayer with valve.

Install the autonomous idle adjustment screws. Screw them in carefully until they stop, then back off three full turns. This will ensure they are approximately correctly set and allow the engine to start. Please note that all threads are very delicate in a carburetor made of aluminum alloy, do not mix up the threads when installing the screws. Damage to the threads will require replacing the carburetor.

Clean or replace the inlet filter, then install the inlet.
Place a new float chamber gasket on the carburetor cover (upper body).

Install a new needle valve using a new sealing washer. Do not overtighten the threads.

See also  Which heads are suitable for the trimmer

Install the carburetor cover and secure with the retaining screws. Tighten the screws gradually and evenly to avoid bending surfaces. If so, secure the ground wire securely.

Connect the trigger vacuum hose (if equipped). Connect the choke control cable and check its operation. Adjust the valve travel at the starting speed.

Install the carburetor to the engine.

Always adjust the idle speed and mixture after assembling / installing the carburetor, with the engine warm and, if possible, using a gas analyzer.

Disassembly and assembly of the carburetor

When disassembling the carburetor, to screw out the fuel jets of the main metering systems and air jets of the idle systems, in order to avoid damage to the threads of the channels and slot of the jets, use the special screwdrivers shown in the figure and in the table.

Table. The main dimensions of special screwdrivers for disassembling the K-126P carburetor

See also  How to Start a Trot Trimmer Correctly

The secondary chamber throttle shaft is removed in the same way. Subsequent installation of throttle valves with axles is carried out in the reverse order. After installing and fixing the throttle valves on their axles, the screws must be reamed.

All disassembled carburetor parts must be thoroughly rinsed in gasoline.

If there are abundant resinous deposits on the parts, it is allowed to wash them with acetone or a solvent for nitro paints.

It is completely unacceptable to use a wire, however soft, to clean the jets. With this method of cleaning, the calibration of the jets is inevitable. The consequence of this will be a deterioration in the traction qualities of the vehicle and an increase in the operating consumption of gasoline. The washed carburetor parts and passages must then be blown out with compressed air.

The carburetor is assembled in the reverse order. In this case, it is necessary:

See also  How to clean the grass trimmer

For a long time, it did so from the engine to the gas tank, excess oil flowed down and carbon deposits constantly formed on the candle, since the manual indicated the proportion for the run-in engine 1:25, and on the canister 1:50. After switching to a 1:50 ratio, the appearance of oil drips stopped. The plug continued to burn, but with less intensity (the carburetor was not yet adjusted).

Until now, some users of gasoline tools determine the proportion of the fuel mixture by eye. If during the preparation of the mixture the amount of oil is underestimated, after a while an extraneous sound may appear immediately after starting the engine, gradually disappearing during warming up, and the engine stops with a sharp jerk. Continued use of the trimmer in this mode will lead to its failure.

We start adjusting low speed. Screw number 2 limits the return movement of the throttle lever by turning it, we increase the idle speed, unscrewing it, we decrease it. Adjust so that the engine runs confidently at low revs and even a little accelerated (for better starting), but so that the line reel or knife does not rotate, and there is a sufficient reserve of revolutions before they start rotating. If the engine starts poorly, increase the idle speed even more.

A trimmer is a broader concept than a brushcutter (brushcutter), since it can also be electric. A petrol trimmer and a petrol cutter are one and the same.

Some authors claim that the trimmer is a weaker tool in contrast to the more powerful petrol cutter, which can be used for cutting bushes. Personally, I have a tool with a maximum power of 1.7 kW and is capable, as stated in the instructions, to mow small bushes up to 10 mm thick. The user manual is called Petrol Trimmer.

Flush the air filter before adjusting the carburetor. It is recommended to rinse it after every 10 hours of operation. After that, you can start adjusting. The graph shows an example of a PRORAB-8406 petrol trimmer carburetor. The numbers indicate the adjusting screws that we will use.

Start a petrol cutter and wait until it warms up.

My first attempt to adjust the carburetor of the brushcutters did not work, since the spring of the screw for adjusting the fuel mixture interfered with. The factory spring turned out to be too thick when compressed and did not make it possible to reduce the fuel supply to the required level. I had to pick up another spring and continue adjusting after replacing it.

On the graph above the factory spring, below the adjusting screw with the selected spring. I am writing about this because I’m not sure if this is an isolated case, and someone else may face the same situation.