How to Clean Carburetor on a Benz Trimmer Partner Video

Most modern chainsaws have very similar carburetors with a few exceptions. 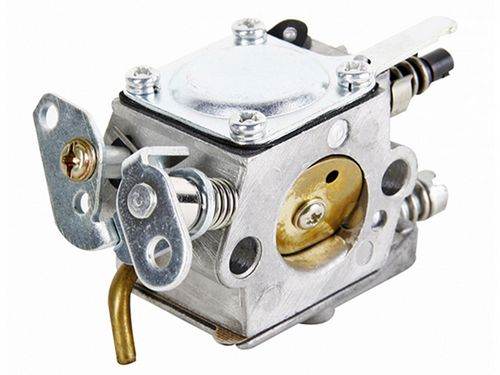 Often the difference lies in the quality of the parts and the presence or absence of a primer connection tube – a manual pre-pump.

Therefore, we will consider them almost impersonal, without going into the nuances.

The device and principle of operation of the carburetor chainsaw

The task of the carburetor: to prepare a mixture of gasoline with oxygen and dosed to feed it into the cylinder. Mixing takes place in the diffuser (16) – the tapering part of the carburetor, where the air flow accelerates. Through the 2 nozzles (15) and (12), gasoline of various fractions (larger and smaller) and purified air after the air filter enter the diffuser. Its quantity is regulated by an air damper (7) at the inlet to the diffuser. The quantity of the finished mixture fed into the cylinder is regulated by another damper (8), which is behind it.

Two screws (17) and (10) (L and H) control the amount of gasoline passing through the jets. The amount of gasoline in the float chamber (14) is regulated by a needle valve (11), the operation of which is monitored by a membrane (13). The second membrane (4) doses the amount of fuel supplied to the chamber, depending on the engine speed. Along the way, it is filtered through a filter (6).

If both the air and gas filters are clean, the channels and nozzles are not clogged, the membranes are whole, and the needle valve reliably regulates the amount of gas in the float chamber, then the carburetor is working, and for the normal preparation of the mixture, the amount of gas supplied through the nozzles must be correctly adjusted. We will not talk about the mechanical wear of the metal parts of the body and the rods of the carburetor dampers, because it will be cheaper to simply replace it than to repair it.

How to adjust the carburetor on a chainsaw?

From the factory, all the saws come with an adjusted carburetor.

And, since it is protected by a plastic case, for a long time does not require additional adjustments. And one should intervene in its work only when the saw begins to stall with a guaranteed working cylinder-piston group, which is most often caused by a lack of fuel and, as a result, an excess of air.

The second symptom of poor carburetor operation is excessive fuel consumption and increased smoke exhaust, indicating an excess of gasoline in the mixture. In this case, before climbing to the carburetor, you should clean (or replace) the air filter and make sure that the cause has not been eliminated.

Sometimes the carburettor misregistration occurs gradually, due to increased vibration of the tool, as a result of which the adjusting screws can turn from their original positions.

First of all, before removing and disassembling the carburetor, you should try to adjust it. For this:

1. The carburetor adjustment should be started with the screw L, which adjusts the fuel supply at low revs. Its rotation should achieve the highest speed. Turns increase when this screw is tightened.

2. Next, screw N needs to adjust the quality of the mixture. If the saw smokes – this is a sign of a rich mixture, and if a squeal – poor. In the first case, screw H should be tightened, and in the second, vice versa. You should be very careful with this screw; improper adjustment can even damage the saw. In no case can it be tightened.

3. The idle speed setting, which is set by screw T, completes the adjustment. At high speeds, the clutch cams are in a divorced state and the saw chain moves. Screw T adjusts the stop of the flap control from the outside and does not enter the carburetor. You should not keep the engine speed too low, while the loads on the crank mechanism increase, but the chain at idle must be guaranteed to stop. This screw in some saws may have a different literal meaning.

Some carburetors initially have only one setting – idle, in them the quality of the mixture is set by the parameters of the nozzles and the factory settings initially. The idle adjustment video on these carburetors is also suitable for all other types of similar devices:

Video: How to Clean Carburetor on a Benz Trimmer Partner Video

And a violation of the saw’s operating modes without speed adjustment screws and mixture quality may indicate that it needs to be repaired or at least cleaned.

It remains to add that the final adjustment should be made only on a heated saw, which worked for at least 10 minutes.

Self-disassembling and repairing the carburetor

Immediately make a reservation: if you are not an expert in this type of activity, then it is better to contact a service center. Sometimes the cost of a carburetor can reach one third of the cost of the entire saw.

But, if you decide to independently disassemble the carburetor, we recommend that you find a couple of free hands, put a video recorder in them and take a close-up shot of a video of disassembling the carburetor. This will help with its assembly unequivocally, because marking small parts for the correct order of its implementation is almost impossible.

READ  Patriot Trimmer Does Not Turn Up

In almost 80% of carburetor failure cases, you can blame the jet that delivers fuel to the diffuser. But, before cleaning it, we recommend stocking up with a repair kit, which necessarily includes membranes, gaskets, and sometimes this nozzle with a needle valve.

Even if disassembly reveals their integrity, it would be better to install new ones, because even a micron change in the parameters of the membranes can affect the operation of the device.

If the jet needs to be cleaned, then it is better to do this, having previously unscrewed it with a thin calibrated wire. It is better to blow the second nozzle by mouth with the help of an extension tube or a bicycle pump, but in no case with a compressor – there is a high probability of damage.

We picked up a video about repairing a carburetor for a Stihl 180 saw with only an idle screw. But its internal structure is the same as that of almost all chainsaw carburetors:

And the point here is not only that the missing adjusting screws clutter up the picture, distracting from the essence of the process, but also that this disassembled carburetor can also be slightly adjusted by adjusting the quality of the mixture. If your Stihl before the carburetor repair suffered an increased fuel consumption and smoked, then you can reduce the fuel supply by increasing the needle valve clearance by slightly bending its rocker arm. The reverse procedure can increase the fuel supply.

When disassembling, always clean the filter. To remove deposits, you can use the drug WD-40, but if you remember that this is actually white spirit with the addition of oil, then you can do it. And the use of kerosene or acetone is also allowed.

The simplest, or preliminary, adjustment of the carburetor of the chainsaw can be done as shown in the video, and the final one after warming up the saw:

Dear readers, if you still have questions, ask them using the form below. We will be happy to communicate with you;)

Lawn mowers, like all gasoline powered tools for the garden, are not difficult to maintain. It is possible and necessary to repair, configure yourself. For example, adjusting the carburetor of the lawn mowers with your own hands is a matter of five minutes.

Lawn mowing carburetor is a unit in the power system. In it, like any carburetors, there is a process of mixing air and fuel (gasoline) for further supply to the engine cylinders.

READ  How to Change a Disc on a Trimmer

The device of the carburetor lawn mowers

The basis of the carburetor of the lawn mowers is an aluminum case. It has a diffuser (hole with internal contours). Air is blown through this hole. The oxygen (air) flow rate depends on the cross-section (passage opening) of the diffuser.

The principle of the carburetor lawn mowers