How to Saw a Pipe Under 45 Degrees

When carrying out installation work on gas or water mains, it is often necessary to change the direction of the line, while the pipeline is cut off and then welded at the right angle. Most often, the direction changes by 90 degrees, while the question arises. how to cut a pipe at 45 degrees in order to accurately connect the joints when welding.

To cope with the problem at the corners of the trimmed edges of 45 or 90 degrees, you can possess the appropriate knowledge and techniques that will help save not only time, but also materials during the work. At other turning angles, it is impossible to solve the problem with a ruler and a sheet of paper. you will have to call computer equipment for help. 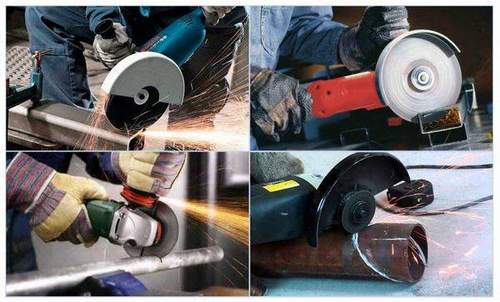 But, if you still need to cut off a pipe of circular cross section from steel or various types of plastics, then you will need a piece for cutting pipes at an angle, the shape of which is calculated manually or by machine. The task is greatly simplified if, at an angle of forty-five degrees, it is necessary to cut the metal profile of a square section.

For quick cropping, you can use a regular sheet of paper folded diagonally, with the help of which they mark the surface for a future cut. Using folded paper, proceed as follows:

For sawing, you can use an angle grinder with a disc for metal, passing at the beginning a thin line along the marking, and then gradually deepening it until the edges are completely separated.

When working with an angle grinder, the following factor must be taken into account. when cutting the edges completely, the disk may be damaged by an acute angle, which will lead to its failure, and in the absence of protection on the angle grinder, even to injuries to the worker. Therefore, it is advisable not to trim the corner edges to the end, but to leave a narrow groove and then break off, subsequently grinding the protrusion.

Making a template for trimming a metal profile

If you need to cut a large number of pipes, you can make a template from a metal profile of a larger diameter on a paper sheet in the above way. The angle of inclination is checked by a protractor or building angle. in this case, the two edges of the trimmed parts of the template are connected.

When working on the part to be cut, the template is put on in the right place and pressed tightly, the marking is applied with a sharpened scriber when the template path is drawn. The part is cut in several passes with a gradual deepening of the groove.

Fig. 3 Cutting a metal profile with a miter box

Using the template is not very convenient. you have to cut along the line, keeping the angle grinder on weight, which leads to large errors. With a welding machine, you can make a simple miter box. the guides for the disk are an angle grinder that does not allow it to go sideways.

To do this, use the previously made template, in the side of which a hole is drilled and a nut is welded. When working, a homemade miter box is put on the profile, a bolt is screwed into its nut and the device is pressed to the profile surface. An angle grinder with a disc for metal is cut, slightly pressing the disc against the side surface of the device. It is clear that with prolonged operation, the edges in the miter box gradually grind, and although the process occurs simultaneously on all edges, some errors will appear over time. Therefore, it is better to make the device out of hard wear-resistant metal in order to increase its service life and obtain a more accurate tool.

To smoothly cut across a round pipeline or rectangular metal profile, use a sheet of plain paper. They wrap the workpiece in such a way that the edges of the paper sheet coincide, after which it is fixed to the part with adhesive tape or glue. an angle grinder is carried out near the edge of the paper sheet a thin fishing line, after which it is gradually deepened to full cutting.

A metal profile or a round pipe can be sawn with the help of a template, wearing an evenly cut element with a large inner diameter.

To get branches of metal pipelines in the form of tees, a collar insert is used, for which it is necessary to cut the edge of a round pipe adjacent to the walls of the other at a right angle. To implement the method proceed as follows:

Video: How to Saw a Pipe Under 45 Degrees

Fig. 5 Example of a collar section of a pipe

See also  How to cut aluminum angle at 45 degrees

Techniques for cutting pipes at an angle of circular cross section

Round pipes of different diameters are cut at an angle when the direction of the pipeline changes, it should be borne in mind that a straight cut at the right angle, unlike a rectangular section, will not lead to a tight connection of the edges. Therefore, special patterns are used in which the marked edge has a curved shape, which allows to obtain a high connection density.

One of the common ways to make patterns for pipes with a round surface is a method for which you need a scribbled sheet of paper, a ruler and a pencil. To obtain the paper patterns do the following:

There are several ways to cut a pipe, for this they use construction and industrial tools for metal processing. Of all the types, only an angle grinder allows you to get curved surfaces without further processing with the closest edge arrangement.

The following tool is used for cutting steel pipes in the household:

Manual pipe cutters. They allow you to cut round parts to obtain an even right angle of cut due to the cutting edges of the rollers. There are several varieties of products of this kind, consisting of single rollers or a series of them, fixed on a chain. In everyday life, such devices are quite rare and more suitable for professional work.

Angle Grinder. It is a universal tool for trimming any metal parts with different angles; special metal disks are used for work, which grind quite quickly during operation. Thanks to this, you can accurately cut a curved line with a small-diameter disc.

Gas-burner. A quick and effective method of cutting metal surfaces with a hot stream of flame, the disadvantages include fused edges, which complicate further welding. It is difficult to cut the product with a gas burner according to a paper template, which will burn, and if the line is drawn, then in a stream of flame it will practically not be visible.

Electric pipe cutters. To work with pipelines of small diameters, you can use compact electric pipe cutters, reminiscent of an angle grinder according to the principle of operation. The device is called a roller machine, during operation the part is installed on the bed and rotated on roller guides, from above its surface is cut through by an electric device. The main difference between the pipe cutter is a metal disk having a special durable spraying for cutting metal.

In industry, large-diameter pipelines are used for transporting liquids and gases, therefore, pipe cutting units have a large weight and overall dimensions. There are also manual pipe cutters of the rotor and clamp principle of action. In the first case, the cutting rollers rotate on a round surface using a rearranged handle, in the second case, the cutting is carried out by arched plates, which gradually rotate during rotation.

See also  How to cut a skirting board at 45 degrees

How to cut a pipe at 45 degrees large diameter

It is better to cut a large-sized product in domestic conditions using a large angle grinder or a gas burner. the walls with large diameters are usually thick. Cutting is best done in segments, leaving narrow transitions that are removed at the end.

The main difference between cast iron and ordinary steel is its high brittleness and large wall thickness; it must be precisely trimmed in the following sequence:

supports under the part lay a wooden board or board.

A few tips for cutting pipes

Sometimes in the household, cutting is required to connect the pipe at different angles or along the axis. The main tool for this work is a universal angle grinder and metal discs.

To qualitatively perform a smooth longitudinal section, you can use a simple device in the form of a metal corner. It is securely fixed on a flat wooden surface with screws and the pipe is pressed against it with a heavy load. Angle grinder make a longitudinal section of the pipe top, slightly resting the disk on the surface of the corner.

The corner can be attached to the pipe with clamps and make a cut on the upper wall of the corner in a similar way.

When you change the direction of the pipeline at an angle greater than 90 degrees, manual methods for making templates become too complicated. Using a special program for calculating and creating patterns on a computer for any angle can come to the rescue. The method is good because it has a high accuracy of creating paper templates and is easily implemented with a printer.

To obtain paper patterns, the program enters the necessary data on the bending angles and the pipe diameter, after which a template is obtained, which is printed on a printer in full size. It remains only to cut it out, stick it on the element to be cut and mark its outline.

Further cutting is carried out using an angle grinder in a standard way. An important advantage of machine templates is the ability to cut them in unlimited quantities with the same accuracy.

For high-quality connection of cylindrical elements of pipelines, their precise trimming at angles of 45 and 90 degrees is required. To perform these works, special patterns are used, the shape of the bends of which is calculated manually or constructed by a computer. They are cut out on paper and glued to the pipe surface, then the element is cut on a paper path by an angle grinder with a small disk. Thus, it is possible to obtain a high-precision angular connection with as close as possible edges.