A gas brush or a trimmer with internal combustion engines require not only constant refueling of the fuel mixture of gasoline with oil, but also periodic adjustment of the supply of this fuel. The carburetor is responsible for supplying fuel to the cylinder of the brushcutter, the efficiency and productivity of the tool depend on the proper operation of which. If a malfunctioning (abnormal) engine operation is detected during operation, then the first step is to adjust the carburetor of the brushcutter. Before setting up the carburetor of the gas trimmer, we will first deal with its design.

Design of a petrol-trimmer carburetor and its purpose

Structurally, the entire mechanism is a small-sized part, inside of which there are channels, valves and membranes. The carburetor body is made of aluminum, and the internal device is shown in the photo below.

Before you adjust the carburetor with your own hands, you need to deal with all the components of the device in question. The carburetor of the brushcutter and trimmer consists of the following parts:

Having an idea of ​​how the carburetor is arranged inside, it remains to be understood how it works. A detailed description of how a carburetor works on a two-stroke internal combustion engine using an example of a chainsaw is described in this material.

How does a petrol scraper carburetor work or how it works

The carburetor adjustment of the Chinese petrol scythe is completely identical to the setting of the lawn mowers of European, Russian and manufacturers. In order to cope with the task of adjusting the carburetor on gas scythes and gas trimmers, it is necessary to understand the principle of their functioning. How a carburetor works on a benzokos is described step by step and available below. 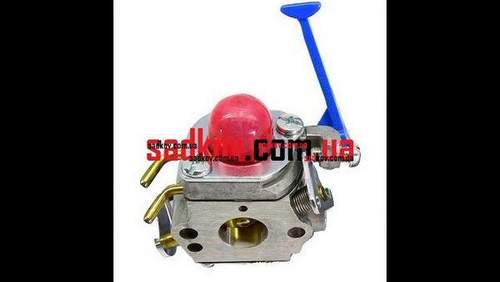 When operating the tool, one more nozzle must be considered. This nozzle is located between the idle and full power channels. It is necessary in order to exclude severe depletion of the mixture, which occurs in the case of motor operation under partial load. In this situation, the occurrence of a badass pair. Through an additional channel (jet), the fuel is sucked into the chamber, whereby the fuel-air mixture is enriched. The following diagram shows an additional nozzle, which is indicated by the number 1.

Having an idea of ​​the design of the membrane carburetor of the lawn mowers and the principle of operation, it will not be difficult to do it yourself. Adjustment screws are used to adjust the carburetor of the brushcutter. The diagram above shows two screws for adjustment, however, most modern models of gasoline trimmers are equipped with three screws. The presence of three tuning screws allows for more accurate adjustment, while achieving stable and uninterrupted operation of the internal combustion engine.

How to find out that the petrol scraper carburetor needs adjustment

See also  How to Disassemble the Trimmer Black Decker Gl 9035

As you can see, there are enough reasons to adjust the carburetor of the lawn mowers. Usually, craftsmen who work with the tool for a long time, by ear, detect changes in the operation of the motor, which promises the need for an adjustment process. Even if you are not sure about the need for adjustment work, then their extraordinary performance will definitely not be superfluous.

The process of adjusting the carburetor of the gas trimmer or trimmer is not difficult, however, its implementation should occur step by step in compliance with the recommendations. Before starting work, it is necessary to carry out preparatory actions, namely:

When all the points of preparation are completed, we proceed to the direct process of tuning the carburetor. First you need to start the engine, and let it run for 5-10 minutes, depending on the ambient temperature. When starting the motor on the XX, the coil or knives on the trimmer should not rotate. If they move, then it is necessary to reduce idle speed. The photo below shows an example of the location of the adjusting screws that make the adjustment.

Using a slotted or Phillips screwdriver, we proceed to the direct process of tuning works. First, we reveal the number of screws for adjustment, since there can be 2 or 3, which depends on the manufacturer of the tool. Typically, Chinese trimmers are equipped with two screws. Below we consider the carburetor setup process, which has three tuning screws:

See also  How to dilute oil with gasoline for grass trimmer

Often, it is precisely with the setting of maximum revolutions that difficulties arise. To prevent this from happening, the following actions are performed:

If the tuning work is done correctly, the tool will work stably, the cutting element will not rotate at idle, and the fuel consumption will be the same as on the new trimmer. Setting up a carburetor with two screws is much simpler, but the tuning accuracy is much lower. Typically, Chinese gasoline tools, as well as household units, are equipped with 2 screws.