Chainsaw motor oil must meet a number of requirements. First of all, this is high thermal stability and anti-wear properties: when operating a chainsaw, especially in summer, the motor can heat up to high temperatures. Since the exhaust is directly in the working area, minimal smokiness is desirable. Based on these points, ROLF Lubricants GmbH creates specialized oil for gasoline powered tools and garden equipment with two-stroke engines.

What parts of a chainsaw need oil

The quality of the lubricant directly determines the life of the engine. Despite the small displacement, the chainsaw motors are relatively powerful. The inertial loads on the parts of the crank mechanism are proportional to the square of revolutions. Since most of the gasoline powered tools most often run at full throttle, chainsaw oil should maintain its properties at high shear rates and prevent dry friction in the crankshaft bearings and piston group.

In addition to the engine, the tire also needs lubrication: a sliding chain inevitably wears it out. Forced oil supply from a separate tank saves resources both on the tire and on the chain itself. Whenever possible, the oil used for lubrication should be as viscous and sticky as possible so as to better hold onto the chain and tire, and not scatter to the sides. Additionally, according to environmental requirements, such oils are usually biodegradable.

How to choose oil for a chainsaw

The main indicator of quality, which can be evaluated independently, is the smoke during combustion. Modern standards for push-pull oils directly set extreme requirements. Therefore, high-quality oil with a normal composition of the fuel mixture should smoke minimally. 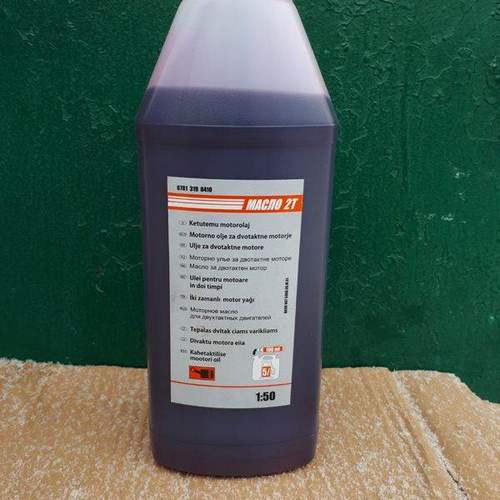 Unlike automotive lubricants, where the basic standards are set by API (American Petroleum Institute), two-stroke oils are mainly based on their own quality classes. The JASO F system developed in Japan is now used most widely. The largest share of lubricants for two-stroke engines corresponds to JASO FC and FD. It was the JASO FC class that introduced the concept of “low-smoke oil” in its time. That is, the oil for lubricating the chainsaw should at least correspond to this class, so as not only to protect the engine from wear, but also to make the work more comfortable.

For heavy loads, it makes sense to use JASO FD lubricant. This class defines more stringent requirements for carbon deposits in the engine. So the motor will be less likely to require cleaning the grooves of the piston rings.

It is also advisable that the oil has proven classes according to the European ISO system. It is based on the JASO system, but further strengthens engine cleanliness requirements. Therefore, an oil with the ISO-L-EGD class (based on JASO FD) will provide the engine with the highest purity.

The oil is made on a synthetic basis, which provides the highest quality. Therefore, ROLF Garden 2T has a low smoke, burns completely and with extremely low carbon deposits. At the same time, it reliably protects the motor from wear, since it has a balanced additive package. With long-term engine operation, the ROLF Garden 2T eliminates the rapid pollution of the muffler by soot and products of incomplete combustion of oil, which reduce the power of the chainsaw.

The oil was developed specifically for garden equipment, where the main method of lubrication is the finished fuel mixture. When creating the ROLF Garden 2T, this was taken into account, and the product received excellent stability in a mixture with gasoline. The finished composition during storage eliminates stratification, clogging of the carburetor channels. The oil does not reduce the octane number of gasoline, eliminates the risk of detonation under load.

Due to its low freezing point, ROLF Garden 2T is also suitable for winter work, which preserves the effectiveness of engine lubrication with the fuel mixture. Oil burns well in the engine, reduces the risk of failure of spark plugs. Thus, the amount of maintenance required for a chainsaw can be minimized.

The quality of the oil is confirmed by the tolerances of the largest manufacturers of chainsaws. In addition, ROLF Lubricants GmbH offers a simple and effective anti-counterfeiting system: all of the company’s products are packed only in tin containers. As practice shows, counterfeit in such conditions is practically not found on the market: packaging for plastic is more profitable for manufacturers of fakes.