Unlike the hinge elements discussed in the first part, the following category is more complicated in technical design and more productive. Agriculture and utilities need to perform the same operation every season, sometimes around the clock. Therefore, the choice of equipment with moving parts should be treated as carefully as the choice of walk-behind tractor.

Activator attachments are factory non-self-propelled devices that are designed to solve problems in conjunction with a walk-behind tractor or tractor, and are driven by their power units. We will consider the most popular and functional of these devices, dividing them by purpose.

Note. Applications often overlap, so the same unit is often in demand in both industries.

The purpose of tools of this type is associated with the main operations for processing cultivated plants. planting, harvesting, mowing. Each of them works literally 1-2 weeks a year, continuously performing its functions during this period.

Device. It is a cone-shaped tank (20 l) with an integrated chain elevator. The whole structure is mounted on a frame with wheels. Drive. to the elevator. At the front and rear, there are hills. 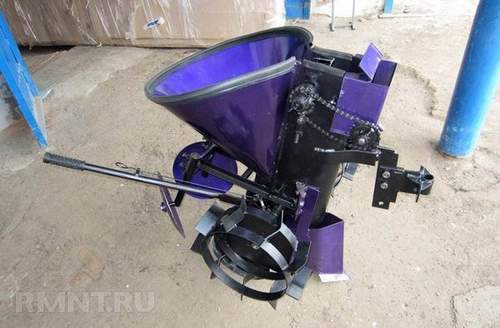 Operating principle. The elevator picks up planting material from the tank and evenly puts it in the garden. The front hoe reveals a seat, the two rear rake up the ground, covering the tubers.

Operating principle. In the direction of movement by force from the walk-behind tractor, the cutter goes deeper under the nest and the soil with tubers passes to the rods. Vibration sifts the earth, separating tubers from it.

Device. Hinged frame construction. In the frame of pipes with a diameter of 1 inch or more laid rods connected by a worm gear (transmission). In the lower part of the frame, discs with knives fixed at the edges are movably mounted through bearings through the bearings. Drive. at the beginning of the transmission.

See also  How to disassemble the battery of a Makita screwdriver

Operating principle. The transmission transmits the force to the discs (rotors) and they rotate and cut the stems with knives.

The mowing machine can be front and rear layout, have more than two rotors, reinforced frames, "skis". Also there are models with a monorotor (unpopular due to poor performance). It differs only in execution, but not in principle of action. She took root because of the successful and maintainable design, lightness and reliability.

Another name is trimmer. It is widely used for lawn mowing in public utilities, but is perfect for haying.

Device. The main working body is the mirrored paired gear segments, one of which (movable), moving relative to the other (fixed), creates a shear force between the teeth. A connecting rod is connected to the movable one, which creates translational-returning efforts. Drive. to the connecting rod through pulleys and wheels.

Operating principle. Identical to the operation of a hair clipper.

often, such a device can be seen on light garden tractors, because it has a significant weight due to a more complex design (than a rotor). Only small models with a working width of up to 1.2 m are relevant to the walk-behind tractor.

Device. It is a conventional axial soil mill with a removable implement installed in the casing. Drive. to the axis of the cutter.

Principle of operation. Activating from the drive (pulley or PTO), the cutter blades rotate around the axis and loosen the soil, cutting the weed.

The mounted cutter is more convenient and easier to use and when changing operations. it is easier to “unfasten” the hitch than to change the axial equipment. over, this cutter is self-propelled and is much easier to control due to weight distribution on wheels.

Device. The main element is a cast steel cone, which has a continuous threaded thread over the entire area. It is mounted on bearings in a sleeve case (Ø 40-60 mm), which, in turn, is mounted horizontally to the desktop. The table can be installed both on the walk-behind tractor and independently. The drive is on a movable cone.

Operating principle. The rotating cone with the help of a thread is buried in the wood (in the manner of a screw), from which it eventually splits.

Benefits. All work on chopping firewood using this device comes down to bringing logs to the tip of the cone. Caught on the thread, it without pressure is embedded in the log. Large models are installed instead of the excavator bucket and split huge stumps.

A key detail. a threaded cone. can be purchased separately, its price ranges from 1,500 to 2,500 rubles. depending on diameter and material.

From the size of the cultivated area in our country, we can conclude the scale of demand for such products. over, the soil in different regions and even cities is different. This forces farmers to customize the purchased equipment to local conditions. They introduce their own know-how on the ground, increasing the reliability and performance of the base models. Sometimes copyrighted works collected from improvised material come out of the garages.

Of course, the range of agricultural implements is much wider and many of them have a complex modern design. For example, multi-row seeders, in addition to the traction and activating efforts of the walk-behind tractor, use the air pressure from the motor fan to create a vacuum. Many rakes, hay throwers, pitchforks, sprayers, aerators and plane cutters are available for walk-behind tractors and it is not possible to describe them all.

This category includes everything that cleans the surface and groups the products of stripping. For four-wheel tractors, the range of such “spare parts” is large, everything is decided by the tractor tonnage and hydraulic pump performance. In motor-blocks, due to their two-wheeled nature, the entire arsenal is reduced to literally three units.

The blade blade described in the previous article is simple and understandable, but it belongs to the stationary class of equipment. There are even models that work without a walk-behind tractor.

Device. Brush drum with plastic bristles mounted on an axis with a drive. Sometimes it has a protective casing and additional transport (supporting) wheels.

Operating principle. Rotating, the brush sweeps the material from the surface and discards it. You can change the installation angle.

Benefits. Such brushes are relevant at any time of the year, in every city, in the park and in the yard. They clean any flat surfaces in a matter of minutes, without taking up strength. Their larger varieties are used on all types of municipal equipment. tractors, graders, soil scatters. Some models have a container for collecting material.

Attention! When choosing a brush, pay attention to its compatibility with your walk-behind tractor model.

Design. In the snow intake (hopper, bucket) an axial aggressive screw is installed, in the middle of which 2 or 3 blades are located. The auger blades are located at an angle, which allows him to crush the caked crust and move it to the blades. Drive. to the auger axis.

Operating principle. When the axis rotates, the auger feeds snow mass onto the blades, which lead it to the discharge trench (deflector).

Question. Is there a difference between a walk-behind snow blower and a MB-based factory snow blower?

Answer. There is. It lies in the design of the device itself. The mounted snow blower has only one operating mode and one constructive solution. the active auger. A factory snow blower based on the same MB has a more advanced, but non-removable, screw rotor design. The screw only feeds the snow mass onto a separate impeller (rotor). This distributes the load, at times increasing the reliability and performance of the machine.

Mounted auger rotors are also very popular with rescuers and the military, and generally where it snows. They can be colossal in size. They are installed on powerful tractors, caterpillar tractors and all-terrain vehicles in the event of natural precipitation.

Utilities and hotel staff, unlike farmers, do not have the time and resources to rework and rationalize. Their main need is the timely removal of garbage and snow from the surface of the earth (cover).