Perhaps not everyone is familiar with the detailed design of the car, but many know the general concept of what a gas pump is. This small and, at first glance, unremarkable detail does the responsible and necessary work in the life of any machine, providing fuel from the tank to the engine.

In other words, the failure of this spare part can make you go to work on foot, as the car simply will not start. That is why it is so important to understand the features of the gas pump and how to diagnose its breakdowns, which we will talk about today.

Methods for checking the pressure of the gas pump

Fuel pump. This is a small device of the car, the main task of which is a stable and controlled supply of fuel to the engine. As you know, the fuel tank and motor of the car are located at different ends of the vehicle, so the question of delivering flammable liquid from point A (tank) to point B (engine) cannot be called simple. There was a time when a fuel hose was used for this purpose, in which the fluid could flow under the influence of gravitational forces, but it did not give the opportunity to control the amount of fuel, and it is difficult to do without it, because for the proper functioning of the heart of the car, the fuel supply should be stable (for it meets the fuel pump gearbox). Based on this, it becomes clear why it is so important to be able to properly service this part and conduct its diagnosis on time.

In electric gas pumps, the “pushing” of fuel is controlled using an electronic system that takes into account the content of exhaust gases and the ratio of the fuel-air mixture. The trigger of this type is an electric motor, which in turn responds to an ignition switch that is turned on. On modern vehicles, the flow rate of the combustible mixture is regulated electric fuel pump, depending on the needs of the engine, instead, in older models, this process was constant, despite the "desire" of the engine.

Mechanical a gasoline pump can be called a more traditional type, installed most often on carburetor vehicles. The engine itself makes it work, through a system that transmits rotational actions, and the pressure of the fuel mixture is quite low. Unlike electric, mechanical gas pumps are mounted on the outside of the fuel tank, and sometimes, instead of one, two whole devices are installed: one works at low volumes and high pressures, and the second, on the contrary, at low pressures, at the same small volumes.

To check both types, you can either use the services of professionals, or do everything yourself. In the case of a mechanical gas pump, the pressure can be diagnosed in the following way: the hose between it and the carburetor is disconnected, during which gasoline should spray under a slight pressure. Then you need to direct the hose to any available container and turn the motor with a starter. If the pump pumps half a liter of gasoline in 30 seconds, then everything is in order with pressure, if this does not happen, you will have to restore the entire system, in the following way:

– pump the fuel line between the gas tank and the pump with compressed air;

Also, You can check the pressure of this device using a conventional tire pressure gauge, which many motorists probably have. The only drawback of this method is the small errors at the initial values, since they are designed to measure high pressure (up to 16 Atm), while similar fuel devices are limited to 6 Atm. You can check the electric gas pump at home using a light bulb (usually 12 V) to check the power supply and the wiring. In the first version, it is connected between the black and gray wires at the terminal of the fuel pump and should light when the ignition is turned on. Secondly, with its help, the relay is checked (it must be signed on the fuse and relay block).

Video: How To Check A Gas Pump. Find Out Whether It Is OK

How to check the serviceability of the fuel pump with the “vagaries" of the engine?

Fuel pump, regardless of type, from time to time, under the influence of various factors, fails, and this is most often manifested in the operation of the car engine. The first alarm bell informing that something is wrong with this device is an unusual start of the motor. If it does not start or if this process takes a lot of time, then we can safely assume the possibility of a breakdown of the gasoline pump. When, due to the unstable operation of the engine, the vehicle starts to “twitch” during movement, or when it is idling, its instability is noted, in such cases, we can also talk about signs of probable problems with this part.

How to check the gas pump using improvised tools?

We already said today that you can check the pressure in the gasoline pump using a special pressure gauge or similar device that is used to check tire pressure. Both types of measuring devices relate to auxiliary mechanisms for verifying the performance of an automobile gasoline pump. In addition to them, in this category, there is also a 12-volt light bulb and a tank for draining gasoline, since with them you can get the necessary data. Now we will consider the process of applying each of these items in more detail. 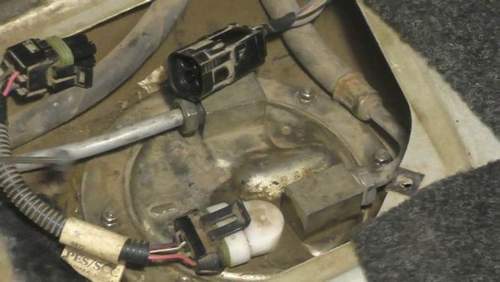 A special pressure gauge, designed to measure pressure in the fuel system, is designed for a maximum of 6 Atm., And connected to the fuel rail, through the edge of the hood is displayed on the windshield. The values ​​you need to fix, the device will show immediately after turning on the ignition (the norm is in the range from 300 to 380 kPa.), Then, after dispersing the car to third gear, again pay attention to the data that should remain in the same framework. If this is not so, it means that there is a problem on the face and it is best to turn to a specialist for help.

To diagnose a gasoline pump using an air pressure gauge, you will need a special tape, often used by plumbers to seal joints, or construction flax. The design of this type of instrument provides for a nozzle with a diameter of at least 9 mm., Onto which the described tape is wound. Having completed this action, we find the fuel rail (the location is indicated in the technical specification for the machine), which is usually closed with a plastic cap and turn it off. Below it is an object that looks like a wheel nipple, it must be removed.

You can do this using the same tools that are suitable for wheel repair. Unscrewing this part of the ramp, you will certainly meet with the flow of gasoline that rushed from there due to pressure, so you should prepare the appropriate container in advance. In order to relieve the general pressure in the engine, it is necessary to remove the fuse from the gasoline pump (located on the common fuse panel, and you will find out more precise information about its location from the instructions for the vehicle).

After that, the engine is started and since the gas pump does not work, it will soon die out. Here it is already possible to proceed directly to the measurement, having previously put the hose from the pressure gauge on the ramp and tightened it with a hose clamp. Then we start the engine and look at the readings of the device. On different cars. different rates of fuel pressure in the system. For example, on VAZs, with an engine capacity of 1.6 liters, this figure should equal 4 Atm. The convenience of this method lies in its ease, based on which, if necessary, this procedure can be carried out in the field.

In the case when the car stalls during movement, most likely, the problem should be sought in the electrical part, first of all by checking the fuel pump relay. There is nothing complicated about this, you just need to connect the light bulb (12 V) to the fuel pump connector and turn on the ignition: it lights up. look for the reason for something else.

In addition to the problems described above, quite often traces of oil are noticeable on a gasoline pump, which, most likely, indicates the wrong mounting of this device. Therefore, you must make sure that it is in the correct position and securely fastened. Additionally, it is also worth checking the condition of the sealing heat-insulating gaskets.

There are times when the removal of the fuel pump is required to troubleshoot. Most often, this occurs due to damage (deformation) of the diaphragm. This can be quickly fixed with a plastic film, further strengthening the damaged area with it. For a long time, such a repair, of course, is not enough, but to get to the garage or the nearest service station, it will certainly work out. In general, there is no problem that could not be solved, and the presence of creative thinking in a person allows you to use a variety of improvised tools and auxiliary mechanisms.