How to Cut Coconut at Home

The question of how to open a coconut inevitably arises for those who first decided to try it. In tropical countries, where this nutritious fruit is valued for its high calorie content and numerous beneficial properties and is constantly present in the diet, it is opened with a special device similar to both a drill and a corkscrew. In the northern latitudes, coconut is considered exotic, and such a tool is difficult to find on sale. Therefore, you have to take advantage of what is at hand.

How to remove liquid from coconut

Coconut water is often mistakenly called "milk." In fact, coconut water (juice) and coconut milk are two different things. Water is what is inside the nut, and the so-called coconut milk is obtained from crushed pulp with the addition of water. 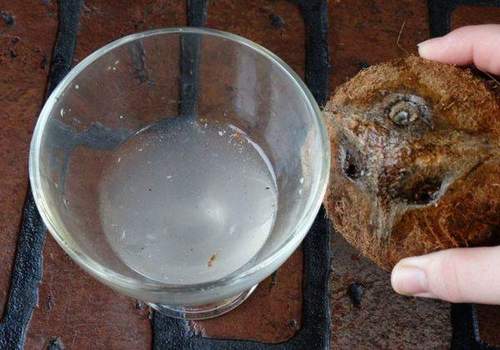 Before chopping coconut at home, it is necessary to remove the liquid from it. Otherwise, such a useful product will not only be wasted, but it will splatter everything around. They take a thin screwdriver and insert it into the holes (seedling pores) on the shell, piercing the skin that covers them. You may need to make an effort to do this, for example, hammer a screwdriver into the pore with a hammer. To speed up the process, you will need at least two such holes. Juice will flow from one, and air will flow into the other. You can understand that the hole is ready for the cotton, reminiscent of the sound emitted when opening the bottle with soda.

With small eye sockets, milk will drain slowly. To speed up the process, use a drill and drill a hole in the opposite side of the nut. Place coconut over the container; if necessary, blow air into the cavity. Liquid drains many times faster.

If the fruit is green and its immature pulp is inedible. It is a drinking coconut. Its main value lies in the liquid inside, and the shell is comparable in hardness to a ripened pumpkin. To open a young coconut, it is enough to arm yourself with a knife and cut off the top. Even a small penknife will do. Then the juice can be poured into a glass or immediately start drinking through a cocktail tube.

See also  How To Cut Porcelain Stoneware At Home

How to open a coconut

There are several ways to carefully chop a coconut using household items in any home. Each of them is chosen depending on what result is supposed to be obtained: peel the shell, keeping the pulp intact, get the likeness of a broken watermelon and cut the pulp from it, gently break the shell with the copra into two halves.

After opening the coconut, pay attention to the smell. Milk should have a characteristic pleasant and fresh aroma. Otherwise, the fruit has a sour smell, and the taste will give bitterness.

How to chop coconut with a knife

After the beneficial fluid is drained or drunk, the hard shell can be cracked using a knife using any of the methods below.

How to smash coconut at home with a hammer

Video: How to Cut Coconut at Home

To break a hard shell with a hammer, you need to put the fruit on a solid, flat surface and hit it hard. Then, insert a knife or the thin end of the hammer into the crack formed during the impact and open the nut by pressing on it and turning in different directions. Before you try to chop coconut at home with a hammer, it is recommended to wrap a nut in a towel. As a result, all the fragments will remain inside, which is very convenient: neat, and more secure.

How to cut coconut with a saw and a screwdriver

Opening a coconut in this way takes only 2-4 minutes, and the result looks beautiful and neat. It is best to take a hacksaw for metal, it can be easier and faster to cut a hard shell like a stone:

See also  Which Trimmer To Choose For Home

How can you break coconut in this case? Yes, by any suitable improvised means. For example, to open a coconut at home without a hammer, you can use a brick or stone brought from the street. In this case, it does not matter how to beat: with a nut on a stone or vice versa, but it is important to ensure that the main blow falls on the seam connecting the halves of the fetus. Naturally, there is no need to talk about cleanliness and accuracy. Therefore, before breaking a coconut, it is better to wrap a tropical treat in a towel.

The following method is much simpler. The nut must be thrown on a hard surface with a sweep. It can be a concrete wall or floor, a thick tree trunk. From the first throw on the shell, a crack will go through which it will be possible to drink or drain the milk. The second blow (ideally) will split the nut in half. Naturally, if it is not strong enough or the surface is not too hard, more throws will be needed.

If all else fails, just try to “smack” the coconut properly with a hammer, brick or other heavy object. But in this case, it is better to do this on the floor, preferably concrete, and wrap the nutlet in a towel. And do not expect that you get two even halves, as in advertising.

Another method requires some convex solid angle. For example, on the wall of a house, or brick. The fruit is applied to the corner with a suture and slowly rotated, methodically with effort pressing on it. This option also requires patience and strength and, of course, has nothing to do with the story of “how to quickly chop a coconut,” but as a result, a tough “nut” will split into two even halves.

How to chop coconut

For some, opening the shell of an exotic treat is the most difficult, while someone asks how to peel the coconut at home. This can also be done in several ways.

How to cut coconut? If the appearance of the resulting product is not important, the pulp from the peel can simply be cut with a knife. After that, the peeled pulp can be eaten or sent for storage in the refrigerator.

The most primitive way to extract the flesh is as follows: insert the knife blade between the shell and the edible part, and, shaking the knife, separate the piece. Then another one. And further. The main thing is not to rush anywhere.

How to clean the coconut from the shell and how to properly cut it if there is no knife at hand? In this case, you can use a spoon. This method will take a little longer, but the result will undoubtedly please.

If you need to get a beautiful whole copra, you can use the temperature difference method. First you need to drain the milk from the nut. Otherwise, it will “explode”. Then send it for 20 minutes to the oven, preheated to 180-200 degrees or for 15 minutes in the microwave, setting the maximum power. Then pull out and place for 20 minutes in the freezer. From temperature differences, the shell will crack and it will be easy and simple even to clear the coconut shell.

Shells after such processing are removed without difficulty, if you knock on them with the handle of a knife, and the process itself is similar to cleaning a hard-boiled egg. The result is a clean core that also looks like a large egg. It may leave a thin brown peel, which is removed with a knife or a potato peeler. Then the pulp can be cut into pieces and put in the refrigerator.

Make a souvenir from the shell. Most often, halves of nuts are used as a salt shaker, candlestick, plate for buttons, keys and other trifles. Small and plain shards will serve as drainage for indoor flowers.

You may not be able to properly carve the coconut using improvised items the first time. You need to understand that this activity is not so much difficult as painstaking, requiring patience and skill. It is important to observe basic safety precautions. After all, most of the tools used are piercing and cutting objects. And if not everything works out perfectly, you should not despair. The second attempt will undoubtedly be more successful.