How to weld a band saw at home

Visible beads may form on the web during annealing. They need to be removed by performing a second stripping. Now it is needed not for technical, but for aesthetic purposes. At the same time, you can correct the cavities between the teeth, giving them the correct geometric shape. Re-sanding can be done with any abrasive tool. Treat the metal so that the joints are almost invisible.

Welding for band saws starts with turning on the machine. The band saw welding machine is started depending on the model. It can be a separate button or a special handle. After starting, a welding current will be supplied to the ends of the saw, which will melt the metal in the area of ​​the future seam. The saw is supplied with current through the clamps. After the joint is heated, the movable clamp must be slightly displaced to form a weld bead. The seam is ready! 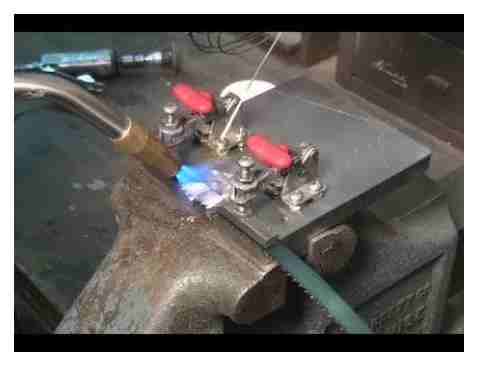 Make sure the surface of the electrodes is clean before welding. It is not necessary to clean all the electrodes, only the part that contacts the saw blade is sufficient. If you ignore this rule, the connection will turn out to be of poor quality. Contamination will disrupt the resistance of the circuit.

Installing the saw into the clamps

Above, we could already familiarize ourselves with the components that make up a band saw welding machine. We said that there is a clamping mechanism. It is in it that the saw blade must be installed. The clamp has a movable and a fixed part. Set one end of the blade to the movable one and the other end to the stationary one. There is free space between the clamps. You need to install the canvas so that its joints are exactly in the middle of this space. Naturally, the joint must be smooth and precise.

To make the ends to be connected even, the blade is cut with a guillotine. In its absence, you can use an angle grinder or chisel. When re-welding at the place of the destroyed old seam, 5 mm are cut off at the ends. the cutting line must be strictly between the teeth. At both ends, leave a draft allowance of 1.5 mm. With an abrasive tool, irregularities and burrs are removed. After cleaning the ends from dirt, they are degreased with a solution of industrial alcohol or acetone.

How to weld a band saw

Band saws, both for wood and metal, are made from a cutting blade connected in a ring. Since during operation they are subjected to cyclic tensile and bending loads, the joint in terms of strength should ideally not be inferior to the material of the canvas. Therefore, special equipment is used for welding strip plates.

The metal in the welded area becomes brittle under the influence of high temperature. To return to its previous properties, it is subjected to annealing using the same butt welding machine for band saws without removing the blade. The settings set the zero stroke value and change the current mode.

After the current is applied, the connection point heats up to 600˚C. The temperature is controlled by the readings of the pyrometer. If it is absent, they are guided by the color of the metal. A cherry red hue is considered normal. The appearance of orange or yellow color means overheating. When the required temperature is reached, the current supply is interrupted. The optimal annealing time is 3. 5 minutes. To prevent rapid cooling of the metal at low ambient temperatures, the current is switched on cyclically for short periods of time.

See also  Which walkbehind tractor to choose for home. Speed

Depending on the metal, it is sometimes necessary to anneal twice. Combining operations is possible to improve performance. Immediately after welding, current pulses are periodically started to increase the cooling time. After manual welding, annealing is carried out using a furnace and oil.

When contact welding is not available, high-temperature silver soldering with a special borax-based paste flux is used. To secure the ends of the web, a simple home-made device is used. Heating by a gas burner.

Soldering is carried out according to the standard procedure. Flux is applied to the beveled ends of the saw. After clamping in the fixture, the junction is heated to the melting temperature of the solder placed next to it. Under the action of capillary forces, it will begin to tighten into the joint. After the solder appears over the entire mowing line of the joint, heating stops. After cooling, the saw is removed and cleaned of sagging.

How to make a plywood band saw with your own hands

A popular option suggests making a band saw with your own hands from plywood: 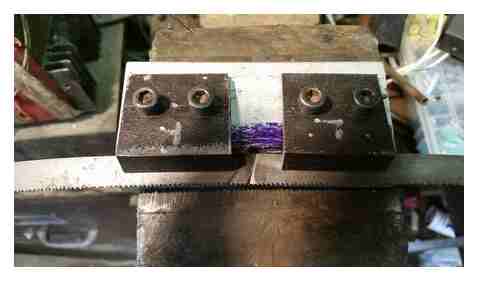 See also  How to Cut Textolite at Home

A homemade wood band saw with your own hands is ready to use. It only remains to configure it and make sure that the structure is functional. To do this, the saw blade is pulled to the maximum using the upper wheel, it is checked that the edge is perpendicular to the table top, and the guides are removed. The unit is started up and a test cut is made on a small workpiece, being careful not to subject the belt to loads.

If the saw is assembled with your own hands correctly, then the pulleys and the blade should move smoothly, without jerking and vibration. After checking, the guides are put back in place, now it will be possible to apply a load to the belt.

How a band saw works

Band saws may vary in design depending on the model. However, for a home workshop, a vertical blade machine is usually chosen, which consists of the following main parts:

How to join a band saw blade yourself, silver solder DIY

The structure is activated when the electric motor is turned on, and the cutting belt begins to move in a closed circular path at high speed.

Before proceeding with the construction of the machine, it is necessary to find the corresponding drawings. They indicate not only the design elements of the band saw, but also the dimensions.

The classic floor saw is about 50 cm wide

Knowing the dimensions of the future band saw helps to pre-select and clear a convenient place for it in the home workshop. 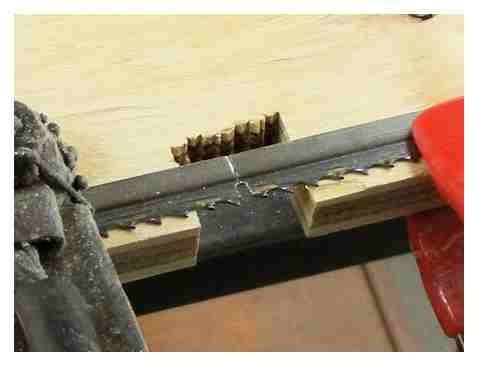 How to make a band saw with your own hands

There are several basic technologies for making a do-it-yourself band saw for home. Which one to choose depends on personal wishes and requirements, all options allow you to make a convenient and reliable machine.

How to make from a bicycle

An old bike, no longer needed for direct use, is perfect for making your own band saw for wood:

See also  Electrolobzik saws crookedly how to fix. Why saw at an angle and what to do

A band saw with your own hands for metal or wood is ready, it will not work as smoothly as a purchased one, but it will be able to cut.

If you wish, you can make a saw blade for a band machine with your own hands from U8 or U10 tool steel. The material must be strong but flexible, with a thickness of 0.4-0.8 mm for cutting hardwood. When you create the blade yourself, you will need to use an angle grinder to cut teeth in the metal, separate them and sharpen them, and then solder the tape into a solid ring with a gas burner and grind the seam.

Another simple scheme suggests making a mini band saw for wood with your own hands from an electric jigsaw. The algorithm is proposed as follows:

For serious work and cutting logs and large boards, a band saw from a jigsaw with your own hands will not work. But small workpieces with its help will be very convenient to process.

What materials and tools will be required to make a saw

The set of tools and supplies for creating a band saw with your own hands at home may vary depending on the features of the chosen design. But, as a rule, without fail for the construction of the machine tool is required:

Also, when making a band saw with your own hands, you will need to use the following tools: