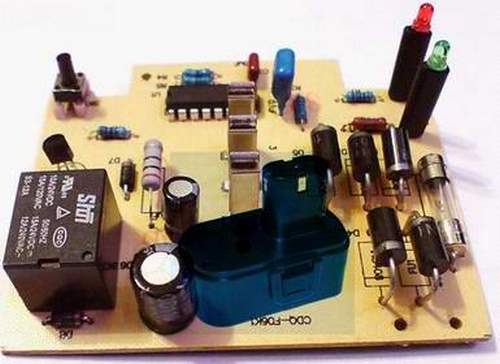 The power part of the screwdriver’s charger is a GS-1415 type power transformer rated at 25 watts.

A reduced alternating voltage of 18V is removed from the secondary winding of the transformer; it follows at diode bridge of 4 diodes VD1-VD4 type 1N5408, through a fuse. Diode bridge. Each 1N5408 semiconductor element is rated for forward current up to three amperes. The electrolytic capacitance C1 smoothes out the pulsations that appear in the circuit after the diode bridge.

Management is implemented on microassembly HCF4060BE, which combines a 14-bit counter with the components of the master oscillator. It drives a S9012 type bipolar transistor. It is loaded on a relay type S3-12A. Thus, a timer is implemented in circuitry that includes a relay for about an hour. When the charger is turned on and the battery is connected, the relay contacts are in the normally open position. The HCF4060BE receives power through a 12 volt 1N4742A zener diode, because about 24 volts go from the output of the rectifier.

When the button closes "Start" the voltage from the rectifier begins to follow the zener diode through the resistance R6, then the stabilized voltage goes to the 16th pin of U1. The S9012 transistor, which is controlled by the HCF4060BE, opens. The voltage through the open junctions of the transistor S9012 follows the relay winding. The contacts of the latter are closed, and the battery begins to charge. The protective diode VD8 (1N4007) shunts the relay and protects the VT from a reverse voltage surge that occurs when the relay winding is de-energized. VD5 prevents the battery from discharging when the mains voltage is disconnected. With opening contact buttons "Start" nothing will happen because the power goes through the VD7 diode (1N4007), the Zener diode VD6 and the quenching resistor R6. Therefore, the microcircuit will receive power even after releasing the button.

Interchangeable typical battery from a power tool assembled from separate serially connected nickel-cadmium Ni-cd batteries, each of 1.2 volts, so there are 12 pieces. The total voltage of such a battery will be about 14.4 volts. In addition, a temperature sensor has been added to the battery pack. SA1 it is glued to one of the Ni-Cd batteries and fits snugly against it. One of the terminals of the thermostat is connected to the negative of the battery. The second pin is connected to a separate, third connector.

When a button is pressed "Start" The relay closes its contacts, and the process of charging the battery begins. The red LED lights up. After an hour, the relay breaks the screwdriver battery charge circuit with its contacts. The green LED lights up, and the red goes out.

The thermal contact monitors the temperature of the battery and breaks the charge circuit if the temperature is above 45 °. If this happens before the timer circuit works, it indicates the presence of "memory effect".

Over time due to wear of the button "Start" it works buggy, and sometimes it doesn’t work at all. Also in my practice, the Zener diode 1N4742A and the HCF4060BE microcircuit took off. If the charger circuit is working and does not cause suspicion, but the charge does not start, then you need to check the thermal switch in the battery pack by carefully disassembling it.

The basis of the design is an adjustable positive voltage stabilizer. It allows operation with a load current of up to 1.5A, which is enough to charge the batteries.

An alternating voltage of 13V is removed from the secondary winding of the transformer, rectified by a diode bridge D3SBA40. At its output is a filter capacitor C1, which reduces the ripple of the rectified voltage. From the rectifier, a constant voltage is supplied to the integral stabilizer, the output voltage, which is set by the resistance of the resistor R4 at the level of 14.1V (Depends on the type of battery of the screwdriver). The charging current sensor is the resistance R3, in parallel with which the tuning resistance R2 is connected, with this resistance the level of the charging current is set, which corresponds to 0.1 of the battery capacity. At the first stage, the battery is charged with a stable current, then when the charging current becomes less than the value of the limiting current, the battery will be charged with a lower current to the stabilization voltage DA1.

The charge current sensor for the HL1 LED is VD2. In this case, HL1 will indicate a current of up to 50 milliamps. If R3 is used as a current sensor, then the LED will turn off at a current of 0.6A, which would be too early. The battery would not have time to charge. This device can also be used for six-volt batteries.

An amateur design is used to discharge and charge 1.2 Ah NiCd batteries. At its core. This is an improved typical charger of a screwdriver, in which a circuit is installed that controls the additional discharge and subsequent battery charge. After connecting the battery to the charger, the process of discharging the battery with a current of 120 mA to a voltage of 10 V starts, then the battery starts charging with a current of 400 mA. The charge stops when the voltage on the battery of the screwdriver reaches 15.2 V or according to the timer after 3.5 hours (programmed in MK firmware).

When discharging, HL1 is constantly lit. During charging, the HL2 LED lights up and blinks at intervals of every 5 seconds HL1. After the battery is charged, upon reaching the upper voltage level, HL1 begins to flash rapidly (2 blinks with a pause of 600 ms). If the charge is interrupted by a timer, then HL1 flashes once every 600 ms. If the supply voltage disappears during the charge, the timer stops. And the PIC12F675 microcontroller receives power from the battery, through a diode, inside the VT2 transistor. Firmware for MK at the link above.