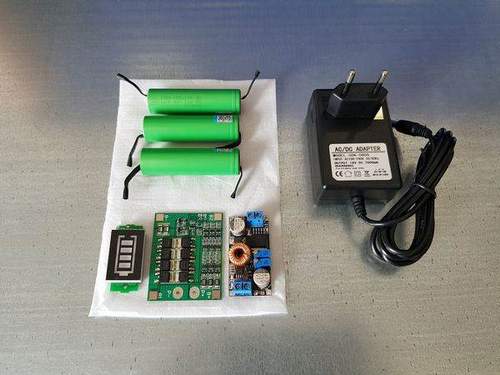 For several decades, screwdrivers have been used in various jobs. These devices are powered by nickel or cadmium batteries. But progress does not stop, scientists have found a replacement for such obsolete batteries. They were replaced by lithium analogues. To use such a battery, you need to remodel a screwdriver. A lithium battery will enhance the technical characteristics of the old tool. over, such a rework may be performed independently, without resorting to the services of special firms.

The lithium screwdriver battery has several advantages that were not found in the cadmium counterparts.

The energy density of the battery of a Li ion screwdriver is much higher. The battery with lithium banks is light in weight, and the voltage of 12 volts, as well as the battery capacity, remains unchanged. Lithium batteries charge faster than ion devices. Safe charging lasts about 60 minutes.

Lithium-ion batteries do not have a “memory effect." In other words, they do not need to be fully discharged in order to be charged. Among the positive qualities of a lithium battery, there are a number of disadvantages that need to be considered:

Algorithm for redesigning the battery for a lithium-ion battery

How to remake a screwdriver to get the best performance? This requires strict implementation of a certain technological sequence.

The connection of the batteries is done in series, so the voltage rating of each element is summed up with the subsequent. That is, to get 14, 4 volts, you need four elements with a voltage of 3.3 V.

To remake a cordless screwdriver, you need to buy miniature batteries only from a well-known manufacturer. For example, LiFePO4 brand batteries manufactured by Sistem A123. The cell capacity reaches 2,300 mA / h. This value is sufficient for the effective operation of an electric tool. Cheap batteries made in China will not have much effect. They will quickly fail.

When choosing a battery for rework, it is necessary that copper strips be located on the terminals. Soldering such elements is much easier.

Soldering work requires a lot of experience. For example, a 40-watt soldering iron will heat up for a long time, you can just “go too far”. To start remaking ion batteries, you need to purchase the following parts:

A few words about the BMS board

It is designed to exercise control over the charge or discharge of the battery. CF-4S30A-A is designed for four banks of 18650 batteries, giving a discharge current of 30A. The board is equipped with a special "balancer". It performs the function of controlling the charge of each element separately. This eliminates the possibility of uneven charging. For the board to function properly, the assembly batteries must have the same capacity. It is advisable that they be taken from the same block.

See also  How to compact sand without a vibratory plate

The industry produces a large number of BMS boards that differ in their technological characteristics. For reworking the battery of a screwdriver, a board operating on a current whose value is less than 30A is not very suitable. She will constantly turn on protection mode.

To restore operation, some boards require a short supply of charging current. To do this, you will have to remove the battery from the case, reconnect the charger to it. The CF-4S30A-A has no such drawback. It is enough to release the trigger to turn on the screwdriver, if there is no current causing a short circuit, the board will turn on automatically.

The redesigned battery on this board can be charged with universal charging. The latest models, Interskol company is equipped with multifunctional charges.

Of course, any installation requires prior preparation. It includes several very important points. Before you begin to solder the parts, you need to determine how the battery compartment will be arranged. All the necessary elements should fit easily in it.
Then the new lithium batteries are sealed with tape. Since the contacts oxidize with time, they are cleaned with a fine-grained skin before soldering.

The nuances of the soldering process

First, the contact part of the battery is thoroughly degreased. Then tinning is carried out by heating the applied solder. POS-40 solder is most suitable for tinning.

The contact of the soldering iron with the battery contact should not exceed 2 seconds. The soldering process of the battery plus requires special attention. The most suitable are jumpers from copper wires with a cross section of more than 2.5 mm. sq. On all wires they wear cambric, which plays the role of a good insulator.

The connection of mini-batteries should be carried out by special jumpers according to the developed scheme. Jumpers can be metal strips or thin wires.

At the final stage, the wires are connected to the made conclusions of the compartment intended for the battery. If the assembly of the assembly unit is difficult, it is necessary to remove the stiffeners. Since they are made of plastic, they can be easily eaten with ordinary side cutters.

To connect to the memory, you need to choose the connectors that match the specific model. Soldering of connecting cables is carried out according to the electric circuit:

Of course, the installation of lithium-ion batteries has a large number of positive qualities:

However, these batteries are highly sensitive to the charging process. The voltage should always be at its minimum value, otherwise the Li-ion battery will quickly become unusable. To fulfill these conditions, you need another memory, the cost of which is an order of magnitude higher. The native memory of a screwdriver will not be able to charge a lithium-ion battery.

It is impossible to say unequivocally which battery is better for a screwdriver. Their service life depends on careful handling, on the exact observance of the instructions attached by the manufacturer.

Today, many manufacturers produce batteries. Among such a large assortment of lithium-ion systems, the most popular are: “Bosh” 10.8, with technical characteristics:

If we talk about the nickel-cadmium battery, the most popular brands are:

Russian batteries are designed for low voltage, differ from imported models only in price. They are much cheaper, but at the same time not inferior to their technical indicators. The most famous models are:

Lithium batteries have always been considered the most technologically advanced devices. But a tool with such batteries is much more expensive. You can, of course, redo your device and get rid of cadmium batteries. However, this will cause other problems. Therefore, everyone makes the decision to remodel a screwdriver for lithium, depending on the circumstances.